Force out at second ends the game

“We’ve worked all our lives for this,” said Zach DeMattio afterwards.  “There’s no better feeling.”

Zach was the hitting star for the Rockets (22-2) driving in all four runs with a single, double, and a sacrifice fly.

Zach’s sacrifice fly in the fifth inning gave NA a “comfortable” four-run lead, or so it seemed, with the way UMaine commit Nick Sinacola was pitching.

But Beverly (20-5) had other ideas.  In the bottom of the fifth the Panthers loaded the bases on a double (Ryan Munzing), single (Tim McCarthy), and a walk (Matt Collings).  That brought Northeast Conference MVP Spencer Brown to the plate.  Spencer reached the left field fence, cleared the bases, and BHS was within a run. 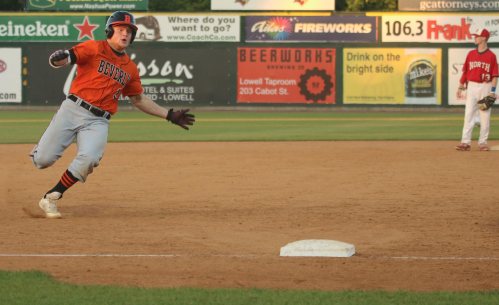 “They were a hitter or two better than we were today,” said Coach Wilbur.  “This game could have gone either way.”

The Panthers stranded two in the first and twice ended innings with a runner on third base.

“Nick (Sinacola) was going to stay out there no matter what,” said Coach Mike Hart afterwards.  “He has been our strength.”

There was little to choose between pitchers Spencer Brown and Nick Sinacola.  Both allowed six hits and struck out nine.

Spencer twice had a runner on third with no outs and escaped both times.  In the North Attleboro second, he struck out three straight, to end the threat.

The Panthers were within a run with two innings left but costly baserunning hurt them in each of the last two innings.

In the 6th, Matt Ploszay tried to stretch a single to right into a double.  RF Jeff Gale threw a strike to nail him.

In the 7th, Ryan Munzing walked leading off. When next batter Connor Hanlon squared to bunt, the pitch got a short distance away from catcher Zach DeMattio.  Ryan went well off the base and Zach alertly got him in a rundown.  Nick Sinacola applied the tag although Ryan was already out for going wide to avoid the tag.

The Panthers had an infield single later in the 7th inning by Tim McCarthy but Matt Collins’ grounder to second turned into a game-ending forceout.

The costly rundown in the seventh kept Spencer Brown from getting another crack at Nick Sinacola.

“They were doing the right thing to bunt him over,” said Coach Hart.  “He was the tying run.  Zach made a great play to get the out.”

Coach Wilbur may have been referring to those last two Beverly innings when he said, “These are high school kids.  Nothing is going to be perfect.  The kids played their butts off.”

Brendan McHugh gets one of NA’s six steals

Looking for another reason why the Rockets won the game?  Six stolen bases.  NA was able to move into scoring position via the steal in the run-producing first (Nick Sinacola) and fifth (Brendan McHugh) innings.

Nick Sinacola: “Early in the game my fast ball was working.  Later, my curve was too and that made a big difference.”

Coach Wilbur: “Spencer was right there with Nick Sinacola.  From the 4th inning on he was unhittable.  We had a great season winning two championships.”

The title was the first one ever for North Attleboro.

The Rockets (Hockomock League) only losses were to two Super Eight teams Mansfield and Franklin.

The Panthers were very disappointed by the loss, but Coach Wilbur saw the lighter side when he quipped regarding Spencer Brown’s wall-hitting triple, “If he had just done ten more pushups a day it would have gone over.”

NA coach Mike Hart was notified after the game that he had been selected as Division 2 Coach-of-the-Year.  The notifier was planning a photo-shoot in Braintree the next day.  Mike sheepishly said that he wouldn’t be able to attend.  Why?  He was getting married on Saturday!

I jokingly asked Mike what there was left for him to do!  This is a first-year coach leading North Attleboro to their first-ever state baseball title.  He answered by saying he wanted to develop baseball players and about his eight years with the program.  However, I’m guessing that in a week or so when the reality of all that has happened, including the wedding, hits him he will realize what an amazing time this has been for him.

The weather at LeLacheur was terrific. The internet?  Not so good afterwards, hence the delayed posting of this story.

Driving to Lowell during rush hour traffic is always a challenge when 495 is in the mix. 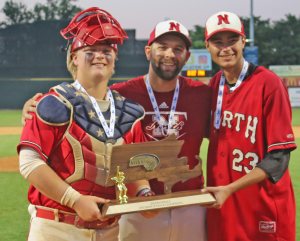 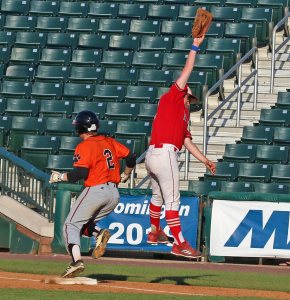 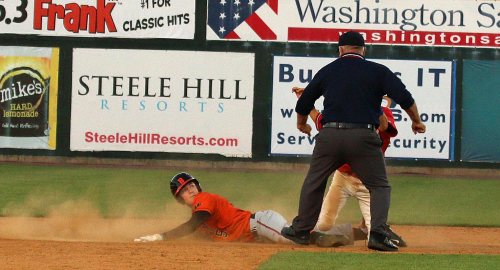 Matt Ploszay out at second in the 6th inning