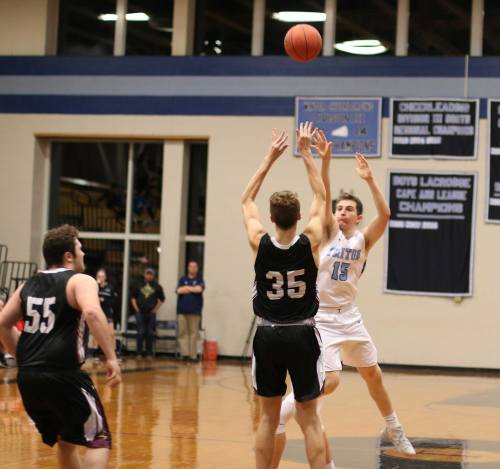 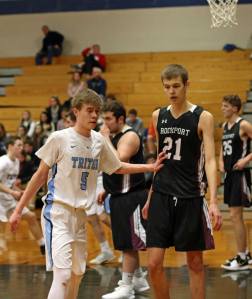 (Byfield MA) You hear it all the time, but how often does it mean anything?

Triton’s Kyle Odoy (16 points) dropped that line into our post-game interview tonight after his team rallied late in regulation and then went on to defeat Rockport, 54-51 in overtime.

Triton (5-2) certainly needed a miracle finish to get this one into overtime and they pulled it off.

Three straight free throws by Jake Knowlton (14 points) put Rockport (2-6) up, 48-43, with only twenty-three seconds left in regulation.  Comfortable lead…….or so it seemed.

“We had really good shots the whole entire game and we just missed them,” recalled Triton coach Ted Schruender. “We figured that they would eventually start falling.”

And fall they did as Kyle Odoy drained two straight from long range in the closing 23 seconds.

The first last-minute triple was on an inbounds play from in front of the Triton bench with eleven seconds remaining.  The second was of the “Hail Mary” variety from straight away.

“I just got it and chucked it,” said Kyle describing the buzzer-beating second one. 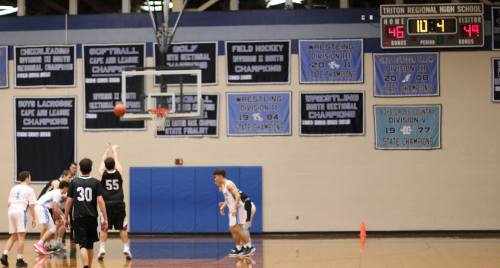 Noah Rawson at the line in the closing seconds of regulation

In between the two Kyle triples, Noah Rawson (10 points) made one of two free throws for Rockport.  Noah missed the second and there was a tie-up.  The possession arrow favored Triton and gave them time to come down for the final shot.

If you’ve read this far, you’re probably saying something like, “The game wasn’t won in regulation so what happened in the four-minute OT?”

“Not much,” would be the answer!

Noah Rawson tied the game (51-51) with a layup halfway through OT.  Kyle Odoy then put Triton in front for good with 1:45 left on a jump shot. 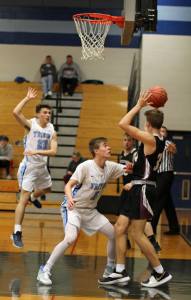 After that the Triton man-to-man defense kept Rockport away from the basket.  The visitors didn’t turn the ball over, they just couldn’t get their outside shots to fall.

On the other end, Triton took the ball to the basket and forced fouls.  That “it’s not over ‘til it’s over” thing was still in play because Triton missed four of five free-throw attempts.  Rockport had three possessions to catch up but not on this night.

“We had just enough to win,” said Coach Schruender.

TJ Overbaugh (8 points) hit a three in the closing seconds of the first period.  Max McKenzie (16 points) drove the length of the court to end the third period with a layup.  I guess we should have expected that something could happen at the end of regulation!

Triton had a 28-20 lead a minute into the third quarter.  Ezra Mendoza, Gavyn Hillier (14 points), and Austin Matus put points together and knotted the score at 30-30. 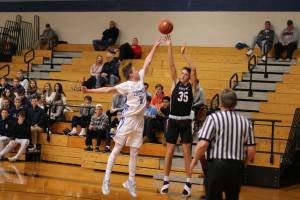 Rockport used a 1-3-1 zone defense and kept Triton away from layups.  Triton passed and dribbled their way into open looks but couldn’t make shots.

Triton’s man-to-man kept Rockport from doing much damage in close.  A few times 6-7 Jake Knowlton was able to get the ball inside and finish.

Max McKenzie took the ball to the basket even against the Rockport zone. He was also a key defender. 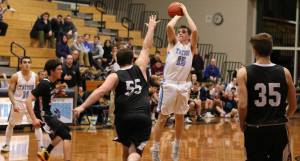 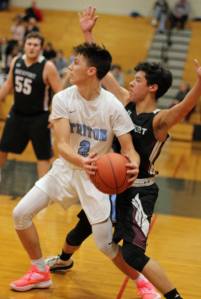 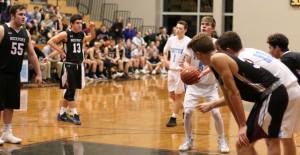 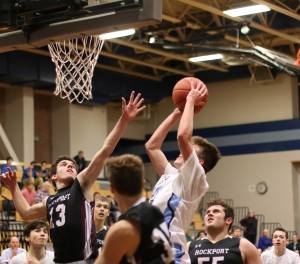 Max McKenzie to the basket in overtime 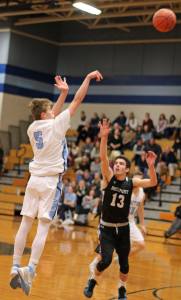 Pressure on the ball by Kyle Odoy 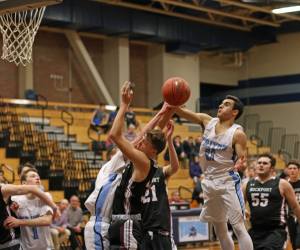 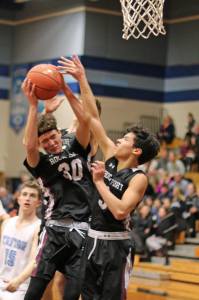 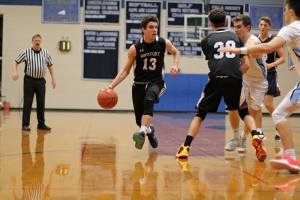 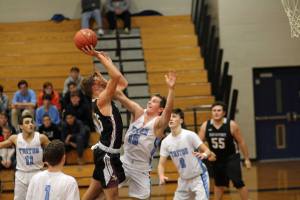 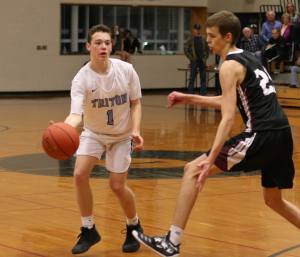 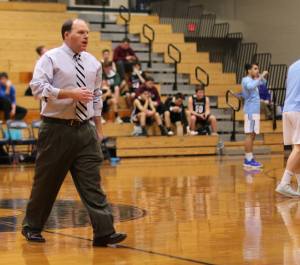