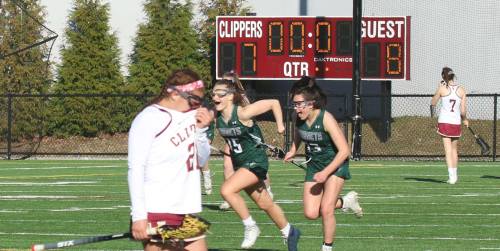 (Newburyport MA) What a difference a week makes!

Manchester-Essex won their third game of the week, edging Newburyport, 8-7, on a sunny Thursday afternoon at Newburyport.

Meanwhile, the Clippers, with only two losses in the last two seasons, suffered their second loss of this week.

Abby Lantz (7) in the middle of the action

Senior Abby Lantz netted the game-winner with 4:26 left and was quick to credit her teammates: “That last goal was the climax of what my teammates were doing throughout the entire game.” 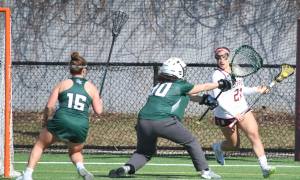 Newburyport (1-2) dominated the first fifteen minutes getting two goals from sophomore Sam King and one from junior Maggie Pons.

“Being down early (3-0) didn’t bother us,” said ME coach Nan Gorton. “We like the challenge.  The same scenario happened against Marblehead (14-6 win).  We just had to figure out what they were trying to do and see how we were going to beat it.”

That “figuring out” happened in the final 6+ minutes of the first half as the Hornets, with goals by Brigid Edgerton, Lily Athanas (2), Emma Cochand, and Gianna Huet, left with a 5-3 halftime advantage.

The second half was tense.  Katie Hadden tied the score at 6-6 and later teammate Maggie Pons tied things at 7-7 with 5:47 left. 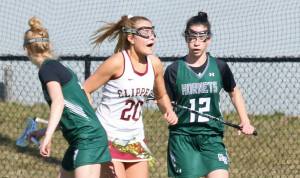 Lafayette College commit Abby Lantz tallied the decisive goal 1+ minutes later and ME held on to end a six-game losing streak to Newburyport.

“It feels really good to beat them,” said Abby afterwards.  “We came into the game with those past experiences as fuel for us.”

Last year the Hornets were a very good 17-4 but three of the defeats were to the Clippers including the D2 North finals.

“We did a better job in this game in the second half of finding open girls,” said NHS coach Catherine Batchelder.

“Lacrosse is a game of momentum,” added Coach Batchelder, “wherever the draw goes is where the goals go.  We had trouble possessing the ball in the draw and that enabled them to get back in the game.”

Maggie Pons looks for an opening as Isabel Amigo defends

The defense of Lily Athanas on Maggie Pons (Cornell commit) was a key to the win.  “She did a nice job shadowing a great player,” said Coach Gorton. Maggie had 112 goals last season but only two this afternoon.

The ME coach also commended goalie Bella Pomery: “She is one of the best of the best.  She’s also a great teammate.  She tells everyone in front of her where to be and where not to be.”

Bella made a huge save on Sam King in the closing minute.

Coach Batchelder: “We’re just very young.  We’re still trying to find our way out there. They stayed composed in a lot of different situations this afternoon.”

Abby Lantz came from behind the net on the winning goal and perfectly executed a crease roll.

Abby on her choice of Lafayette College (Easton PA): “Throughout high school I’ve been playing club soccer.  That got me a lot of exposure.  Lafayette (Division 1) reached out to me and later, after visiting, I reached back.  When I step on their campus, I get butterflies.  As far as I’m concerned, it has the perfect balance of academics and athletics.  I am interested in government and psychology.  I have met the other nine recruits and played with the team and interacted with the coaching staff.”

Excellent April weather…….sunshine and temperatures in the upper fifties.

There will be a rematch at Manchester on May 21st. It would also seem likely that the two teams could meet for a third time, like last year, in the tournament.

I would expect a little more scoring from Maggie Pons in the games ahead.  Too many minutes off the field today because of infractions. 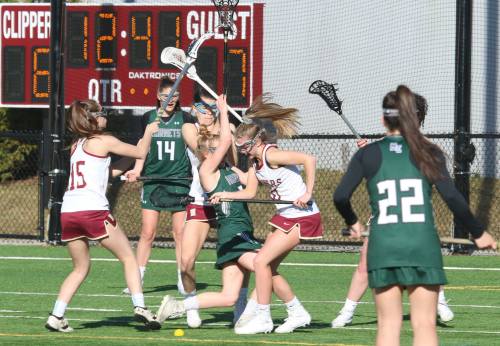 Ball on the ground 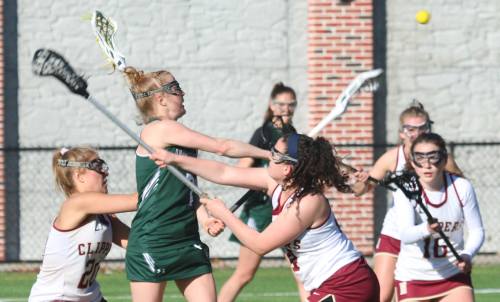 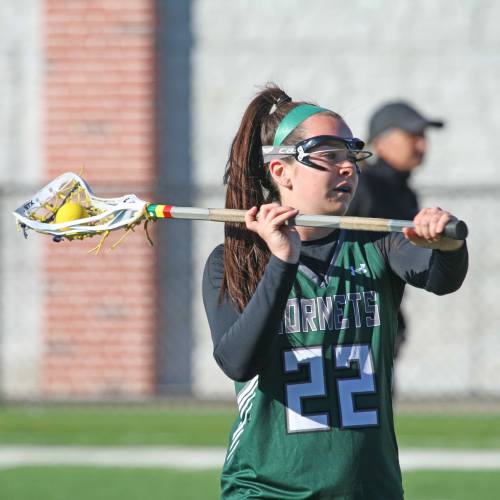 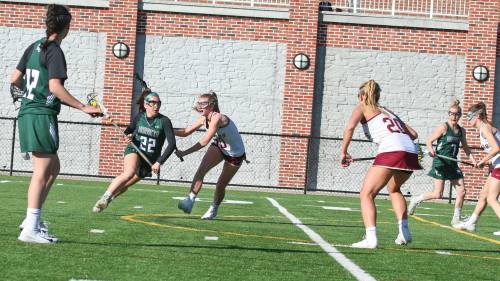 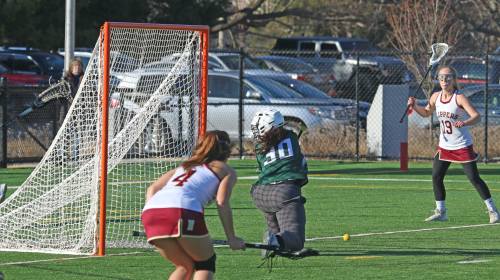 Bella Pomeroy makes a save 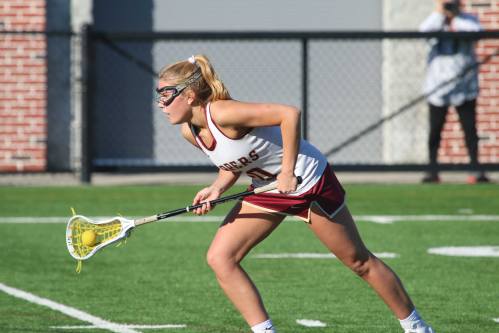 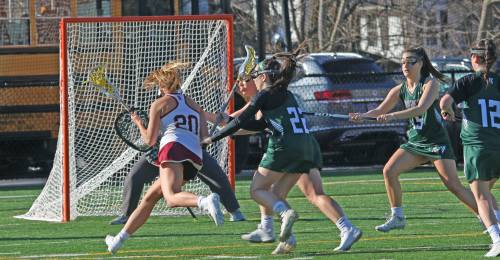 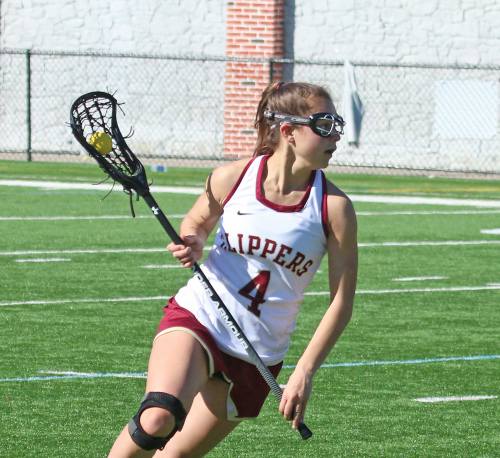 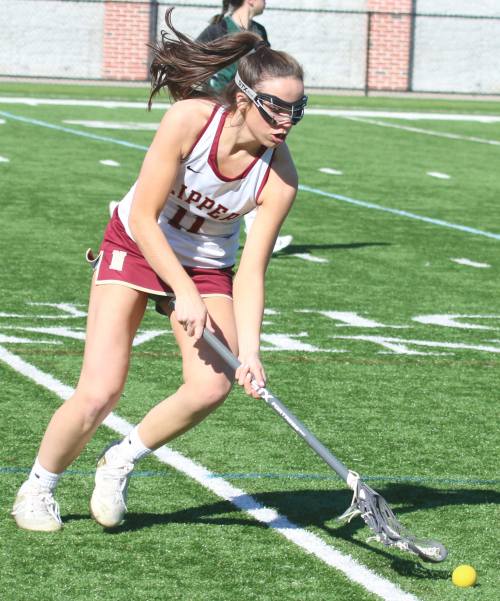 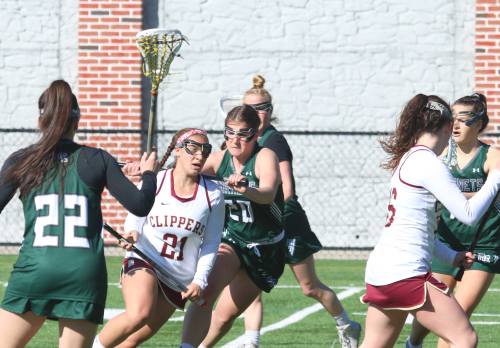