Katherine Quigley (11) and Arielle Cleveland (21) at the net

(West Newbury MA) What a difference a month makes!

Pentucket continues winless in their first volleyball season but their improvement was noticeable.

“Pentucket has improved considerably since the last time we saw them,” said Triton coach Bob Van Etten after tonight’s match with the Sachems. “Their middle was a lot better.  They passed better and were able to work the middle.  It was a hard-fought win for us.”

The Sachems reached a season-high twenty-two points in the second game.

“Our confidence is getting better,” said Pentucket coach Lauren Bennett.  “The skill levels have improved so much.”

Mia Berardino was the star of the show for the (5-11) Vikings.  The tall sophomore was able to produce a steady flow of serves and hits that gave the home team trouble.

“She (Mia) had an outstanding night,” said Coach Van Etten.  “She had a lot of kills, smart hits, and great serves.”

“Mia is very, very talented,” said junior Macey Cowl of Pentucket.  “When she gets set up you know it’s coming and it’s coming hard.”

In the first game, the Sachems rode some Triton errors and Arielle Cleveland hits to a 15-12 lead and a Vikings timeout.  After the timeout, the team from Byfield put a lengthy run together.  The Vikings won ten straight points, with sophomore Molly Kimball serving and Mia getting set up for kills, and Triton gained separation, 22-15.

The best takeaway for Pentucket would be the second game.  The Sachems trailed early, 6-2 and 10-6 before rallying on Triton miscues and Arielle’s serves to tie things at 16-16.  Later a serve by senior Caitlin Kutcher hit the net and dropped in and the game was tied 22-22.  But along came Mia Berardino.  Three straight times she was beautifully set up for kills and Triton escaped 25-22.

“I give so much credit to our setters,” said Mia afterwards.  “They did such a great job putting the ball on the net so that we could hit it down.”

The Sachems never led in the final game, but the deficit was small (16-15) late in that game.  The biggest cheer from the Pentucket faithful was after sophomore Nicole Zahornasky was able to block one of Mia’s kill attempts and have the rebound drop in for a Sachems point.

Coach Van Etten gave special credit to Molly Kimball: “We were playing a 6-2, not a 5-1, so Molly was only getting half the touches.  For her to get nineteen assists under those conditions was huge.”

Jillian Sheehy: “We had some people step up tonight.  We could have won.  This was one of our best games.” 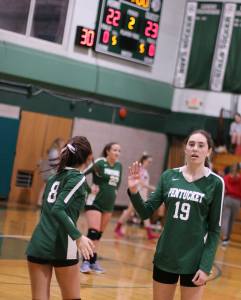 Macey Cowl: “Our serves were good.  We had some really nice rallies.  We’re getting there.”

“We have more wins than we had last year already,” said Mia.  Mia was a Cape Ann League All-Star last year.

Arielle Cleveland: “Volleyball is helpful for basketball.  It improves my anticipation and my jumping.  I enjoy the game a lot.  We’re progressively getting better.  I have been playing AAU basketball on a team that has been winning a lot of games.”

Mia Berardino: “A lot of things worked tonight.  It was a loud crowd, but we stay focused.”

Coach Bennett: “I could see the disappointment in the girls’ faces afterwards and in some ways I liked that.  Even though this was our best game, the girls still want more.”

The quest for that elusive W will continue for Pentucket.  The rematch ahead with Georgetown might be the place for it to happen. 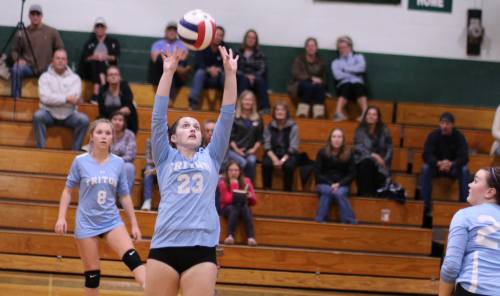 Hit in the middle 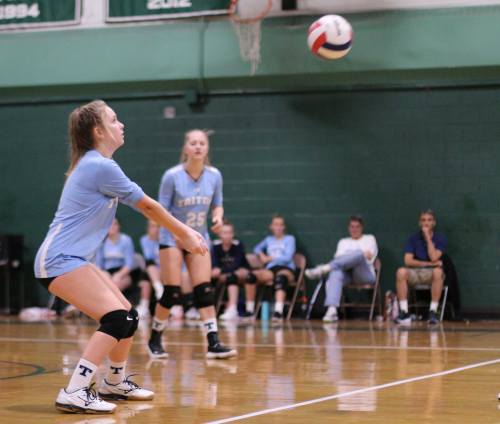 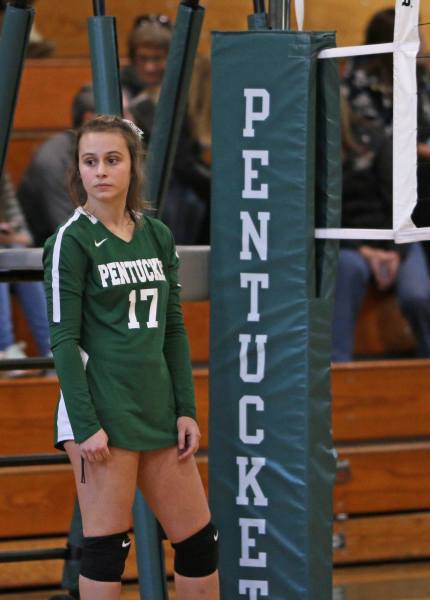 Waiting for a serve