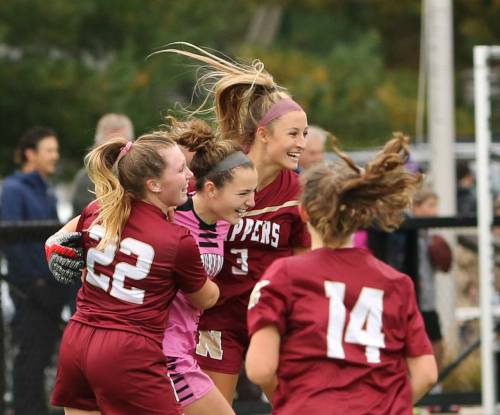 Clippers celebrate a 3-0 shutout over Pentucket

Meaghan O’Leary sets up for a direct kick.

(Newburyport MA) She couldn’t have picked a better time.

The win kept the coveted ALS Cup in the possession of the Clippers.

Pentucket (8-4-2) has yet to win the ALS Cup in the annual crowd-drawing event.

There was valid optimism that today might be the day for the Sachems’ drought to end.

Pentucket had a 6-5 win over the Clippers on September 10th at West Newbury.  The Sachems were down twice by two goals in that back-and-forth contest but rallied to stun the visitors.

The Sachems could score (46 goals) and they had the character to rally back if necessary.

On this cloudy afternoon, however, the Clippers kept both of those things from happening.

“The differences this time,” said NHS coach Kevin Sheridan, “were the organization of our defense, the discipline of our defense, and the communication all the way from the keeper to the strikers in terms of who’s covering who.  That first game was a wakeup call for us.”

“We came out in the second half determined to crush any hope they had of winning,” explained captain Molly Elmore.  “There was no letup.  We played the full eighty minutes.”

“Newburyport was very organized and defended well,” said Sachems coach Dan Millard.  “We had scored forty-six goals but got none today.”

Eight minutes into the first half (32:19), Meaghan O’Leary’s direct kick from the right deflected off the fingertips of Pentucket netminder Ashlynne Reade to put Newburyport in front, 1-0.

The visitors had some good chances to tie the score in the first half.  The best may have been with less than two minutes when Sabrina Campbell sent a ball into the middle that GK Anneliese Truesdale caught with Mackenzie Currie bearing down on her.

“We were better in the first half than we were in the second,” recalled Coach Millard.

The Clippers were awarded two direct kicks within the span of four minutes in the second half.  Meaghan O’Leary cashed the second one at 25:41.

“We practice a lot of free kicks,” said Meaghan.  “We have about ten girls that can take really good ones.  I was lucky enough to be the one who stepped up.”

Meaghan’s second goal (25:41 – second half) was off a direct kick from straight away.  Both of her goals were driven toward the upper left side and deflected off GK Ashlynne Reade into the net.

Another set play produced the third goal at 14:26. Senior Cricket Good had plenty to do with this one.  The St. Anselm’s commit came across from the right into the middle and fired a shot back toward the right post that GK Ashlynne Reade make a brilliant save on.  The deflection gave Newburyport a corner kick from the right corner.

Cricket’s 13th goal was off a corner kick with her left foot that was sent low toward the goal.  Ashlynne came out to get the ball, between two teammates, but the hard shot deflected off her hand into the net.

Down 3-0 with fourteen minutes remaining, the Clippers had the lead and the solid defense to keep the shutout.

Referencing the three goals on set plays, Coach Millard said, “There were things out of our control.”

The key defensive player for the Clippers was sophomore Izzy Kirby. Izzy had the job of trying to contain high-scorer Mackenzie Currie.

GK Anneliese Truesdale: “Izzy was always there to help with Mackenzie.”

“When their top guns received the ball, we had them marked and we had help there as well,” said Coach Sheridan.

A large crowd enjoyed the middle game of today’s triple-header at Stehlin Field.  Only on a turf field could you play a football game and two soccer games, after a night of rain, and still have a great field in place.

Anneliese Truesdale: “In the beginning of the season I struggled with high shots but Coach (Sheridan) had worked a lot on it with me.  Give credit to Pentucket.  This is the toughest competition we’ve seen in the ALS Cup.”

Cricket Good: “We were expecting a ton of goals, but we did a good job of knowing their players this time specifically.  It could have been a closer game, but Anneliese had some amazing saves.”

Olivia Sullivan: “We knew what we had to do after the first game with Pentucket.  We came out with plenty of energy this time.  Everyone was focused in warmups.”

Molly Elmore: “Today’s game was bigger than us.  It was for a cause.  I have been going head-to-head with Jacey Jennings for a couple of years.  I tried to find her because she can be a big threat.  She has a good shot.”

Coach Sheridan: “Pentucket is a really good team.  We expected them to come out firing in the second half and we knew we had to match them.  It was a great statement game for our girls.  They are thrilled to maintain the cup.”

The Clippers have now won four straight and allowed only one goal during the win streak.

You couldn’t help but notice how dangerous Mackenzie Currie can be.  The combination of size, strong shot, and hustle make her a constant threat.

Cricket Good received a yellow card in the second half.  She was sent off in the first half. “The first time off I said that I’d keep my mouth shut and figure it out,” she said. “There’s still work to be done.”

Both teams are in Division Three.  “I’m hoping that maybe we can play them again in the tournament,” said Coach Millard.  The Sachems have already made the tourney.  The Clippers need a win or two ties in their remaining schedule to also qualify.

Another Division Three Cape Ann League team is Lynnfield.  They have beaten Newburyport twice and Pentucket once.

That 6-5 win in September was the first time Pentucket had defeated Newburyport in NINE years.  From 2013-2018, in twelve meetings with the Clippers the Sachems had scored only TWO goals. That is why that 6-5 win sent the message that things had changed in West Newbury. 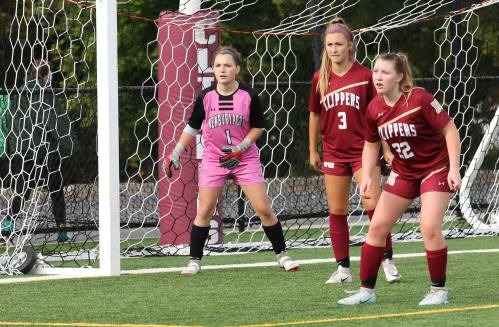 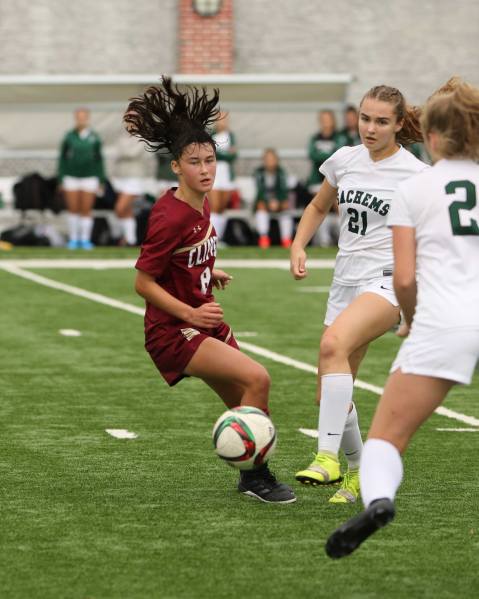 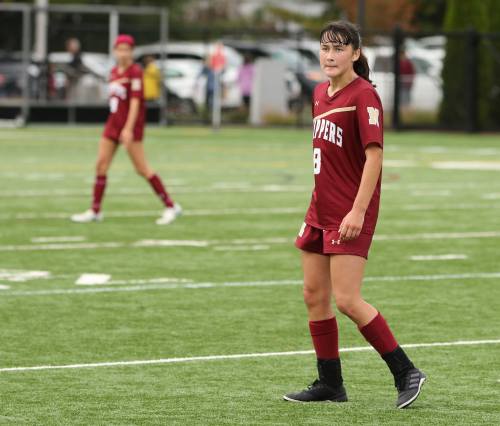 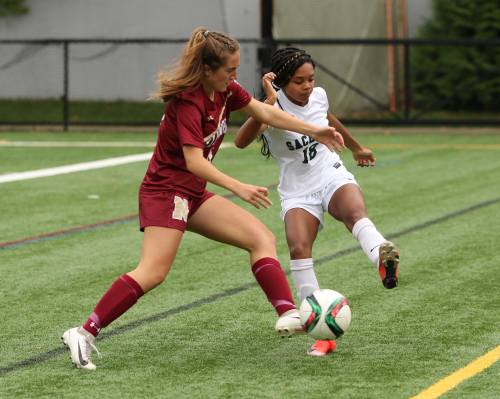