Sydney Yim unleashes a hard hit at the Whittier defenders

And I wasn’t the only one impressed by junior Sydney Yim of the Newburyport Clippers.

“She’s one of the best I’ve seen,” said Whittier coach Paul Bonosaro after his team fell, 3-0, to Newburyport on Wednesday evening.

“I committed to Purdue on Friday,” Sydney told me after the win over Whittier.  “I visited there and enjoyed the campus.  I also had a really good connection with the coaching staff there.”

No question that the Division One Boilermakers (West Lafayette IND) had an advantage.  “My mom went there, and she encouraged me,” laughed Sydney.

“We certainly competed in the last set,” said Coach Bonosaro.  “We needed just a few things to go our way to win it.”

But those “few things” were missing for Whittier (10-4) much of the night.  “We had too many service errors and too much miscommunication,” he recalled.

The Wildcats (10-4) have qualified for the post-season and since both teams are in Division 2 North they could meet again, for the third time.  The Clippers won at Haverhill, 3-1, on September 23rd.

The Clippers haven’t qualified yet for the tournament although just one win in the final six games will get that job done.

“Our ability to communicate was a huge part of tonight’s win,” explained NHS coach Lori Solazzo.

She added that it certainly helps to have a player like Sydney on the team.

I asked Coach Solazzo how her team has become so good so quickly: “The girls have really dedicated themselves to getting better.  Many of them have worked at it during the off-season.  There’s interest in the school in volleyball.  We had sixty-four girls try out.”

Grace Efosa will play basketball for Providence next year

The second set was all Newburyport.  Sydney Yim (14 kills, 5 aces) led NHS to a 13-5 advantage.  One time it was serving.  Another it was dropping a shot into an open space.  In one sequence Sydney served a ball that wasn’t handled in the Whittier second row.  A replacement was inserted by Coach Bonosaro to that spot.  A hard serve by Sydney went to the same spot with the same result.

The third set was close.  Grace Efosa had the team from the Commonwealth Athletic Conference up 3-0 early.  But the Clippers (Cape Ann League) used a Sydney soft shot and a Sydney kill to get in front 18-13.  Credit Whittier, they didn’t pack it in.  They rode a drop-in by Meghan Jegerow and an ace by Alyssa Michel to trail by only one, 21-20.  Coach Solazzo called a timeout.  And she called another one after an ace by Alicia Habib tied the score at 23-23.  But that was the best Whittier could do.  A long hit and then a mishandled volley gave the home team the two points they needed to win the match.

“We did a good job of communicating tonight after a rough start,” explained Sydney.  “We gradually ended up learning more about the other team and adjusting to what they had do offer.”

Coach Bonosaro: “We tried to block her (Sydney Yim) and take her out of the game.  We did our best.”

I hadn’t been in the Newburyport gymnasium since the boys team lost in the DNorth basketball playoffs to Dracut.  I was delighted with the bright lights.  On the lesser side, the low ceiling was certainly a factor.  With the ceiling actually in play, there were several awkward volleys.  I heard one Newburyport fan explain to someone nearby that the “ceiling was the team’s Seventh Man.”

Whittier’s Alyssa Michel had twenty service points in the first meeting with the Clippers.

It was interesting to have two Division One college commits on the floor at the same time.  You know about Sydney and Purdue.  The other D1 commit was Whittier senior Grace Efosa who will play basketball at Providence College for the Friars.

Coach Bonosaro is in his first year as head coach.  He was an assistant coach at Whittier for fourteen years.

Coach Solazzo played volleyball for Gordon College (Wenham MA) back in the day.  My wife and I were admiring spectators for quite a few of her games playing for Coach Val Ginn. 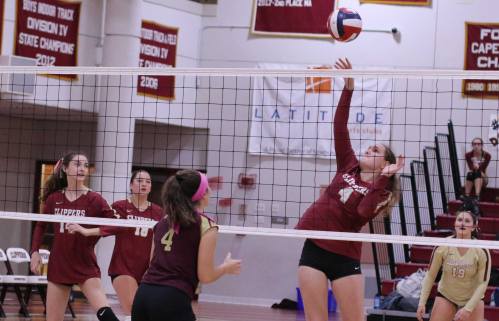 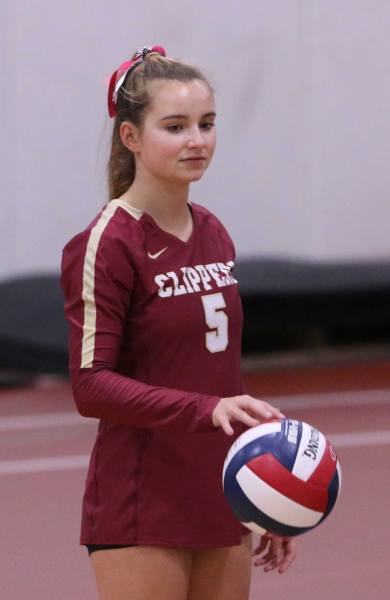 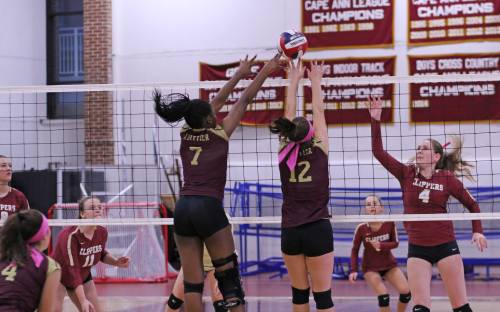 Battle at the net