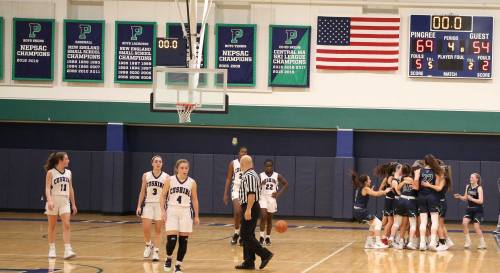 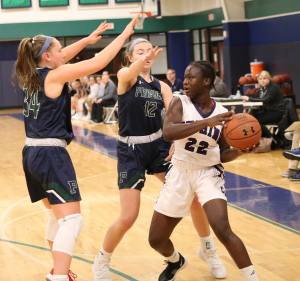 “I think that we were able to wear them down with our pressure,” explained Pingree coach Dave Latimer afterwards.

When pressure defense will make its mark on a game varies but when it happens the points will come in a cluster.  And that’s what happened in this game.

A jump shot by Cushing sophomore Katie Dolan tied that score at 29-29 with two minutes left in the second quarter.  This had the makings of a close game with an exciting finish.

But in a short period of playing time the closeness vanished, as well as the possibility of a tight finish. 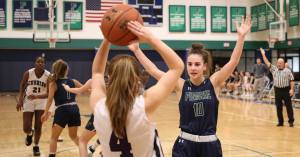 The Penguins didn’t score a point during the next 3 ½ minutes, stretching into the second half.

“I called a timeout in the last minute of the first half to try to settle us down,” said Cushing coach Emily Roller.  “We were only down four.  Credit Pingree, they kept their run going.” 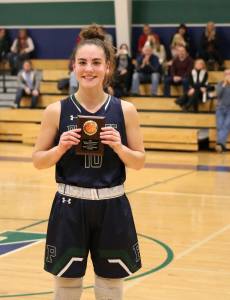 Maddy Mandalinci (tourney MVP) made shots all afternoon.  “When our defense is working and Maddy’s making shots, we’re going to be tough to beat.”

Maddy made nine of Pingree’s sixteen points in the game-deciding run.  She had three layups as well as a three assisted by Savanah Gibbs.

Cushing, meanwhile, had four turnovers during the segment in which the game got away from them.

“That press sped us up,” said Coach Roller, “and he (Coach Latimer) has the depth to keep running it.”

The Penguins (4-2) controlled the early part of the first period.  A jump shot by Katie Nolan (11 points) and consecutive three’s by Lily Stone (9 points) gave the visitors from Ashburnham (MA) a, 13-7, lead four minutes into the game.

Freshman Tori Farrell (14 points), however, helped Pingree rally back before halftime.  “Tori has a motor that doesn’t stop,” said Coach Latimer.  “She is a great defensive presence.”  Tori made the All-Tourney team. 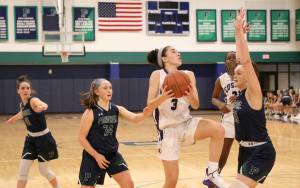 In the second half, Cushing put an 11-2 segment together and trailed only 49-42 with two minutes left in the third quarter.  Steals by junior Fanta Kone led to layups by Natahsa Shade and Erin Rutherford (14 points).

Seven points would be as close as Cushing would get.  An injury took sophomore Katie Nolan off the court and the tiring Penguins had no answers for Maddy Mandalinci’s late-game, hot shooting.

How hot was Maddy?  She scored fourteen of Pingree’s final sixteen points.  Cushing went zone in the second half and that gave the Union College commit open looks.

“I work hard on shooting,” said Maddy post-game.  Maddy had three 3’s in the final period. 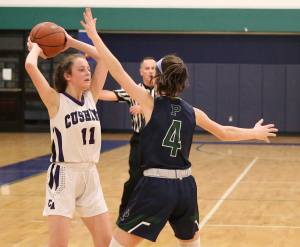 “We all worked together on defense,” said Maddy.  “Everyone has to contribute to make the press work.”

Cushing had a player (Katie Nolan) injured during the game and were missing senior captain Kate Montigny.  “Kate is a six-footer and could have helped us do a better job on the offensive glass.”

Coach Latimer: “It’s great to see the girls have some success winning a championship early in the season.  It gives us confidence.  Nine of our players are sophomores or freshmen.”

The Highlanders (4-2) have moved up from Class B to Class A this year.  Plenty of tough competition ahead for them. 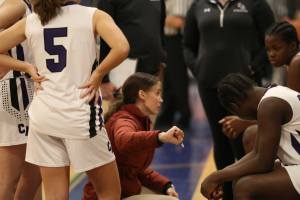 Coach Roller: “It’s early in the season.  There was lots of good stuff to build on for both teams.”

Maddy on choosing Union College: “I had an instant connection with all the coaches and players.  I am not sure what my major will be.  It might be psychology.”

I hadn’t been to Pingree since the new facility was built.  All I can say about it is, “Wow!”  Clean, nice lights, and plenty of space including an extra gym.  Nicely done. 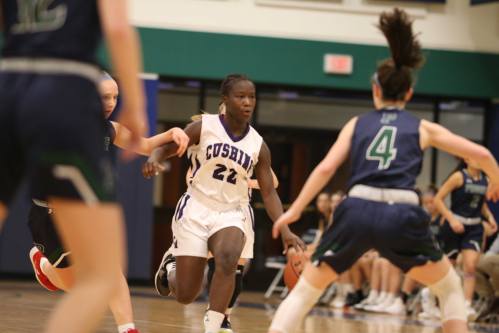 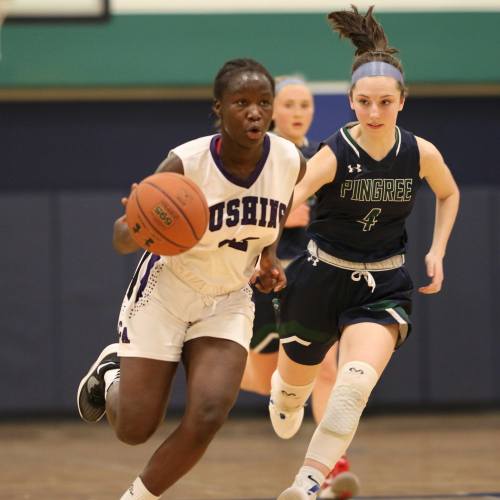 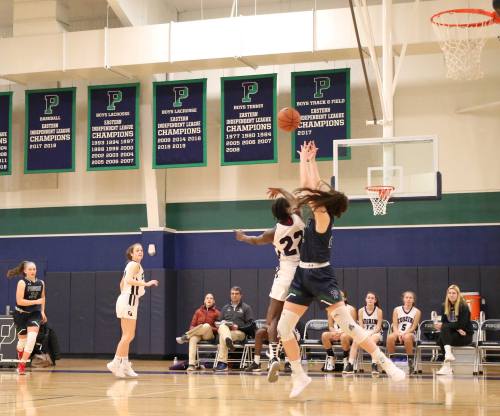 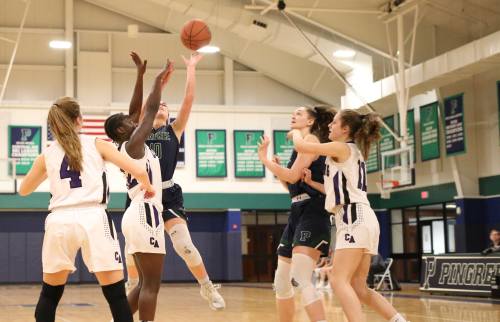 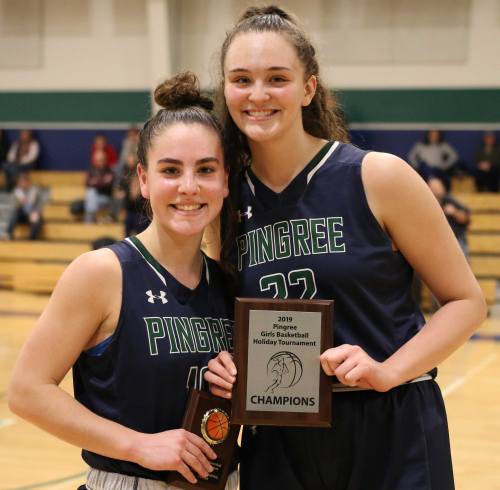 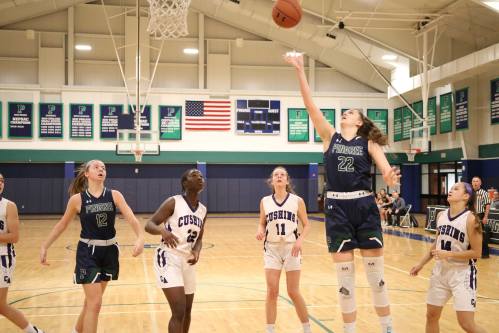 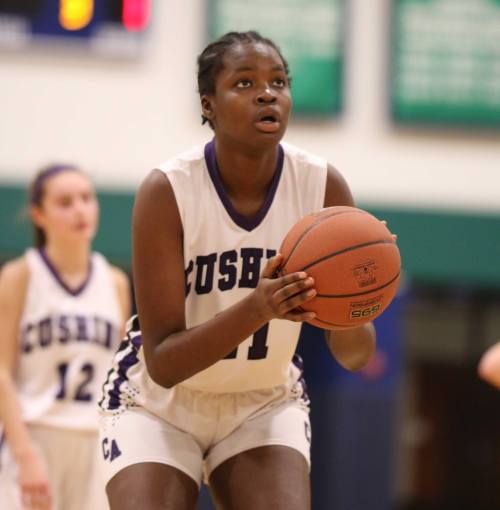 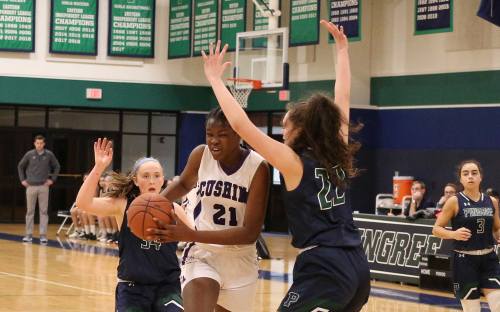 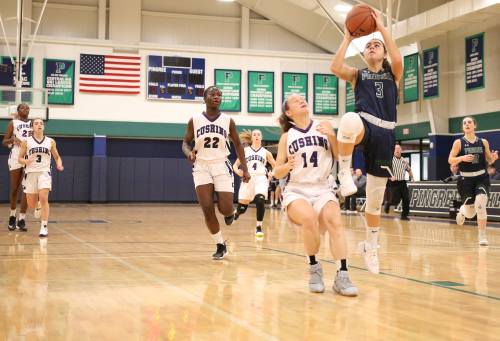 Alexa Garcia breaks in for Pingree 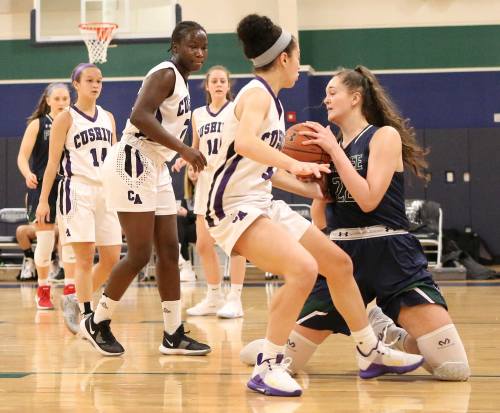 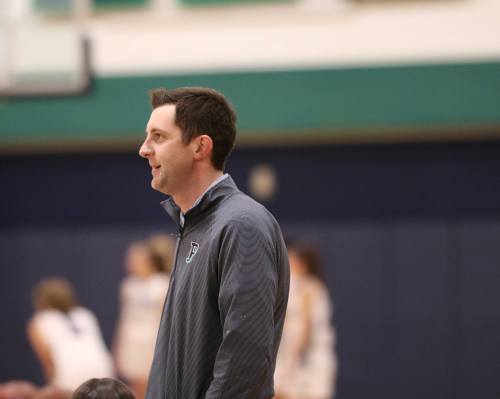 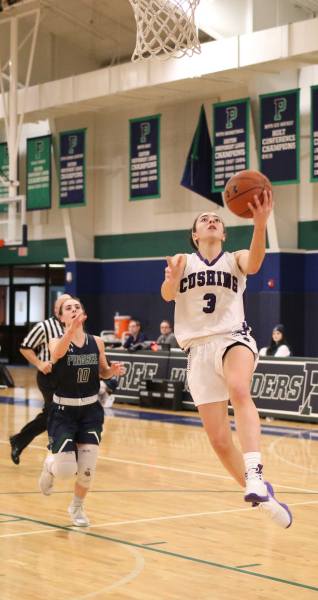 Erin Rutherford floats in for two 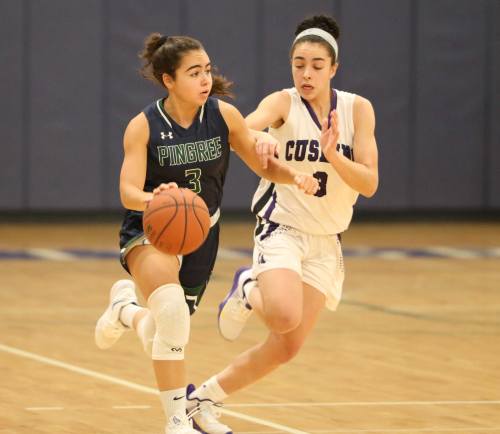 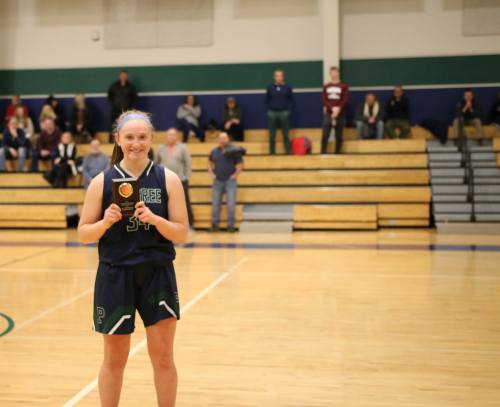 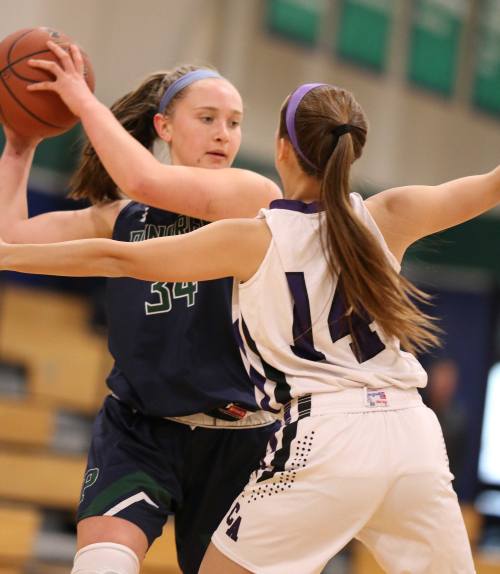