Parker McLaren (26) and Jake Robertson (23) too much for Triton 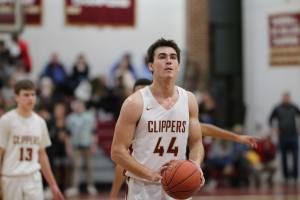 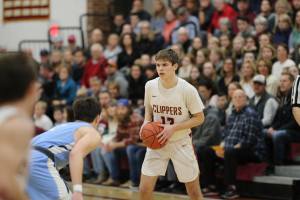 Tonight they defeated Triton, 81-58, and qualified for the state tournament. 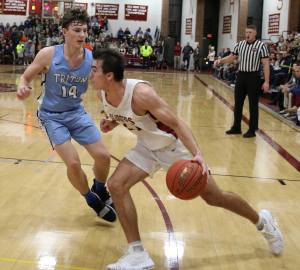 Last loss was a non-league event against Amesbury in December.  The rematch is scheduled for February 4th at Newburyport.

Triton (7-6) came out missing and the Clippers took full advantage.

“They can do everything,” said Mason Ferrick (15 points) afterwards.  “They can shoot from the outside.  They’ve got help down low to make layups.” 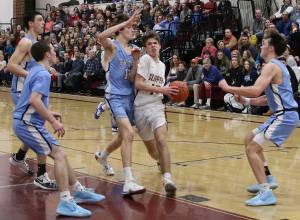 Jake Robertson collected two more three’s before the quarter ended and teammate Jack Felhner also added another one.  Triton trailed, 25-12, after one period.

The visitors put a 10-1 segment together in the second period to lessen their deficit to, 29-22, three minutes in.  Getting to the basket and the foul line sparked the comeback.  Senior Jesse Wilkinson turned an NHS miscue into a layup.

But on this night, the Clippers had responses for any and all of Triton’s comeback attempts.

The highlight of the second period was Parker McLaren’s steal of a cross-court pass that gave him a clear breakaway.  Off he went with time to look for anyone chasing him.  He rushed in for a resounding jam that was a genuine crowd pleaser.  NHS led at halftime, 39-31. 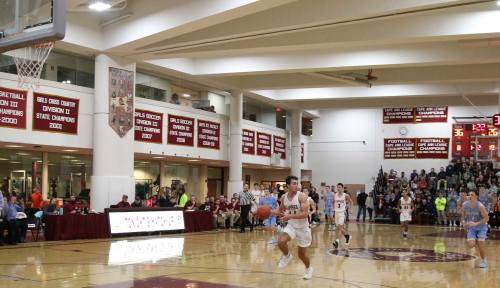 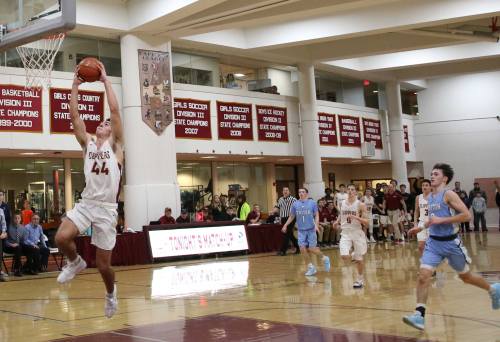 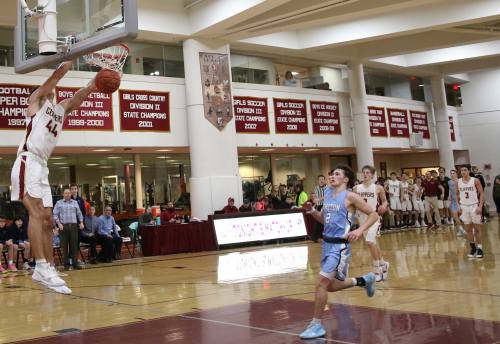 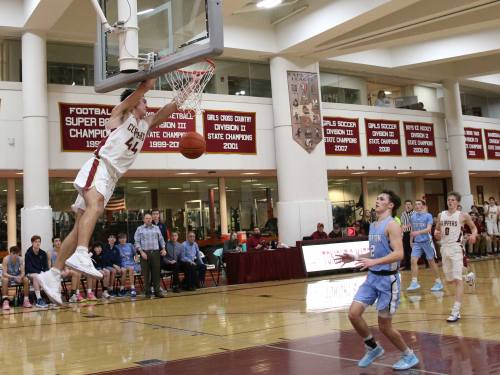 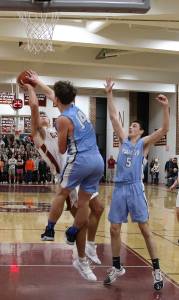 Newburyport began the second half with a Parker layup (assist Trevor Ward) and another Parker three (assist Jake Robertson). There was no stopping them tonight.

The Clippers had a double-digit lead for good in the third period and cruised in with the win.

The Vikings never stopped competing.  They took the ball to the basket and they defended aggressively.  Quintin McHale (12 points) got Parker McLaren into several jump ball situations.

“Parker is resilient,” said Coach Clay.  “That’s why he’s a leader and a captain in our program.  Some people wouldn’t continue attacking but he did.  I loved that dunk he had.”

It certainly hurt Triton when high-scorer Michael Farago had two fouls in the first 1 ½ minutes of the game.  His minutes thereafter were limited but he never fouled out.

“He (Michael Farago) doesn’t let things bother him,” explained Coach Schreuender.  “That’s why he was able to play so well (eight points) in the second half.”

Both teams played man-to-man.  Triton tried a zone for one (?) possession and Jake Robertson immediately connected on a three from the top of the key. 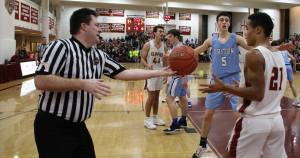 Impressed with the way that Newburyport took care of the ball.  Very few turnovers for the home team.

Good crowd of Vikings were on hand.

Mason Ferrick: “Newburyport is a good team and we didn’t have tonight what it took to beat them.  Now we get ready for Ipswich on Tuesday.”

Coach Schruender: “If we compete like we did today, we’ll have a lot of good situations in our future.” 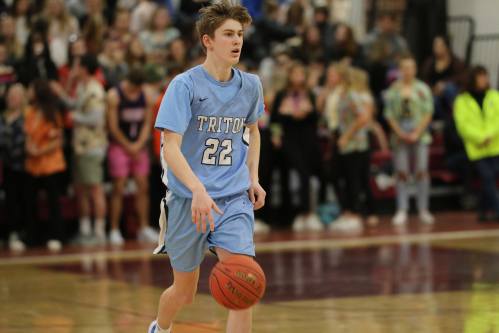 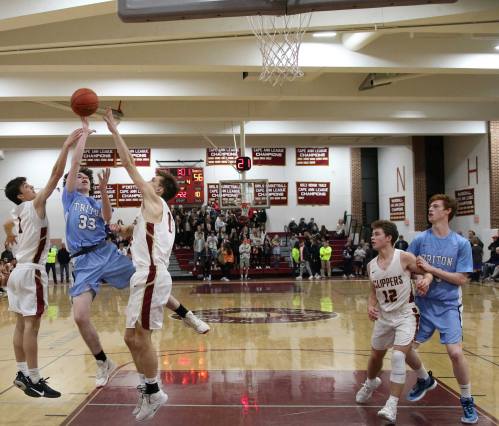 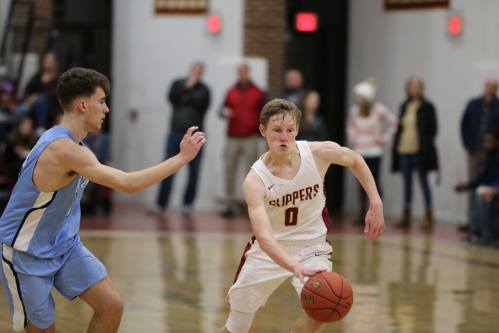 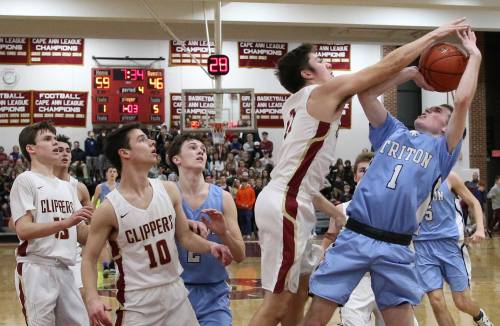 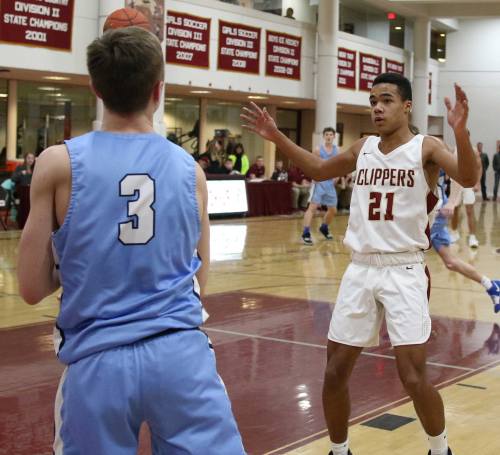 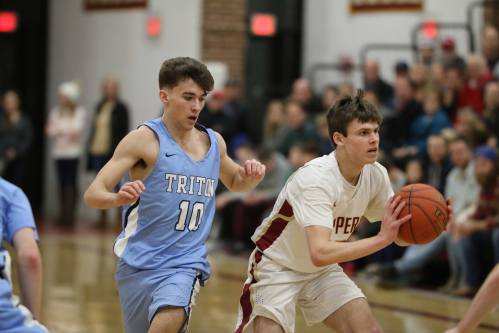 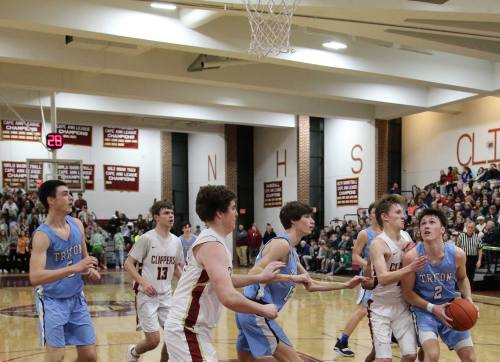 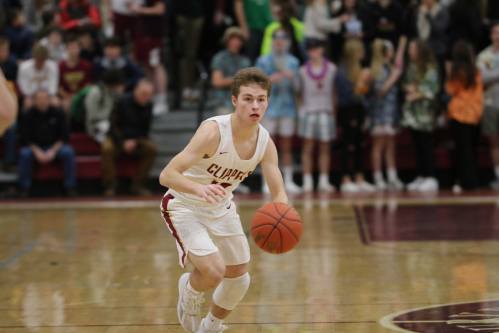 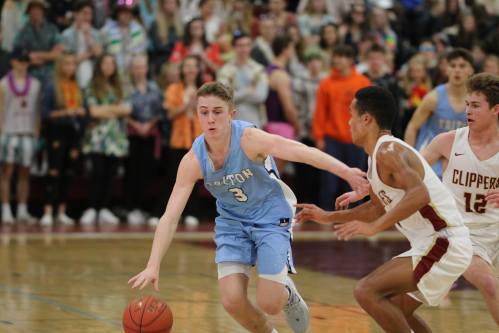 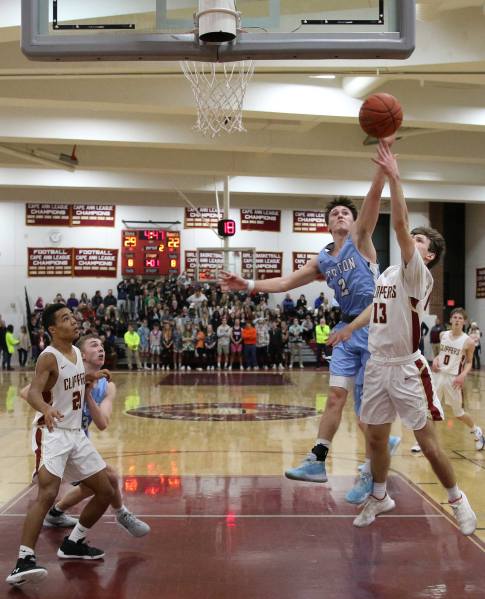