Cathedral controlled the boards and ran for transition layups

Cathedral moves on to the D4 state championship game 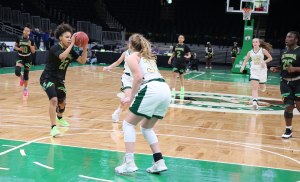 He knew what he was getting into.

“They have size, speed, outside shooting, and depth,” he said post-game.

The Panthers (18-2) showed glimpses of all those positives and took out the Warriors, 61-37, on Tuesday afternoon at the TD Garden.

The Warriors had a sixteen-game win-streak in place and hadn’t lost this year. They played with confidence.

Sophomore Olivia Found’s 3-pointer had Matignon ahead 7-4 after 3+ minutes of the first quarter.

Then Cathedral got its act together and ran off eleven unanswered points in 2 ½ minutes and suddenly had a 15-7 lead.

The team from Cambridge struggled to keep up and couldn’t catch up the rest of the way.

The Panthers had six miscues in the early going which explain their slow start.

“We made it hard for ourselves with our turnovers,” said Cathedral coach Clinton Lassiter. “Despite the turnovers, however, we were used to being here (TD Garden) and we survived.”

It was quickly obvious that Cathedral could run and would run at every opportunity.

During the 11-point run, Cathedral had two inside scores from senior Mackenzie Daleba (18 points), plus fast break layups by Tayla Barros (12 points) and Ariana Vanderhoop (17 points). CeCe Gibson (7 points) finished the run of points with a three from the right side.

Cathedral pushed its lead to twelve (26-14) in the second quarter.

Cathedral’s Tayla Barros ended the first half with a jump shot. That basket was the start of another major Panthers’ run of points. This time it was twelve straight.

When the 12-point run ended, three minutes into the third quarter, the team from Boston was in command, 38-16.

All five Cathedral baskets to start the second half were on fast breaks. The Warriors missed shots and couldn’t get back on defense fast enough to prevent layups down the other end.

“When you’re fresh at the beginning, you can get back,” said Coach DiSarcina. “It’s a big court and we’re not deep.”

“We like to get out and run,” said Coach Lassiter. “We make sure we secure the ball and then we break out. We try to wear the other team down.” 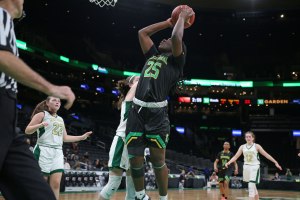 Mackenzie Daleba (18 points) dominated in close at both ends

Cathedral was ready to go starting the second half.

“Anything can happen in the second half,” explained senior Ariana Vanderhoop afterwards. “We knew that they would come back with more energy and we had to push ours up too.”

Matignon did not go quietly. A long-range three from senior Emma Found (12 points) had Matignon within fourteen, 42-28, entering the final quarter.

A stretch followed with three fast-break layups in a span of just over a minute and Cathedral was back up by twenty (50-30) with six minutes remaining.

Benches were cleared over the final minutes which gave everyone in uniform the chance to be on this special court.

Mackenzie Daleba wouldn’t tell me the name of the college she’s committed to. “I will reveal it after the season is over.” The revelation could happen after the championship game.

What’s not to like in Mackenzie’s skills? She can rebound. She turned rebounds into well placed outlet passes. She gets back on defense and can finish.

Mackenzie had one runner in the lane but everything else was from in close. I asked her if she had an outside game: “It’s more of taking what other teams give me. My shooting and my basketball IQ will have to be better at the next level.”

Coach DiSarcina: “Not many people gave us a chance against Fenway (D4 North finals). We’re glad about what we’ve done but if you’re satisfied with where you are then you’re not ready to make the next step.”

Coach Lassiter: “Defense leading to our transition offense is the key to our success.”

Cathedral’s two losses have been to D1 state finalist Franklin and to D3 semi-finalist St. Mary’s.

St. Mary’s plays Rockland tomorrow afternoon to see if they can reach the state championship game again. Hoosac is already in that game. St. Mary’s lost to Hoosac in the title game last year but faced them early in this season and won handily.

Jordan Fergus and Olivia Domingos battle for a rebound

Both Matignon and Cathedral are in the Catholic Central League. I’m not sure how you can be in the same league and NOT play each other during the regular season.

Cathedral has now won fifteen of their last sixteen games. They were 22-2 last season with a state title.

I always enjoy covering tournament games at the Garden. So many memories! 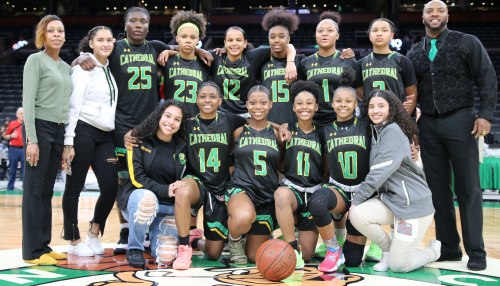 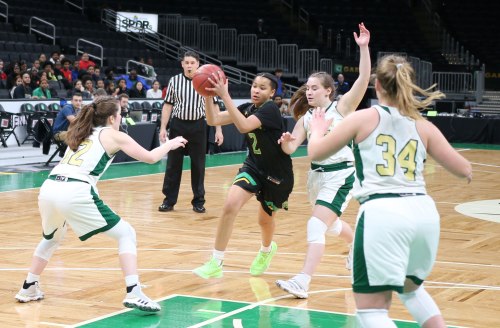 Tayla Barros heads to the basket

Olivia Found (12 points) on a break 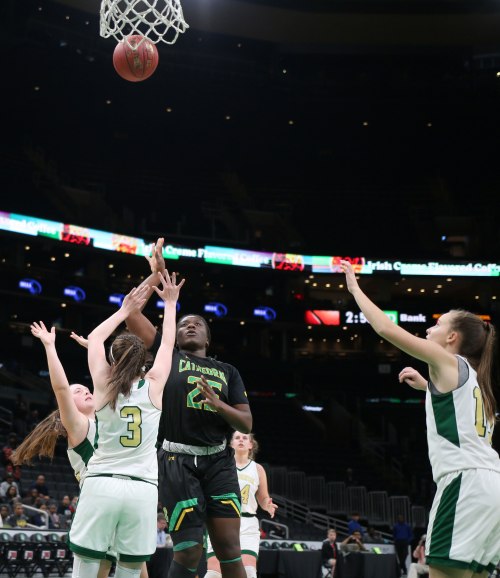 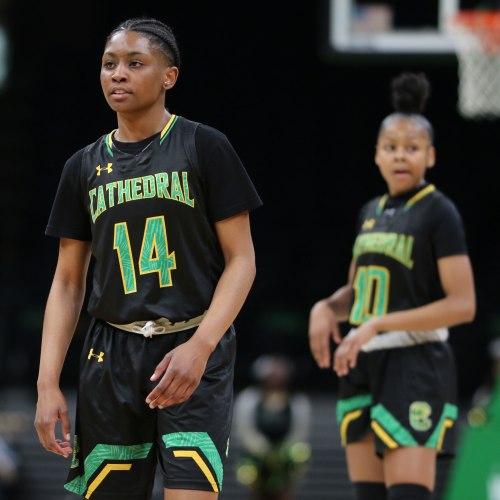 Emma Found (12 points) gets off a shot

Ball on the floor

Ariana Vanderhoop and Erica Hutchinson battle for a rebound