Travis Verrill went from last to first in one week

(Oxford ME) Last week Travis watched the end of the Bandits feature from the bleachers.

This week? An entirely different story.

Travis won his heat and then went on to take the feature on Saturday night at spectator-less Oxford Plains Speedway.

“We had no mechanical failures,” said Travis. “We stayed in front. Clean racing. Good Saturday.”

Jeff Libby was close tonight but still is chasing that elusive first win.

Jeff Libby chased Travis in the heat and the feature. “We’ll get to first someday,” he joked afterwards. Jeff is still looking for his first win.

Travis lined up in the front in the feature with Adam O’Neill. By lap two Adam was fading back and the top four finishers (Travis Verrill, Jeff Libby, Alex Mowatt, and Chad Wills) were in place.

Round and round they went in that order for the final eighteen laps. “It’s hard on these hot days because we have to run these radial tires and it’s hard to keep grip,” added Travis.

So the first four stayed on the bottom of the track waiting for things to change. They didn’t. And there were no cautions leading to restarts.

The order of finish (Travis Verrill, Jeff Libby, Alex Mowatt, Chad Wills) was already in place in the second lap of the feature.

“I just needed that one little shot at it,” lamented Jeff, “but he never opened the door.”

Adam O’Neill got off to an early lead in the feature.

“(Jeff) Libby was all over me though out the whole race but I managed to keep it up in front,” said Travis.

Although Jeff finished second, he loved the race. “It was probably the most fun I’ve had here in three years. The competition was bumper to bumper. If any one of us moved out of the way, someone else was taking that spot immediately. Everyone ran real fair and clean and that’s all you can ask for out of racing.”

Jeff: “We definitely miss the fans, that’s for sure. It’s just not the same.” 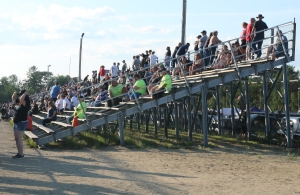 Travis: “It’s frustrating for a lot of the fans because we can only bring ten people in with us. Now we don’t even have pay-per-view coverage which is even more frustrating. I am hoping that in the next couple of weeks they can figure it out with the state and get the fans back in here. Then we can all enjoy it together.”

It was certainly a quick evening at OPS. There were heats and features for four divisions and everything was over in less than two hours. 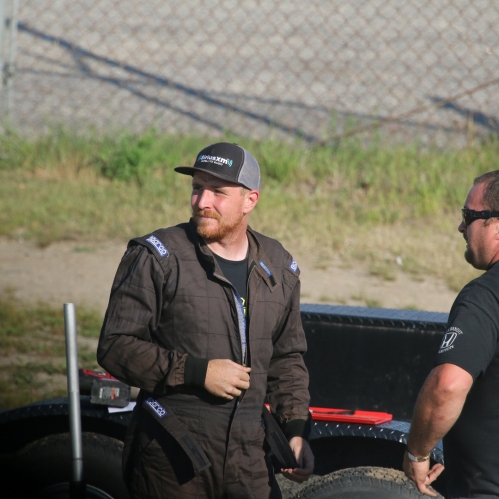 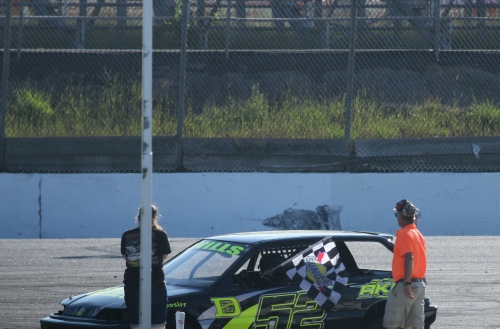