(Oxford ME) Over a year ago in the Bandits Division at Oxford Plains Speedway, Caleb Proctor won his only race of the season while driving the 04.

Tonight, Caleb’s 04 earned another checkered flag.  This time, however, the driver was Chad Wills.

“I’ve really got to thank Caleb,” said Chad post-race.  “I wrecked my car two weeks ago and he let me use his.”.

Chad has gotten a third and now a first in Caleb’s car.  Caleb will probably be the driver the next time the 04 appears at OPS.

There will be nearly two weeks off before the next Bandits race.  “I bought another car yesterday,” explained Chad, “like the hatchback that I wrecked.  Hopefully, in a couple of weeks I’ll be here with it.”

Chad got his first win on July 25th when he took full advantage of a multi-car crash to move into contention.  Tonight, it wasn’t a crash. This time it was leader Eric Parlin slipping away from the bottom of the track near the end of Lap 18.

“Eric got loose in the last lap,” said Chad, “and I happened to be close enough to capitalize on it.”

Chad moved inside of Eric and Jeff Libby followed as Eric tried to recover.  Chris Foster also got to the bottom of the track.

“I could have forced my way back down there,” said Eric Parlin afterwards, “but cars might have been wrecked and I couldn’t do that.”

Eric ended the race settling for a tough fourth behind Chad, Jeff, and Chris. 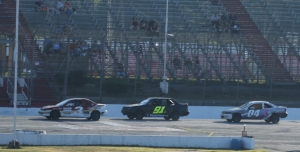 Eric Parlin gets ahead of Brady Heath (91)

At the outset of the 20-lap feature, Eric took the lead from Brady Heath in the second lap.  Chad followed with Alex Mowatt running third.

Alex is not only the points leader but has won two straight weeks.  It was easy to expect him to get the lead sooner or later.  But not tonight.  In fact, his brother Luke, beat him in the second Bandits heat race.

Alex spent most of the evening racing on the upper levels of the track.  “Alex worked hard on the outside, but it heated his tires,” said Chad.  “It was impressive that he could hang out there as long as he did.”

Alex threatened leader Eric Parlin from the outside on several of the later laps.  When Eric slide up from the bottom in Lap 18, Alex got caught behind him and ended up finishing fifth.

Chad realized his good fortune.  “For the second time this year I was in the right spot at the right time.  Sometimes it’s better to be lucky rather than good.”

Jeff was behind Chad Wills when the bottom of the track opened up on Lap 18.  “We followed Chad and that’s how we ended up where we did,” said Jeff.

Luke Mowatt won the second heat defeating his brother Alex in the process.

Eric Parlin’s car threw off plenty of smoke last week.  No sign of any smoke this week.

Eric had a pretty good hold on first until a spinout (Brady Heath) in Lap 11 forced a caution and a restart.  The restart bunched everyone up.

The good weather continues.  This is the 8th week I’ve been at OPS and it’s been nothing but sunshine.

Limited number of spectators on the other side of the track. 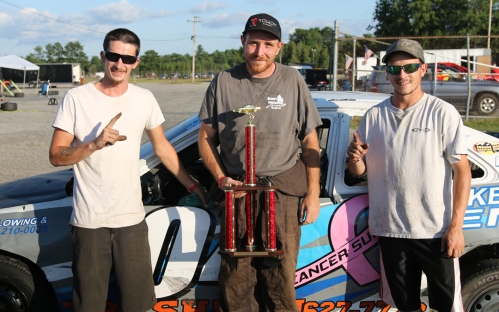 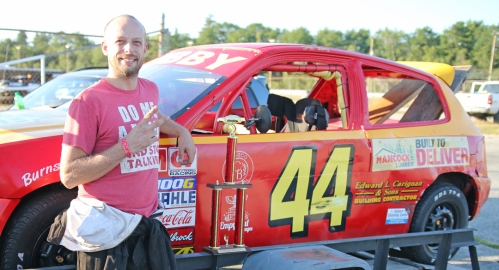 Eric Parlin comfortably in front in the feature

Brady Heath has the early lead in the feature 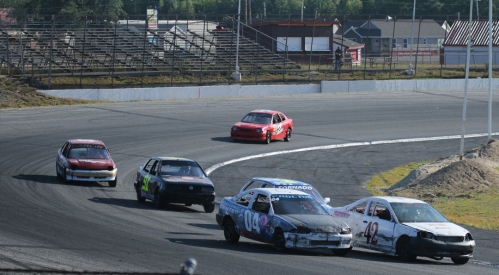 Chad Wills and Josh Lovell in front in Heat 1