Anna Affolter was part of a tight Newburyport defense 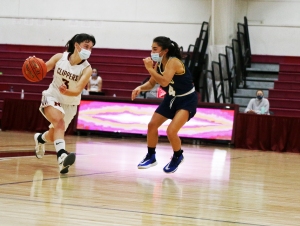 Undefeated Newburyport (4-0) dazzled in every aspect of the game and routed Lynnfield, 61-29, on Wednesday night at NHS.

The Clippers smothered the winless Pioneers (0-3) defensively from the get-go and were about as good on offense as you can get.

“We came out strong,” said NHS high scorer Deidre McElhinney afterwards in what could well have been the understatement of the year!

The Clippers scored the first eleven points of the game and may not have missed a shot during the hot start.

By the end of the first quarter, seven different Clippers had contributed points and NHS was in control, 24-5.

Four of the NHS baskets were on offensive rebound conversions.  Three came on 3-point shots, while another was off a turnover that high scorer Deidre McElhinney (13 points) turned into a layup.

“A lot of us were on tonight,” added Deidre in yet another understatement.

Sophomore Jackie Doucette told me post-game, “I wasn’t really on tonight,” yet she still ended up with eleven points.

Clippers coach Karen Grutchfield was pleased with the way things went: “I thought they did great.  Our whole focus was defensive pressure and out of that pressure we got transition points.”

The Clippers seemed to have the right answers for each defense the Pioneers tried.

Against Ipswich, Newburyport struggled with the visitor’s zone defense.  Not tonight.  Plenty of good passes including cross-court ones that turned up high-percentage looks.  Even on misses, the Clippers size and positioning resulted in nine rebound baskets.

Impressive show, to say the least.

Credit Lynnfield for never giving up despite falling behind by as many as thirty-five (56-21) early in the final quarter.

“They were taller than us and played great,” said Lynnfield coach Jeannine Cavallaro afterwards referencing Newburyport.  “You get down by twenty early, it’s hard to come back.”

Tight Clippers defense on the inside kept two of Lynnfield’s Cape Ann League All-Stars (Caroline Waisnor & Grace Klonsky) on the perimeter and shut down the driving lanes for them.  They were each limited to four points.

“We got some decent looks,” added Coach Cavallaro, “but our offense has been stagnant so far.”

I thought that the individual defense of Anna Affolter and Makenna Ward on Grace Klonsky was excellent.

The early score-separation gave both coaches opportunity to give everyone plenty of playing time.  “We have plenty of depth,” said Coach Grutchfield, “and we don’t lose a lot when we substitute.  Our scoring was spread out (nine players scored) and I like that.”

The Pioneers have certainly gone through some changes since last year’s 13-7 season.  The Morelli sisters graduated.  CAL All-Star Cate MacDonald (averaged 12 rebounds per game) transferred to New Hampton Prep.  Three players are out with injuries. And they have a new coach.

“We’re missing players,” said Coach Cavallaro, “and we’ve been quarantining it.  So we’re behind but that’s no excuse.  You have to come out and play.”

Grace Klonsky is committed to Denison while Caroline Waisnor will join the Endicott Gulls this fall.

The good start by Newburyport bodes well for their schedule ahead.  “If we start the way we did tonight, we’ll be in good shape the rest of the way,” said Deidre McElhinney. 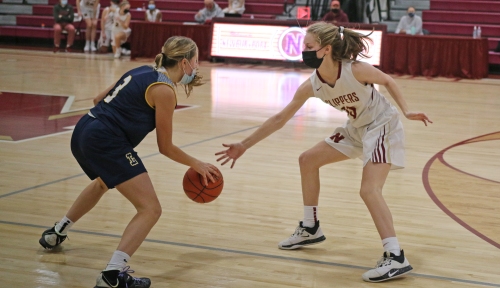 Battle on the boards 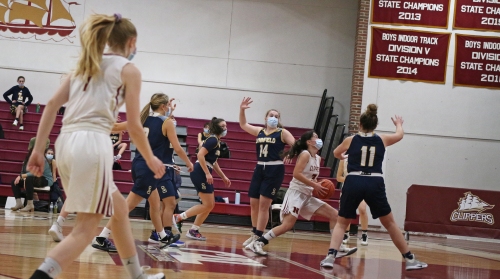 Deidre McElhinney in for two