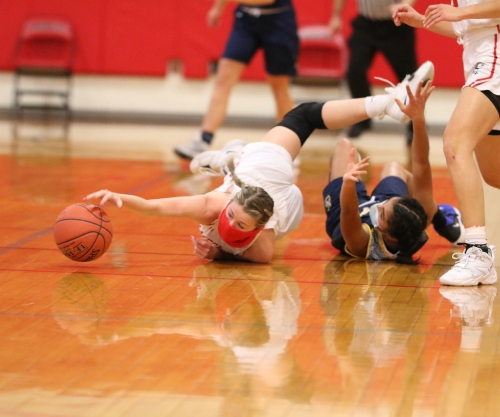 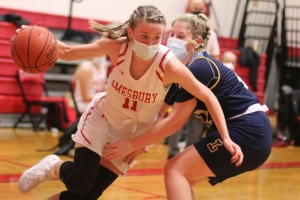 (Amesbury MA) There were six ties and six lead changes.

But it was Amesbury that took the last lead change.

The Indians were able to put together a good collection of offense/defense in the closing quarter and defeated Lynnfield, 47-43, on Friday night.

The winless Pioneers didn’t score a point in the final 6 ½ minutes.

This was only the second game for the Indians (1-1).

“It certainly felt better tonight than last game,” said Avery Hallinan (18 points) about the team’s first win.  “We were more settled and definitely ready for this one.”

“I saw them on film,” said AHS coach Gregg Dollas.  “They were much improved today.”

An issue for the Pioneers was depth.  Injuries had limited them to only seven players in uniform.

The short bench caught up to Lynnfield in the last quarter.

Abby Adamo to the basket

Up until then, the Pioneers made shots and disrupted Amesbury with double-teams and pressure.

“We were better today,” said LHS coach Jeannine Cavallaro post-game.  “We implemented a press the other day and they did a good job of executing it.”

Maybe it was the short Lynnfield bench.  Maybe it was tighter Amesbury defense.  Take your pick and/or add other reasons, but the Pioneers didn’t score another point.

Gabby Redford’s drive, and later her assist on a McKenna Hallinan three, gave the Indians the lead for good, 45-43, with 3 ½ minutes left. 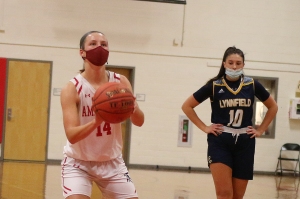 Several minutes later, Alyssa Pettet set up teammate Liv DeLong for a baseline jumper to boost the Amesbury margin to, 47-43, with 1 ½ minutes remaining.

That was how it ended but not before Lynnfield had good looks and Amesbury had free throws.  However, there were no successful connections on either end, and the Indians held on for the victory.

“In the first half we were hitting,” said Coach Cavallaro.  “The second half we were a little tired and I think it affected our shooting.”

Lynnfield’s Caroline Waisnor (17 points) was on fire in the first half notching fourteen points.

Caroline Waisnor (17 points) at the line

Avery Hallinan covered her.  “She’s a very good player and I love playing against her,” said Avery.

Avery had eighteen points with most coming off drives.  Three of the baskets were set up by her sister McKenna.

“We were certainly better on offense today,” said Coach Dollas.  “Every game is going to be a grind.”

“Alyssa Pettet made big plays for us late in the game,” added Coach Dollas.  “She set up a basket and had a steal.”

“Amesbury had size,” said Coach Cavallaro.  “We had trouble shooting against them on the inside.”

Caroline Waisnor beat the clock with a late three to end the third quarter.

“I was certainly happy with our offense tonight after only getting eighteen total points at Newburyport,” said Coach Dollas.  “However, I didn’t like giving up forty-three points although they were really hot early in the game.”

Coach Dollas told me that he had heard multiple answers on whether or not there will be playoffs at the end of the season.

Avery Hallinan: “The Newburyport game was almost like a warmup game because we had so little preparation.  Now we’re moving on.  We did much better today.”

The link to the game story & pictures will be on Twitter @mcclellandpeter.  I send Mascores the stories and some have been posted.  Pictures will appear on Instagram @mcclellandmiscellanea tomorrow.

Grace Klonsky past McKenna Hallinan and in for two