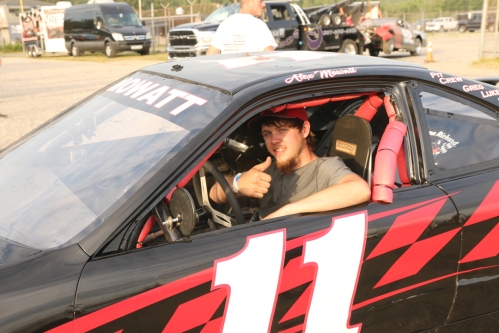 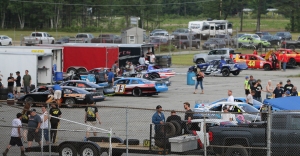 The pits were filled with cars, drivers, and crew members

(Oxford ME) The caution flag has been out for several months.

That ended Saturday as the green flag dropped at Oxford Plains Speedway and this season’s racing began.

No spectators were allowed making for an odd view across the way of an empty grandstand. Hopefully, this will soon change.

I decided last year to concentrate my coverage on one division (Bandits) at OPS and I am doing it again this year. 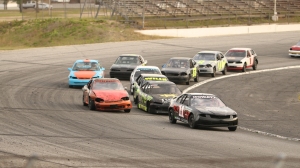 Alex’s win in the first heat earned him the pole position in the feature.

Alex never gave up the front in the feature despite two restarts and clearly had the best car in the Bandits division on this evening.

Even in his heat win, Alex was lengths ahead of the rest of the field when it was over.

In the second heat, Eric Parlin (Oxford ME) appeared to be coasting to a win. However, with less than two laps left, Eric lost control, spun out, and his lead vanished. He ended up 6th. 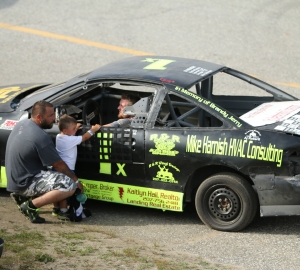 Mike McKinney (Greenwood ME) rallied in a close finish to get third in the feature, despite a car that seemed to be coming apart the longer he drove it. Mike had a fender that hung off for several laps and later a pipe that was bouncing on the asphalt in the final laps. These things, however, didn’t faze Mike. He was going to drive that thing until it stopped!

Comfortable weather and plenty of, “how-you-been’s?,” heard in the stands. 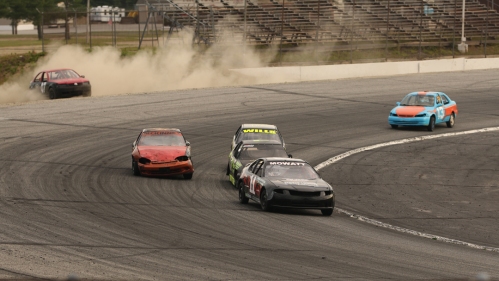 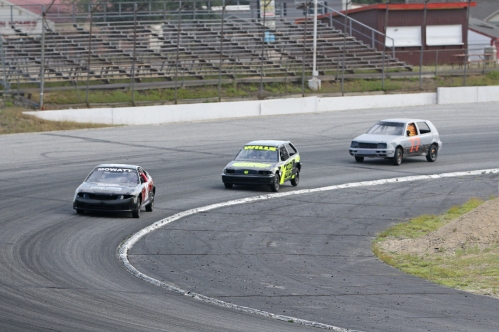 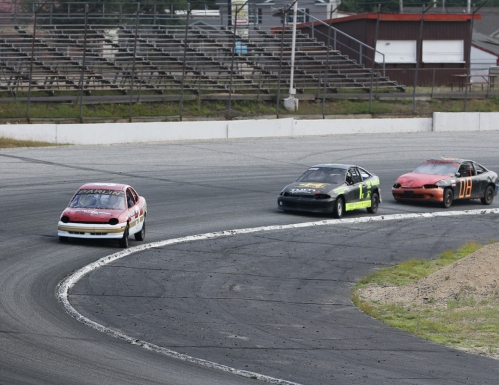 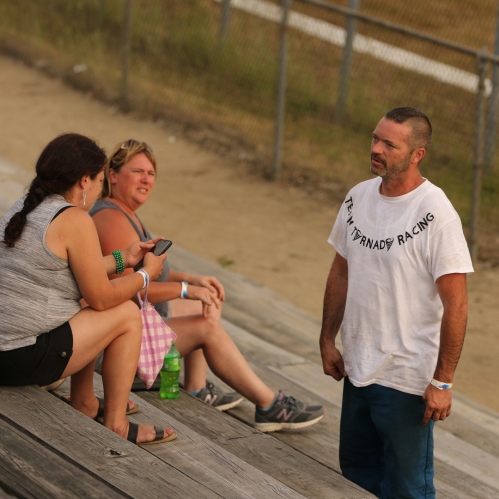 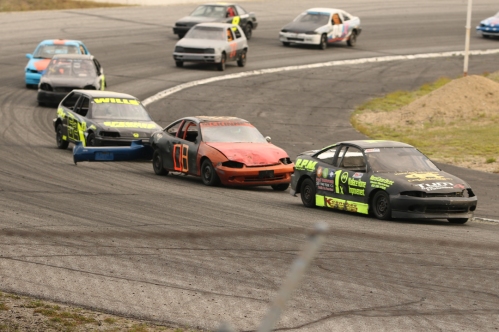 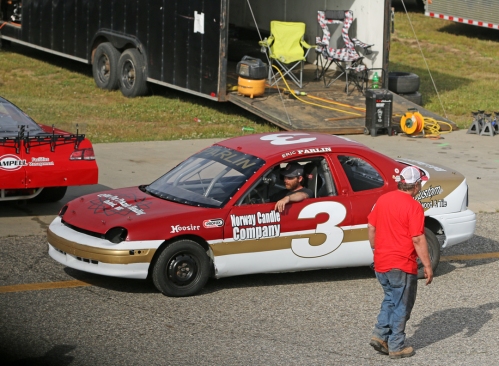 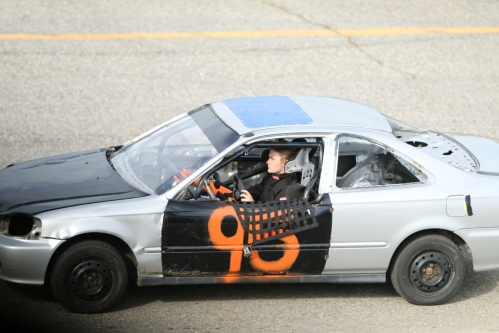 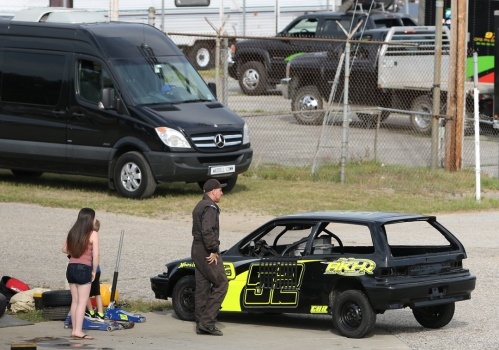 Chad Wills gets ready to race 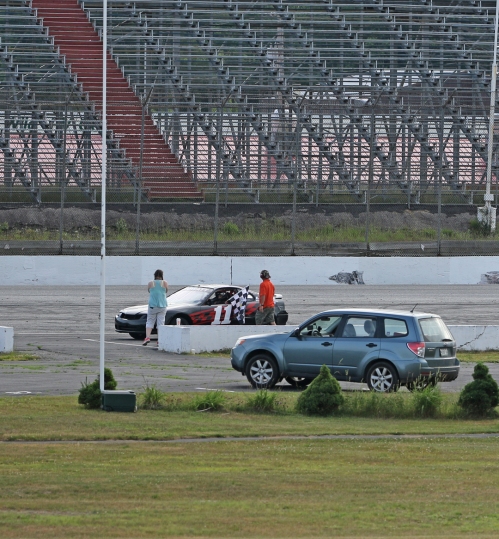 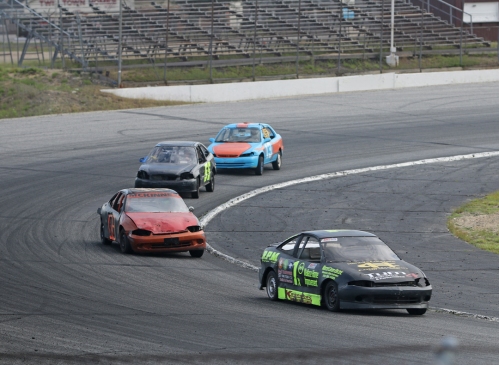 Dustin Salley wins his 6th race of the Bandits season 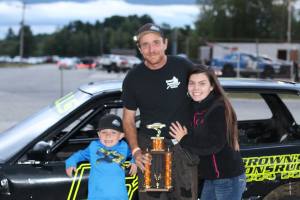 Dustin looked to be on his way to winning his second straight points title but ran into some “technical difficulty”, as Chad described it, after the August 23rd race and was disqualified.

Dustin’s zero points for that race put Chad ahead going into tonight’s final chance for points.

“I knew that I had to stay within five cars of the 18 (Dustin Salley) to win the points title,” explained Chad.

The opportunity to win the championship had an effect on Chad prior to the race: “I was a nervous wreck.  I was quite sick before the race.  It was nerves.”

So while Chad played it safe, Dustin was all in. 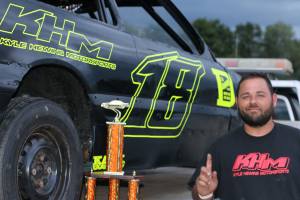 “I drove the wheels off it,” Dustin said.  “Tonight, this thing was hooked up.  Brand new tires are what make a difference with these cars, it’s not going to be all about the motor.”

Grady Doherty had a big night.  He won his heat and came across second in the feature.  Grady’s best previous finish had been a 4th on August 10th.

Dustin won his heat and had already won five times before tonight’s victory.

Grady had the pole in the feature while Dustin started 6th.

Several laps in, the race was between Grady and Dustin.  They were side-by-side briefly and there was contact between the two of them as Dustin took the lead for good. 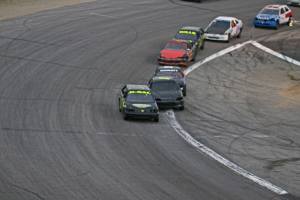 “I tried to keep it as clean as I could,” he explained.  “I didn’t have the preferred groove when I’m out in the second groove, so I kept it tight.”

Once Dustin had the lead, the issue wasn’t who would win but by how much would he win.

“We’ll take the win and move on and see what next year brings us,” added Dustin.

To win the title at Dustin’s expense was bittersweet for Chad: “I owe a lot to Dustin.  He helps me on and off the track.  I thank Kyle Hewins too.  He and Dustin are pretty much the mechanics.  All I’m good for is driving the car.”

Dustin: “We had a great crew; KHM, Chad, Kyle and all of those guys.  They help out a ton.  If it wasn’t for them, I wouldn’t be able to race anymore.  It’s a perfect combination between Kyle and me.  We get these things to go pretty good.  I can’t thank those guys enough.” 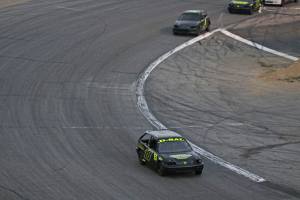 Dustin wins the feature with plenty to spare

I decided this summer to spend some time at Oxford and opted to specialize in one division.  The Bandits became the choice, and in my six visits I met six different winners; Alex Mowatt, Travis Verrill, Jake Hall, Caleb Proctor, Chad Wills, and Dustin Salley.

“We got a DQ last week which cost us the championship,” said Dustin.  “In the whole year it was the only time we were out of the top five so I can’t complain.”

I always find the Rookie division entertaining.  It is almost a certainty that the cars will get tangled up.  Tonight’s tangle eliminated all put two cars and so 12-year-old Maddie Herrick was declared the winner. 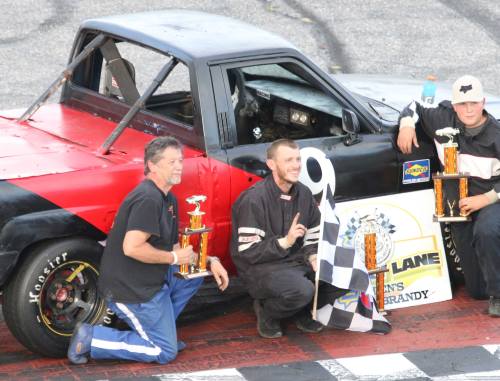 Driver taken to an ambulance after hitting the wall 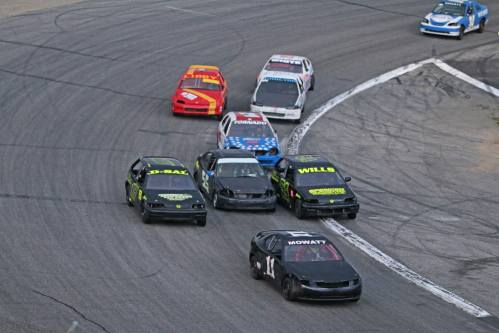 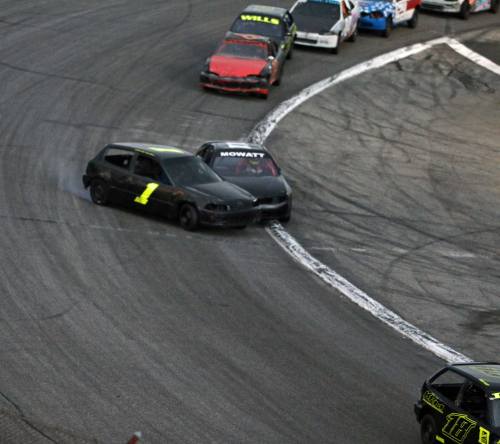 Grady Doherty and Alex Mowatt tangle in the feature 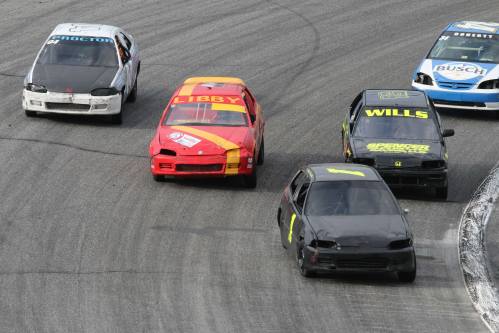