The runners slosh off in the Harrison 5K. Tim Even, in the blue shorts, gets a fast start.

(Harrison ME)  Under downpour conditions, Tim Even won the 11th Annual Harrison Rec Department’s 5K on Wednesday night for the second straight year. 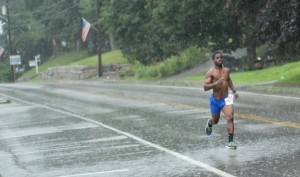 The rainy conditions were a big factor.  If you weren’t carrying an umbrella, or sitting in your vehicle, you were a runner.

It was actually quite dark for the 7PM start but those running this well-managed event (Tammy Anderson and Julie Crawford-Murphy) were more than capable of handling the safety issues that driving rain, darkness, and a flow of traffic might cause.

Tim Even, by way of Fryeburg Academy and Southern Maine, started fast and never trailed, although last year’s 73-second margin of victory was reduced to 13 seconds by Eric Darling.

Tim’s winning time was 17:19, which was over thirty seconds slower than last year.  Blame the rain?  Maybe.  I saw Tim finish 17th in the big Bridgton 4th race a week ago after he took second in 2012.  I’m guessing that there’s some sort of injury in the mix. 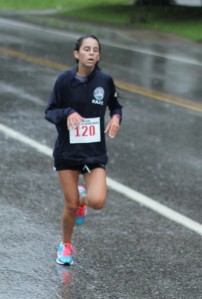 Eric Darling, who won the race in 2011, finished ninth last year on a warm evening.  The native of Shelborne VT shaved over three minutes off of his time in 2012 to get second place this year.

Tim Cushing (Bridgton) ended up 7th followed by Patrick Ridlon (he was 12th in 2012) and 18-year-od Michael Mayles.  Nathan Cushing rounded out the top ten males.

Halee Phelps is 16-years-old and finished 16th overall to capture the female title.  Close behind Halee was Anna Lastra a 15-year-old from Fryeburg Academy.

Erin Seavey of Newburgh (ME) was the third woman finisher. 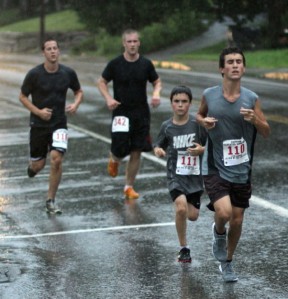 For the second straight year I got a picture of the Laracy brothers, Matt (14) and Mitchell (11), running together down Main Street.

This site has complete race results.

Filed under Harrison 5K Run by the Lake

Tim Even (136) and Sara Bradley (bright green socks) among the starters of the Harrison 5K. 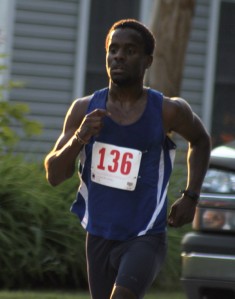 Tim Even wins by over a minute.

(Harrison ME)  No truth to the rumor that Tim Even stopped at the Village Tie Up during the race for a soda before heading back out to win the Harrison 5K on Wednesday night.

Last time I saw Tim run was a week ago when he was chasing Silas Eastman down Main Street in Bridgton‘s Fourth of July race.  I jokingly asked him, before the Harrison race, where Silas was.  He told me that Silas is a friend of his (they are both connected with Fryeburg Academy) and that he would love to race him again.

Tim (recent graduate from Southern Maine) informed me that he had never run the Harrison race before and showed up because he’ll miss a race in Lovell in the near future and needed the workout.

Minus Silas to keep him company, Tim ran alone early and never let up.  I would suspect that his winning time is a course record.

Last year’s overall winner, Eric Darling, finished 9th.  His time of 17:41 in 2011 would have earned him second place in 2012, thirty seconds behind the winner.

The weather was splendid with temperatures in the 70s and plenty of cooling shadows.

Tim Even past Harrison Landing

Filed under Harrison Recreation Department 5K Run by the Lake