Pentucket hangs on to edge Amesbury 54-53 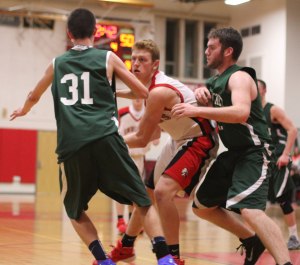 (Amesbury MA) This game came down to the last shot.

The shot hit the rim and bounced away giving Pentucket an exciting 54-53 win at Amesbury on Friday night.

Pentucket (6-6) has now won four of their last five games.

Amesbury (5-6) has squandered a terrific start and now has lost five straight.

The Indians had size advantages at almost every position and worked the inside nicely early on. Dan Welch found open space three times and Riley O’Connor cashed in from long range twice giving the home team a 25-18 advantage 2 ½ minutes into the second quarter.

But over the next eight minutes of playing time things changed entirely. Amesbury had all kinds of trouble scoring while Pentucket, despite six turnovers, tallied fifteen straight points.

That run of consecutive points took the 25-18 Indians lead and transformed it into a 33-28 Sachem advantage 2 ½ minutes into the third quarter. Jimmy Cleary (12 points) notched a 3-pointer and a left-handed hook in the lane during Pentucket’s lengthy run.

The Sachems would elevate their lead to eight (38-30) before Amesbury suddenly found their game and took a 10-2 run to the end of the third quarter tying Pentucket at 40-40. Ryan Foley (15 points) turned a steal into a layin during the Amesbury comeback.

The final quarter was truly back and forth. There were four lead changes in the first 4+ minutes. A three by sophomore Spencer Pacy (13 points) knotted the score at 50-50 at 3:21.

The Sachems ran several nice backdoor plays during the game and none more important than the tie-breaking one late in the game that saw Conor O’Neil send Jimmy Cleary in for a layup. 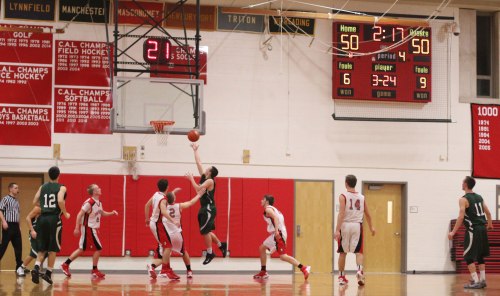 Pentucket added another layup on their next possession when Conor O’Neil (15 points) exploded to the rim for two. I suspect that many of the Amesbury partisans wondered where the help defense was on that play.

Both teams struggled at the foul line

Now down by four points, Amesbury got two points back on a Freddie Halloran layup and another point back on a Dan Welch free throw in the final minute but the Indians needed more. Not on this night.

Plenty of tight defense all night long. Pentucket collapsed all over 6-5 Dan Welch and kept him from turning to the basket most of the game.

Free throw shooting was a nightmare for both teams. Final quarter Amesbury was 2-for-8 and 9-for-19 overall. Pentucket was able to win the game despite making only four-of-eleven freebies and missing along the way the front end of FIVE one-and-one’s.

Ryan Foley paced Amesbury with fifteen points. Three of those points came on a last-second prayer with the shot-clock buzzer sounding in the final quarter.

The surprise to me in the Pentucket scoring was sophomore Spencer Pacy with thirteen points. I saw Pentucket’s opening win over Newburyport and Spencer only played in the second quarter. His three in the final quarter tied the score at 50-50.

Next game for Amesbury is at Newburyport on Tuesday night. Pentucket hosts Ipswich on Monday for their next game.

Race to the basket 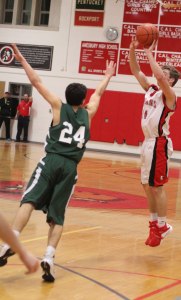 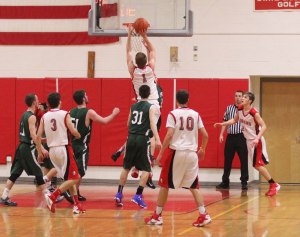 Dan Welch at the rim 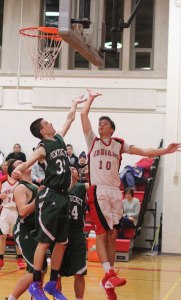 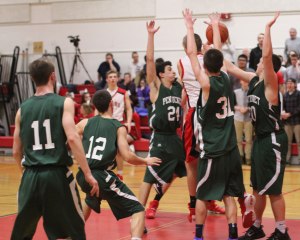 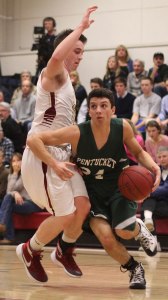 (Newburyport) Trust me, Pentucket didn’t win this one at the free throw line!

The Sachems (1-0) missed twenty of twenty-nine free throws yet still managed to get by Newburyport, 55-52, in overtime on Tuesday night.

This game started the Cape Ann League schedule for both teams.

Newburyport (0-1) looked close to victory in the final quarter after senior Dan Baribeault put five points together in a row to push the Clippers ahead, 44-38, with just under four minutes left. But Pentucket, which had six 3’s in the game, clicked on three of them in the final 2:25 to force overtime.

The Clippers had the final possession is regulation and Dan Baribeault had a good look at the game-winner from the top of the key. On this evening Dan’s shots weren’t falling, he was limited to eight points, and overtime became necessary.

The key to the win? Pentucket’s ability to get to the basket. Granted at times this approach got them to the foul line where they had serious trouble but other times they made layups.

Sophomore Nate McGrail (21 points) had two such layups in overtime and that was enough to get Pentucket the victory.

Nate’s second layup gave the visitors a 53-52 lead with forty-three seconds left. The Clippers had two more possessions to answer back but neither of Quinn Stott’s shots connected. The Sachems responded with two free throws.

Jimmy Cleary totaled thirteen points for the Sachems. He also had an important block on Dan Baribeault late in regulation.

Nick Rogers paced Newburyport with twelve points all on 3’s.

The Newburyport student section went straight for the jugular pre-game chanting, “Where is Pat Friermuth?” The remarkable junior transferred to Brooks after leading Pentucket to the D3 state semifinals last year.

Lots of black and orange on display as a reminder of the passing of long-time Ipswich coach Doug Woodworth. 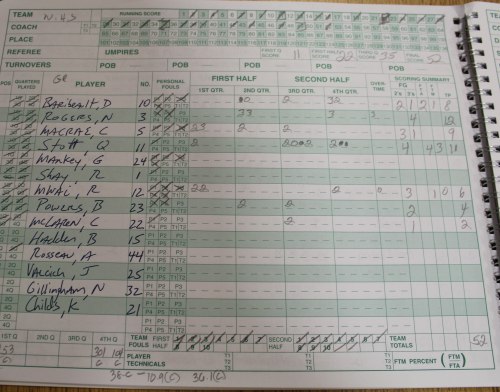 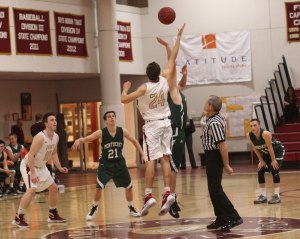 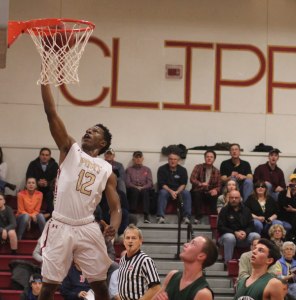 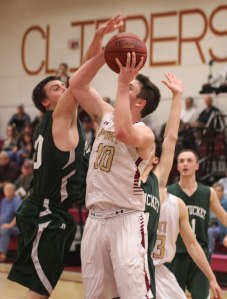 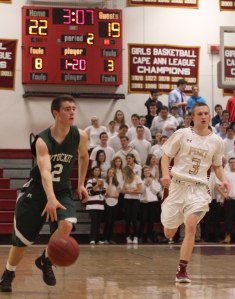 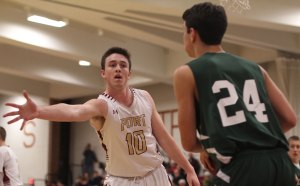