Adam Traxler (5) scores the only goal of the Newburyport/Winthrop tourney game.

Harrison Corbett (11) heads near the goal.

The Clippers (9-7-3), from the Cape Ann League, now advance to the First Round of the MIAA tournament and play #2 seed Lynnfield (15-3) at Jordan Park in Lynnfield at noon tomorrow (Sunday).  The Pioneers defeated Newburyport, 5-2, on October 5th.

Adam Traxler’s 19th goal of the season was all that the Clippers needed to get by the Vikings.

The sophomore’s goal came sixteen minutes into the second half at the end of one of his every-game, speedy rushes down the right side.  On the scoring rush, he passed the Winthrop defender and maneuvered in toward the net, firing a shot that went off Viking goalie Bryan Alzate’s hands into the upper part of the goal.

Winthrop, from the Northeastern Conference, had a glowing opportunity five minutes earlier in the second half when they were awarded a direct kick close to the end line just beyond the penalty area to Clipper goalie Matt Canning’s left.  The shot taken tore across the crease and out the other side untouched as far as I could tell.

NHS goalie Matt Canning clears away a Viking threat in the first half.

The Vikings other shots were long range and NHS goalie Matt Canning was positioned well for each of them when they reached him.

Almost all the other good chances belonged to Newburyport.  In the second half, Spencer Traxler had a good look from the middle and later Jordan Steelman reached the goalie’s doorstep.  Adam Traxler had dangerous shots on net in both halves.

The referee had to straighten out the Newburyport student cheering section in the first half.  Several of them persisted with derogatory remarks about the Winthrop players until he stepped in.  Some of them may have been the same individuals drawing attention to themselves, rather than the American flag, during the playing of the National Anthem.

Spencer Traxler (6) has good look from in close.

Winthrop arrived late and the paper given out with their roster on it had numerous inaccuracies.   Try identifying players in pictures when their numbers aren’t on the roster.

Newburyport had to get three points (2 for a win, 1 for a tie) in their last two games to even make the tournament.

Winthrop took a different route to the tournament.  They played a division 3 opponent (North Shore Tech) in their season opener and defeated the visitors, 3-0, on September 10th.  The Vikings (1-16-2) didn’t win another game in 2011 yet made the tournament because of the Sullivan Rule.  According to that rule, if your record doesn’t get you in then you can get in by at least splitting against the teams you faced that are in the same division you are in during the tournament.  That North Shore Tech game was their only one with a D3 opponent.

(I take my own pictures and collect my own information.  I own any mistakes.)  Click on any of the pictures to enlarge them to normal size.

(Newburyport) Too much of the Traxlers for Ipswich.

The Tigers (2-3) were defeated by Newburyport, 4-2, in boys soccer on Monday night at Newburyport Stadium in Cape Ann League play in the Clippers‘ home opener.

The Traxlers (sophomore Adam & senior Spencer) scored all of the Clipper (1-1-2) goals, including three in the second half.

Ipswich goalie Erik Fyrer watched the action unfold in the first half, and yelled variations of the following to his defense, “Five is their best player.  Contain him.”

Adam Traxler (#5) was indeed a threat in this one every time he was near the ball.  He endangered the Tiger defense numerous times dribbling into open space and let shots fly on net with either foot.  He finally got a shot past Ipswich goalie Erik Fyrer with a spin to the left at 10:48 to give NBPT a 1-0 lead.

The Tigers didn’t have a shot on net for the first twenty-six minutes but responded to Adam’s first goal with one of their own just 1 ½ minutes later.  2010 CAL All-Star Ryan Law dribbled into the middle and then beat NHS goalie Matt Canning to tie the score.

Cole Lewis (#3) about to pull down Matt Jaeger for penalty kick.

Ipswich pulled ahead, 2-1, early in the second half as a Matt Jaeger break in forced defender Cole Lewis to pull him down in the box.  Senior Joe Baraiolo grounded the resulting penalty kick past Matt Canning’s left at 36:40.

Both teams seemed to sense the importance of the next goal and both had glittering chances.  Finally Spencer Traxler put his left foot on a ball that crossed in front and NHS led, 3-2, with seven minutes to go.

That goal seemed to do in Ipswich.  Adam pounced on a bad Ipswich clearout and quickly made it, 4-2, just a minute later to give the Clippers Win #1.

Nice to see the scoreboard used to keep track of the time and the score.  That’s the beauty of playing in a stadium.

(I collect my own information and pictures.  Accuracy is important to me.  Mistakes are unintentional.)

Triton threatens late in the first half.

(Byfield)  They’ve done this before – played to a tie.

The Triton Vikings and Newburyport Clippers played to a 2-2 tie in boys soccer on warm Monday afternoon at Triton in Cape Ann League action.

The teams played twice last year and finished one game scoreless and the other one, 3-3.

This was a rescheduled, weather-impaired game from last week.  It was the actual opener for Triton (0-0-1) and the second for Newburyport (0-0-2).  The Clippers began the season with a 2-2 tie with Methuen.

The conditions were great for spectators but not so for participants – too hot.  The conditioning of both teams appeared suspect and there was plenty of needed substituting on both sides.

The Clippers dominated play early.  They had already played a game and performed like that.  Triton was cautious, more interested in preventing a goal than scoring one.

The officials had the Triton goalie (Dalton Tzitzon – sophomore) change his shirt because he could have been mistaken for a Newburyport player.

Jake Stelline (#10) scored the tying goal for Triton late in the first half.

Persistent sophomore Adam Traxler finally cashed in for the Clippers twenty minutes in.  He broke in alone and finished high to give Newburyport a 1-0 lead.

The Clippers kept after Triton.  Adam came close to a second goal and senior Matt Eagan had a good opening.  Neither cashed in.

Triton finally brought some serious pressure very late in the half, led by senior Jake Stelline.  The Viking senior hit the post on a break in and came back again with a shot off goalie junior Matt Canning’s hands into the upper corner to tie the score.

The halftime rest revitalized the Clippers.  Immediately they were into Viking territory and putting on pressure.  In the first minute there was a sequence with shots and rebounds before senior Harrison Corbett scored.  Newburyport led 2-1. 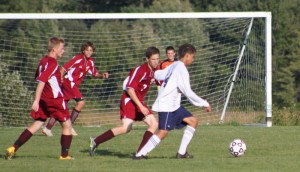 Jake Papanicolaou, shown here dribbling right, later would dribble left into the same area and beat Clipper goalie Matt Canning to the short side to tie the score in the second half.

As in the first half, Newburyport pressed again for more.  Again the dangerous chances came from Adam Traxler.

Triton was a lot earlier to start answering back than in the first half.  Both senior Mark Schwarz and Jake Papanicolaou had threatening shots during the middle twenty minutes of the forty minute half.

It was sophomore Jake Papanicolaou who produced the game-tier with eight minutes left.  The skilled dribbler took control of the ball on the left and maneuvered into the middle before unleashing a left-footed kick that beat Matt Canning on the short side.  That made it 2-2.

I didn’t see any particularly dangerous shots thereafter.  Both teams were clearly gassed.

Newburyport plays at Pentucket on Thursday while Triton gets to visit Amesbury on the same day.

(I collect my own information and take my own pictures.  Any mistakes are unintentional.)

Click on any of the posted photos to enlarge them.

Goalie Matt Canning looks behind him in the first half.

Action in front of the Newburyport end in the second half.