The pictures are sorted by Divisions and boys/girls.

Nick Godzyk (#12) sails in for a layup with thirty seconds left.

Wilmington (13-3) was coming off two straight losses, including the most recent to winless Ipswich.  The Wildcats gave no early indication that could compete with the Knights getting just seven points in the first period on 1-for-16 shooting.

The rest of the way Wilmington shot over 50% (25-for-45), turning up open shots in transition as well as numerous layups after slashes to the basket.

North Andover (14-3) had won the first match (62-58 at Wilmington) between these two and dominated early in front of a terrific high school crowd.  The Knights built a lead of nine (23-14) in the first half and looked to be the better team with their size and early effectiveness close to the basket.

The Knights, however, missed their first eight shots in the second half and Wilmington took advantage pulling in front (32-29) for the first time, since an early 2-0 lead, thanks to five straight points from Vinny Scifo (20 points).

Vinny pushed that lead to six (46-40) early in the last quarter on yet another slash to the basket.  At this point, Wilmington looked to be on its way to a win.

But the Knights came right back and regained the lead with seven straight points (a jumper by Derek Collins and a layup and a three from Zach Karalis).

A layup by Wildcat Tim McCarthy (10 points) and a free throw from Knight Colby Smith tied the score at 48-48 and the stage was set for the final 5 ½ minutes.

A driving layup by Vinny broke the tie and put Wilmington ahead by two and remarkably that lead held up.  North Andover had four possessions in which they could have tied or regained the lead but came up empty missing a number of high percentage shots.

The winning basket turned out to be a jumper in the lane from Tim McCarthy with 1:23 left increasing Wilmington’s lead to, 58-53.  Next two possessions the Knights surrounded a Wilmington 5-second violation with three free throws but Nick Godzyk’s layup with thirty seconds left (pictured above) pushed the lead back to four (60-56).  Isaiah Nelsen air-balled a three and Tim McCarthy added two free throws at the end to finish the scoring.

Zach Karalis (22 points) showed an assortment of shots and a willingness to set up other teammates.  The Knights ran a number of two-player maneuvers but struggled to finish in crunch time.

Vinny Scifo, Tim McCarthy, and Nick Godzyk put on a driving clinic.  Vinny was so good at it that he was never fouled.  Tim did get fouled and was 6-for-6 including two with ten seconds left.

This was a matchup between two of the best teams in Division 2.  Both of them have made the post-season already.  They both looked capable of doing very well in the tournament.

(I collect my own stats, take my own pictures, and draw my own conclusions.  Any mistakes are unintentional.) 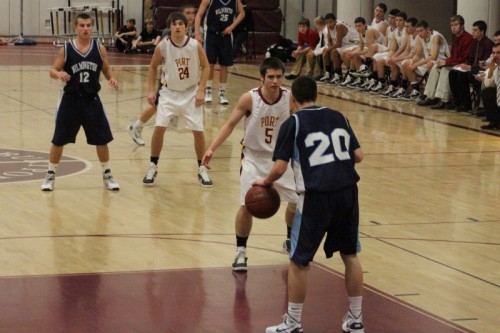 The Wildcats took the lead (18-16) for good late in the first quarter on a Nick Godzyk (13 points) layup.

This was a game of layups and 3’s with very little in between.

The Clippers ran into dry spells in the middle quarters and couldn’t muster the firepower to recover in the final quarter.

Newburyport did put together a 9-1 run late to get to within four (60-56) with forty-six seconds left.  Layups by Eric Meyer, Chris Jayne, and Brett Fontaine plus a Chris Jayne trey provided the points.  However, Vinny Scifo (7 points) and Tim McCarthy (21 points) answered with six straight free throws to clinch the win for the Wildcats.

Tim McCarthy was impressive.  The Wilmington junior guard did not force his offense and set up several teammates for layups.  He nailed four 3’s and was 5-for-5 from the foul line.   He was an important part of the consistent offense Newburyport faced.

I mentioned two runs doing Newburyport in.  The first one was 10-3 in the second period.  Nick Godzyk and James Wilkinson put up the points for the Wildcats.  Nick had a three off the backboard in the mix.  I guess that’s when you know, as an opponent, that you may be in trouble.

Newburyport trailed 30-21 after that run.

I mentioned Wilmington’s consistency.  During the 13-4 run, five different players contributed points.  The Clippers had only twelve turnovers during the game but five of them were during this 13-4 run including three in a row early in the 4th period.

Newburyport faced a solid man-to-man defense the whole game yet with their outside weave and slashes to the basket opened up some good shots.  Wilmington turned up enough open shots to generate the runs that won the game for them.

With 6-5 Eric Meyer inside, the Clippers have the potential of a very effective inside-out game.  The Wildcats were very keen on keeping the ball out of the post and once it got there they sent help.

(I keep track of my own stats.  I offer my own opinions.  I take my own pictures.  I apologize in advance for any statistical errors and misguided conclusions.)