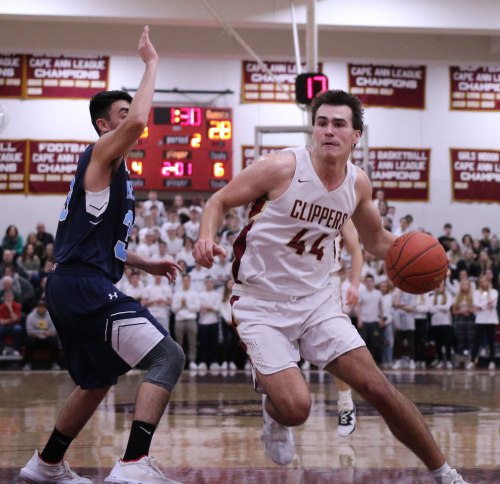 Parker McLaren (23 points) in the lane

(Newburyport MA) “I was getting flashbacks from last year in the first half,” said Newburyport coach Dave Clay afterwards.

And he probably wasn’t the only one.

Dracut, last year, came to Newburyport and stunned the higher seeded Clippers. The Middies would go on to stun a few other teams and win the Division 3 North title.

But that was last year. This time around, the Clippers turned things around offensively and defensively in the second half and defeated Dracut, 67-57, on Monday night in a D3 North First Round game. 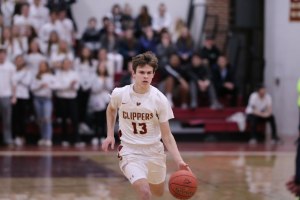 The Clippers (16-5) were in front early, 12-6, and then fell apart defensively. The Middies whacked Newburyport with a 25-point second quarter and were in front, 35-29, at halftime.

“The tone at halftime was that we had to be the tougher team in the second half,” said Jake Robertson.

“We needed more effort defensively,” said Coach Clay. “We needed to help earlier and be tougher with our on-ball defense.”

The Clippers may have been doing those things to start the second half but for four minutes the scoreboard told a different story.

Dracut was up, 45-38, with four minutes to play in the third quarter. The Middies were making tough shots against the taller Clippers.

Was Newburyport on its way to another shocking loss to Dracut?

The #3 seed Clippers overwhelmed Dracut (8-14) on both ends of the court for the next 5 ½ minutes of playing time.

The tightened NHS defense didn’t allow a single point while the offense rolled up an unstopped fourteen straight points.

Parker McLaren and Jake Robertson each had 3’s during the scoring surge. There were also two well-run backdoor cuts that led to layups for Jack Fehlner and Trevor Ward. 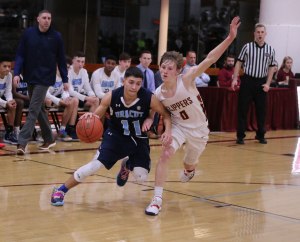 Jack Fehlner did a nice job defending sophomore Adrian Torres. Adrian (10 points) was the one last year who nailed the game-deciding three in the last minute.

“Coach (Clay) told me to stay in front of him,” explained Jack. “He a great player. Very shifty. I just held my ground on defense.”

Adrian had four 3’s last year but none this time around. Jack added ten points tonight including seven in the comebacking third quarter.

The Middies were still within striking range (54-50) with 4 ½ minutes to play. Then junior Jake Robertson took over.

The next nine Newburyport points came from Jake hitting a three, finishing twice at the rim, and making two free throws.

“In the second half, guys did a good job of pushing the ball up the court and I got some easy looks because of it,” explained Jake.

Parker McLaren to the hoop

“He (Jake) came up super clutch in the fourth quarter,” said Parker McLaren. “We were able to get out and run and he was found open on the wing. We know he’s going to knock those down every time.”

“We guarded for the first half,” said Dracut coach Brian Myers. “In the second half we got away from it. That’s been us all year. We haven’t been able to guard a unit for an entire game.”

It certainly helped the Clippers to have Parker McLaren stay out of foul trouble.

“It was a focus of mine going in,” said Parker. “I knew that they were going to attack me and try to get me into foul trouble. As it turned out, I had fouls I could use in the second half.”

“Parker is a physical presence,” said Coach Clay. “He’s huge. They did a good job of collapsing on him and taking away his driving angle. He hit some three’s to stretch out the defense.” 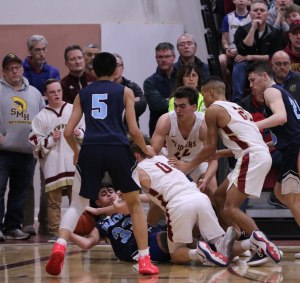 Scramble in the corner

Coach Myers: “Newburyport played with a greater sense of urgency in the 3rd and 4th quarters. They are a good team. They get the right guys the ball. You help a little bit and they make you pay.”

Jake Robertson: “It kind of felt like that Dracut game last year in the first half. We needed to play better help defense.”

Last year against Dracut the Clippers missed fifteen free throws. “We tried as a team to learn from our mistake of missing free throws,” added Coach Clay. “The team spent a lot of time in the off-season practicing pressure free throws.”

Parker was sure that his brother Casey, who was in the crowd, enjoyed the win over Dracut. “They ended his career last year.”

The Middies lost nine of the last eleven games.

The Clippers have now won six of seven games. They play again at home on Wednesday night.

The Middies play in the Merrimack Valley Conference. 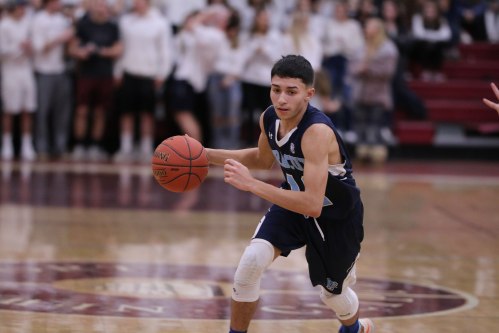 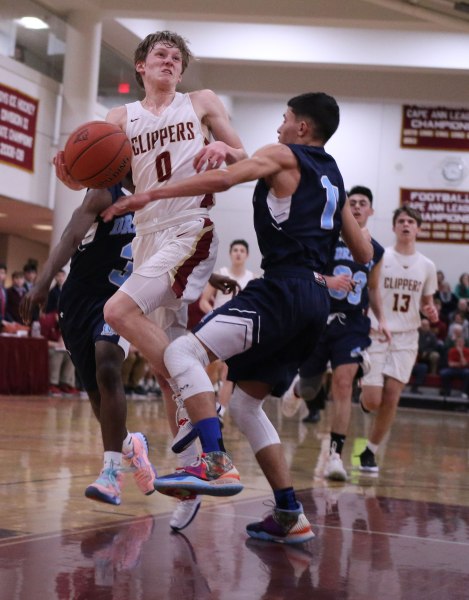 Jack Fehlner tries to get off a shot

Jake Robertson ended the first at the foul line 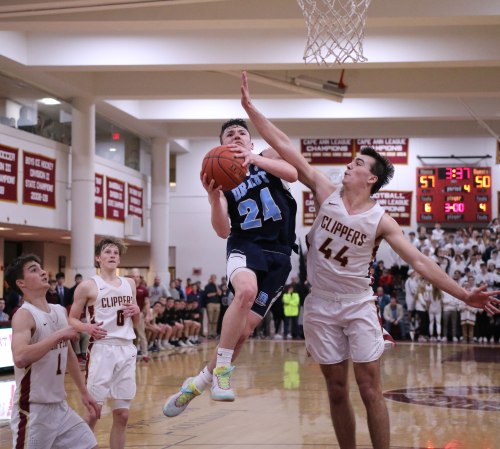 Ronan Brown on the move