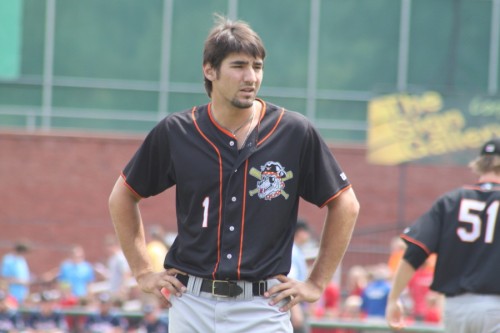 Mascot in hot pursuit of a young fan.

There is nothing quite like minor league baseball in my opinion.  Today was Camp Day at the stadium and of the 6,831 paid more than half were kids from numerous area camps.  And with kids you have to have non-stop activities going on and the Fisher Cats’ staff made sure there were plenty.  Whether it was in the stands or on the field between innings the “kids” show was continuous.

Another attraction to minor league ball is that you get to see young players and, in some cases, prospects.  Some of the prospects are well known while others are hoping to get known.  (I saw Bryce Harper at Portland with Harrisburg last August.)

The prospects I wanted to get for sure in this game were Jay Marisnick of New Hampshire and Nick Castellanos of Erie.

Nick (20) is the Tigers’ top prospect.  Originally a third baseman, the 6-4/210 youngster has been moved to the outfield because Miguel Cabrera is unlikely to vacate 3rd for many years.  Nick’s bat is apparently ready for the majors although he was hitless in this game.  Recently, however,  he was 3-for-4 in the Futures Game including a three-run homer and was the game MVP. 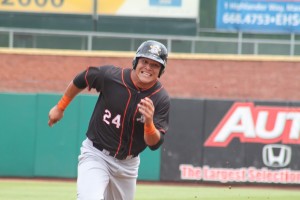 Avisail Garcia heads for third. Avisail was 3-for-4.

Erie’s Avisail Garcia (21) was big versus New Hampshire on this afternoon.  He was 3-for-4, scored two of Erie’s three runs, and drove in one.  Baseball America rates Avisail as the best defensive outfielder in the Tiger system.

The most controversial play of the game was John Tolisano’s home run off the pole in left in the third inning.  The umpires conferred and the homer stood up giving New Hampshire a 2-1 lead at the time.

The best play in the field was a diving catch by Erie second baseman Brandon Douglas hustling into right field.

Another player I wanted a picture of was Roger Clemens’ 25-year-old son Koby.  He is a catcher with the Fisher Cats.  My picture revealed a significant family resemblance.

The Fisher Cats were the Eastern League champs in 2011.  This year they’re at the bottom of the Eastern Division (42-68).  The most painful stat is their 17-35 home record.

I thank NH media relations manager Tom Gauthier for making the arrangements for my visit.  With all the activities going on in the park besides baseball I suspect that Tom’s job is very demanding.