2011 #1 draft pick Gerrit Cole rests in the Altoona bullpen after a pregame workout. 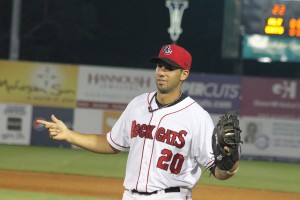 Chris Colabello won the game for New Britain with a 2-out, 3-run homer in the bottom of the ninth.

(New Britain CT)  That Chris Colabello is even playing for AA New Britain is a big story.

Last night, Chris (28-years-old) enhanced that “big story” resume with a 2-out, 3-run homer in the bottom of the ninth inning to give the Rock Cats a thrilling 5-4 win over the Altoona Curve on Friday night.

The victory keeps New Britain ½ game ahead of Reading in the battle for the second playoff spot in the Eastern League Western Division.

Chris (from Milford MA) spent seven years in the Independent Canadian-American League playing for the Worcester Tornado before getting a tryout with Minnesota after being Player-of-the-Year in the Can-Am League.

Chris’ homer (17th) over the right-centerfield fence was off of Altoona reliever Vic Black who hadn’t surrendered a homer all season up to that point.  The fireworks display at New Britain Stadium after the game seemed extremely appropriate.

My love affair with minor league baseball continues.  I found the atmosphere at New Britain Stadium in my first visit to be very  patron-friendly with plenty of food and excitement close at hand.

I enjoy the dispositions of the players at the minor league level.  You can sense their excitement and optimism as they hope to make a favorable impression and move up to the next level.  Most of them are under twenty-five and just plain happy to be where they are.

My goal at minor league games is to get pictures of prospects from either team.  The had-to-get for me was 2011 #1 draft pick pitcher Gerrit Cole of Altoona.  He was not pitching this game but with the help of an autograph seeker I learned which one he was.  I got several shots of him warming up before the game.  I assumed that he would be in the bullpen during the game but he wasn’t since he’s pitching on Sunday.  I ended up with a pretty good closeup of him in the Altoona dugout.

Other prospects I succeeded in getting were: Altoona’s Brock Holt, Kyle McPherson, and Matt Curry and New Britain’s Aaron Hicks, Joe Benson, and Oswaldo Arcia.

Brock is leading the Eastern League in batting.  Aaron was the Twins #1 pick in 2008.  Joe is the Twins second-best prospect according to Baseball America.  Joe saw some action in the majors in 2011.  Oswaldo is a 21-year-old from Venezuela.

My assumption is that the majority of the fans on hand are unaware of the prospects on each team.  However, the ten-fifteen, card-carrying autograph seekers I saw were not in that number.  They knew the newcomers and actively positioned themselves before this game for the chance to get signatures.  The recent release of the 2012 minor league team sets provides a face to match up with a signature.

I learned that New Britain has had minor league baseball since 1983 and were early-on a farm team of the Red Sox. They have been connected with Minnesota for eighteen years and recently signed on for two more years.

In my pre-visit reading I discovered that New Britain outfielder Aaron Hicks’ father (Joe) was drafted by San Diego and played in the minors.  However, Joe was hit by a pitch and his career ended.  The experience soured Aaron’s dad on baseball and he never mentioned his baseball past to his son, in fact, encouraged Aaron to play golf.  Aaron later came upon a bat of his father’s and his passion for baseball began.

Also regarding Aaron Hicks,  I read that the drafting of outfielder Byron Buxton in the first round in the 2012 draft has lit a fire under Aaron since then.  Aaron may be hearing footsteps.  Aaron is already a terrific fielder.  He needs to get his bat going to move on to AAA.

I thank Jeff Dooley (15-year Voice of New Britain Rock Cats) and Pat O’Sullivan for arranging my visit.  I enjoyed it a lot.