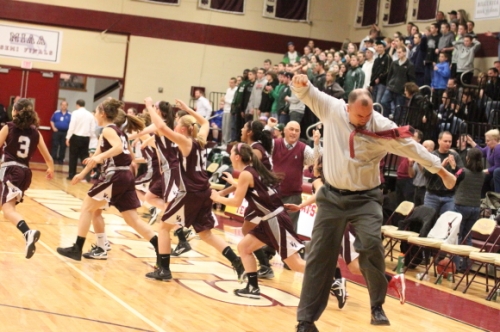 (Haverhill) Two free throws by Meghan Kibblehouse and a steal by Catherine Sennott, all in the last twenty-eight seconds, enabled Westford Academy to hold off Billerica, 53-49, in the North Division 1 semifinals at Whittier Tech on Thursday night.

The Grey Ghosts (20-4) will face Central Catholic at the Tsongas Center on Saturday (6PM) for the D1 North title.

BHS coach Chris Doneski opted to foul right away and that gave Meghan Kibblehouse a chance to get her first two points of the game………and she did.

Billerica had twenty-five seconds to do something about their three-point deficit.  However, when Brittany Lomanno tried to get the ball to teammate Shannon Hayes, Catherine Sennott (15 points) jumped the passing lane and stole the ball.

Catherine was immediately fouled, made the first free throw giving WA a 4-point lead and enough room to withstand three Billerica shots in their last possession. 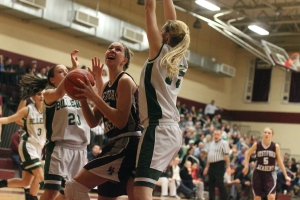 Sam Hyslip (21 points) looks for a shot inside

Junior Sam Hyslip (21 points) led all scorers and was very strong around the basket. She also made 7-of-9 free throws and had the layup in the last quarter that put the Ghosts in front, 50-47, with 1:08 left.

Junior Shannon Hayes (13 points) was key in the 10-point run the Indians put together in the third quarter to take their only lead (37-36) with a minute left in that quarter.  Shannon scored the first six points in the run and teammate Brittany Lomanno (11 points) picked up the other four with a layup and two free throws.

In the rally back from the 48-39 deficit in the 4th quarter, it was Danielle Nickerson (10 points) getting six of the eight unanswered points Billerica collected.  Joslyn King converted a rebound for the other two points. 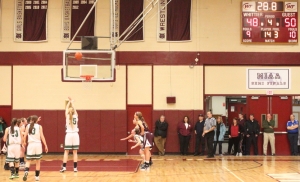 Joslyn King gets Billerica within one point

Joslyn would later make two season-on-the-line free throws with twenty-five seconds left before Meghan Kibblehouse and Catherine Sennott starred in the next two possessions to get WA to the finals.

Despite the tight defense, both teams handled the ball very well.  I had them both for only eight turnovers each.

Hannah Hackley (11 points) was fouled in the first quarter attempting a 3-point shot and made all three free throws.

Westford was able to get inside for easier shots.  However, the athleticism of Billerica allowed them to make some tough outside shots. 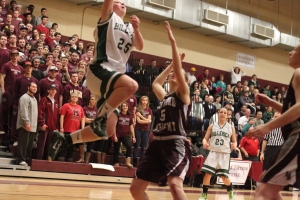 Coach Bob Romeo of Masconomet (lost to Billerica earlier in the tournament) took this one in.  Also saw Coley Viselli of Pentucket on hand after leading the Sachems past Ipswich last night in the Division 3 North semifinals.

Joslyn King looks to the rim

Bailey Mongillo gets set to block