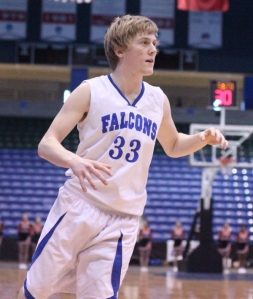 Reserve Jake Cawlina (9 points) saved the day for the Falcons

(Lowell) If you saw last year’s game between Danvers and Wayland you knew what to expect….end of the game excitement.

The Falcons (22-2) broke free from a tie game in the last minute and defeated the Warriors, 57-52, to win the Division 3 North title at the Tsongas Arena on Saturday afternoon.

Danvers will face Martha’s Vineyard (17-5) in the state D3 semifinal game at the TD Bank Garden on Tuesday.  The finals are at the Worcester Centrum on Saturday.

Last time against Wayland, a 3-point shot by reserve Mike Scarfo was part of a 10-point rally that forced overtime in the Falcon’s 70-67 win.  Today it was seldom-used, senior Jake Cawlina who saved the day for Danvers.

With Dan Connors in game-long foul trouble and Vinny Clifford not as accurate as he has been recently, DHS coach John Walsh gave Jake a chance.  Nine points later Jake made the coach look like a genius.

Jake entered the game in the second quarter and nailed two 3’s as part of a ten-point run that gave Danvers its largest lead of the half, 31-20, with a minute left until halftime. 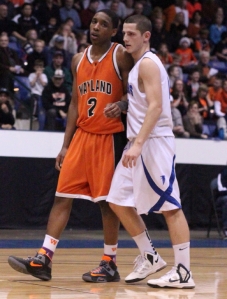 The Falcon advantage would grow to 35-23 two minutes into the second half but the never-say-die Warriors erased their entire deficit and had Danvers in a 52-52 tie with 1:41 left.

The Falcons extended their next possession with an offensive rebound and Jake Cawlina then hit his third 3-pointer of the game to give the Falcons a 3-point lead (55-52) with fifty-five seconds left.

But Jake was not done contributing.  On Wayland’s next possession, he and reserve Kieran Beck got Yannick Schaefer in a trap and Kieran stole the ball.

Danvers ran clock before Eric Martin fed Nick Bates cutting down the lane for the layup that sealed the deal (57-52) for the Falcons with thirteen seconds left.

Certainly a key to the Danvers win was limiting Jaleel Bell to seventeen points on 8-for-15 shooting.  Eric Martin was the primary defender.

Eric Martin had nine points and five assists plus the great defense on Jaleel Bell.

Dan Connors tallied only four points as fouls kept him on the bench more than on the floor.  He had three fouls in the first quarter and sat out the second quarter.  Thirty seconds into the third quarter he had his 4th and was benched.  Four minutes into the final quarter he was done for the game.  Dan’s inside scoring/rebounding were sorely missed.

Harry Leavitt (9 points) drove in for the layup that tied the score at 52-52.

Harry was part of 10-point run by the Warriors (19-5) in the third quarter.  He had a layup and two free throws.  Jaleel Bell, who had eleven points in the third quarter, added two layups and Greg Karpacz also had a layup.  That collection of unanswered points put Wayland within two (35-33) with four minutes left.

Eric Martin was part of quick five points in the first quarter.  He assisted on Nick McKenna’s three and then stole the inbounds pass and tallied a layup.

looking for a rebound

Wayland coach Dennis Doherty is probably wondering what this game would have looked like at the end if his team hadn’t missed eleven-of-fifteen free throws including three that were the front ends of one-and-one’s.

Danvers wasn’t too much better from the line.  They missed six-of-nine attempts including one front end of a one-and-one.

The Falcons have eliminated Wayland from the tournament three straight years.

All eyes on a Vinny Clifford three