Joey Bertrand congratulated after the game

Dan Bennett strikes out to end the game

(Ipswich MA)  Saugus ran its winning streak to six as they defeated Ipswich, 7-5, on a windy Tuesday afternoon of Cape Ann League baseball.

Ipswich (2-9) has now lost six straight and maybe none tougher than this one.  IHS coach Gardy O’Flynn wasn’t feeling well before the game and I suspect that this excruciating loss did nothing to improve his condition.

The infield play of both teams was very shaky.  Of the twelve runs scored only three were earned.

Mike Swanson heads for home with the seventh Sachems run

Saugus senior Joey Bertrand was the difference maker in this game.  His two-out, two-strike double scored pinchrunner Mike Swanson and gave the Sachems a two-run cushion in the top of the seventh inning.  In the bottom half, Ipswich put their first two runners on but Joey came up with an assist and two strikeouts to finish off the Tigers.

Both Kurt Martin and Anthony Freni pitched before Joey Bertrand closed out the final 2 2/3 innings.

In a game with eight infield errors, one terrific defensive play by Sachems first baseman Mike Molina stood out.  Why?  Ipswich had already scored a run in the sixth inning and only trailed 6-5 with a runner in scoring position.  Saugus third baseman Alex Pettanati fielded Alex Rubino’s two-out grounder cleanly but his throw was low.  However, Mike Molina scooped the ball out of the dirt preventing the tying run from coming across.

Ipswich had baserunners galore thanks to four Saugus errors, seven walks, and six hits.  The Tigers did get five runs but they stranded runners in every inning.

Luke Sirois (#4) caught in a rundown by catcher Johnny Prentice

The biggest play in this game may have been in the fourth inning when Ipswich, with one run already in, loaded the bases with one out.  You had to assume that Chris Grady’s fly ball to centerfield would score Luke Sirois from third…….but instead it turned into a double play.  Luke was late tagging up and then was tagged out in a rundown.  Ouch!

The Tigers scored in the first when Dan Bennett was hit by a pitch, took second on a wild pitch, and third on a fielder’s choice.  Freddy Cerendolo’s sharp single to left brought Dan home.

The Sachems (8-5) picked up a run after singles by Pat Murray and Joey Bertrand in the second inning set up Alex Pettanati for a sacrifice fly.

The Tigers defense allowed two Saugus runs in the third inning.  A Ryan Silva strikeout escaped catcher Jay Galoski allowing the batter to reach first and a run to score.  Chris Grady also had an error at third in this inning. 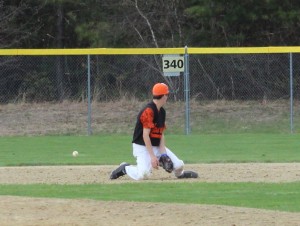 Two more Ipswich miscues led to three unearned runs in the fourth inning.  First shortstop Mike Savoie and then second baseman Liam Sullivan booted what would have been the final out of the inning.

An Alex Pettanati error set up the Ipswich run in the fourth.  That also was the inning an Ipswich run could have scored from third on a fly ball but didn’t.

After Dan Bennett singled and reached second on a fielder’s choice, Jay Lever’s low throw to first on Freddy Cerendolo’s grounder allowed Dan to cross with the fifth Ipswich score.

But 6-5 was as close as Ipswich would get.  Joey Bertrand’s RBI in the seventh iced it for the visitors.

Weather?  Sometimes the sun was out and sometimes it wasn’t.  The wind was steady and chilling when the sun went in.

Austin Rubino (#14) looks to be in trouble 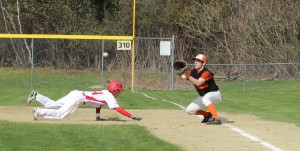 Johnny Prentice gets picked off first 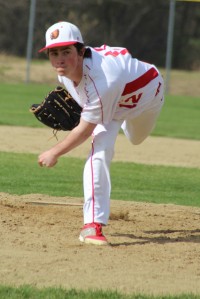 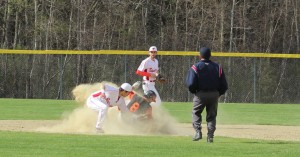