(Lynn MA) The third time was the charm for the Lincoln-Sudbury girls’ soccer team.

After being knocked out of the Division 1 North tournament two straight years by Central Catholic, the Warriors found revenge with an exciting, 1-0, win on a tropical (for November) Tuesday afternoon.

The victory on Veterans Day puts LS in the D1 North finals on Saturday afternoon (4:15 PM) versus Chelmsford.

Chelmsford may have done Lincoln-Sudbury a huge favor by defeating #1 seed Acton-Boxboro in today’s other D1 North semifinal.  Why?  LS played AB twice in the Dual County League and lost both times.

Senior Hannah Rosenblatt dribbled through traffic from her left and found teammate Jenna Barnes in the middle.  Jenna side-stepped one defender for a clean look beating CC goalie Amanda Fay to Amanda’s right.

I asked Jenna about the goal afterwards.  She confessed/laughed that the shot was a “toe ball but that she’d still take it.”

This is the picture sequence of the LS goal:

That that one goal held up was a surprise to me because both teams were skilled and fast.

Central Catholic (11-5-4) was led on the attack by freshman Elayna Grillakis.  Elayna had the speed to really pressure the LS defense.  “Our defense was terrific in recovery,” said LS goalie Caroline Fahey afterwards.

The best of the CC chances was in the first half with about six minutes left.  Elayna broke down the left sidestepping both Jenna King and Emma Garrett to get in on Caroline Fahey.  Caroline slid into a block and deflected the ball away from Elayna at the last second.

Here is the picture sequence of Elayna’s break in: 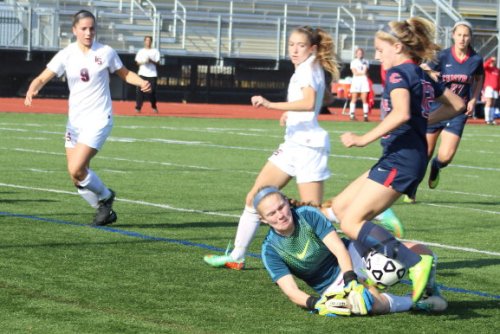 The Raiders Jenna Martin had several collisions with the LS goalie chasing balls lobbed into the box but couldn’t put on a finishing touch.

Central Catholic had an incredible number of throw-ins because of the pressure they put on the outside lanes.

Hannah Rosenblatt drilled a long direct kick but it was right at CC goalie Amanda Fay in the second half.

Who ever heard of November weather in the upper 60’s?  Next week only six states are supposed to avoid snowfall!

One of the referees arrived late.

Lincoln-Sudbury has qualified for the post-season in 15 of the last 16 seasons.

(This is a blog so if any of the information is incorrect, please let me know.)

Izzy Ross (2) well set up in the second half 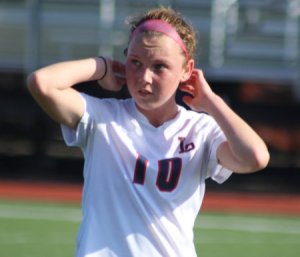 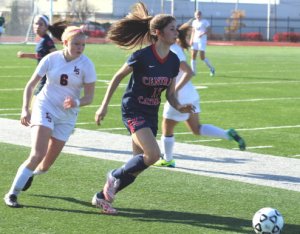 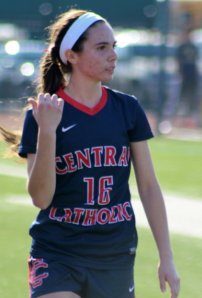