(Ipswich MA) Newburyport trailed by eleven early in the second quarter but came all the way back to defeat Ipswich, 61-58, in Cape Ann League action on Friday night.

The Clippers (4-5) took the lead for good at the end of the third period (40-39) as Liam Hundertmark converted his own miss.

Quite a shooting display put on by Dan Baribeault (Newburyport) and Jake Long (Ipswich).  Both players finished with twenty-four points.

Dan was able to create space for shots for himself whenever he wanted to.  Jake was a long-range specialist hitting six from beyond the arc including three in the final quarter. 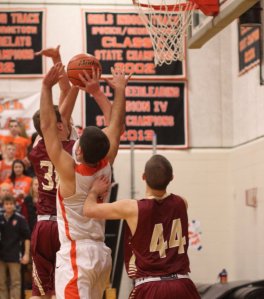 The Tigers (2-6) were uptempo from start to finish.  That uptempo style and a persistent IHS student section seemed to fluster Newburyport in the early going.  The Clippers committed seven turnovers in the first quarter and had several air balls.

Jake Long’s first 3-pointer was part of eight straight IHS points that put them in front, 8-4, in the first three minutes.  Later in the quarter, and stretching into the start of the second quarter, the home team put seven points in a row.  Kyle Silva drained three straight free throws to key that run that put Ipswich in front, 21-10.

Thereafter Newburyport became more patient on offense and did a better job of protecting around the basket.  Open shots began to be found by NHS.  When Quinn Stott opened the 3rd quarter with a three the Clippers were within one (27-26).

Newburyport caught IHS at the end of the third quarter (40-39) and started the final quarter with consecutive hoops by Jake Berger and Liam Hundertmark (12 points) with an assist from Matt Short.  Now down five points, the Tigers answered with baskets but on this night couldn’t get the stops they needed. 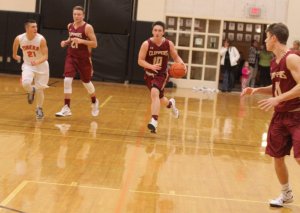 The Clippers kept the ball in Dan Baribeault’s hands in the end game which limited turnovers.  Dan made five-of-six free throw attempts in the last 3 1/2 minutes.

The two teams had met earlier in the season with Newburyport earning a , 52-47, victory.

Both teams pressed but there were few mistakes in the backcourt.  Half-court was a different story, however.  The Clippers ended up with twenty turnovers while Ipswich had eighteen.

The Tigers were assessed an intentional foul late in the game.

Newburyport had lost two in a row before tonight’s win.  Their next game is at home on Tuesday versus Manchester-Essex.

The Tigers have now dropped five straight.  Next for them will be an away game at Triton on Monday night.

I was impressed with the Ipswich student section.  They were loud, persistent, and kept it clean.  The IHS student section appeared to have the attention of the Newburyport players in the first half when the Clippers shot at their end.

Liam Hundertmark (12 points) gets off a shot 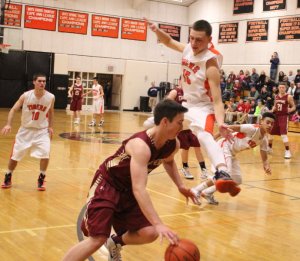