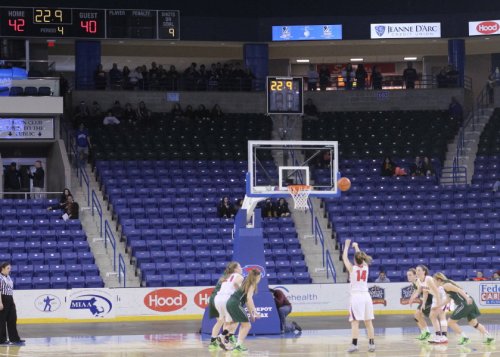 Michaela Antonellis (15 points) had a strong game for Watertown

Not the ingredients you’d expect to be part of a Watertown girls’ win but they were.  The Raiders had enough defense to offset the negatives and ousted Pentucket, 44-40, to gain the Division 2 North title on Saturday afternoon at the Tsongas Center.

Watertown will face South #1 seed Duxbury (24-1) on Tuesday night (5:45PM) at the TD North Garden in the Division 2 state semifinals.

Kelsi McNamara (23 points) was option one, two, three, and four for the Sachems (23-2) all afternoon.  Kelsi, who recently became Pentucket’s all-time scoring leader, saw plenty of defenders Rachel Morris and Felicia Korte during the afternoon.  The taller twosome alternated on Kelsi and did a solid job of limiting open 3-point attempts.

When Kelsi was able to find space past her outside defenders there was always 6-2 Shannon Murphy to also be dealt with.  Almost all of Kelsi’s open shots were taken in warmups!

Kelsi, however, had two of four 3’s during the first half of the final quarter.  Her second one put the Sachems within one possession (41-38) of the lead with half a quarter left.

The undefeated Raiders (21-0) made things more “interesting” than they should have as they nursed a three-point lead with a run thereafter of turnovers (three) and missed free throws (four).  But the team from West Newbury didn’t answer the Watertown miscues with points.  In fact, it wasn’t until twenty-four seconds were left when senior Audrey Tipson sank two free throws to put Pentucket on the doorstep trailing only 41-40.

Looking for a clutch performance?  Step up, Gianna Coppola.  The Sachems fouled Gianna to stop the clock after Audrey‘s free throws.  The WHS senior made the first shot but not the second.  The rebound on the missed shot, however, was mishandled by Pentucket and Watertown had the ball out-of-bounds.  A pass in and Gianna was fouled again.  This time she hit both free throws giving Watertown a four-point lead with nine seconds left.  A prayer by Kelsi McNamara a few seconds later was not answered and the Raiders had the title.

Watertown started fast (11-3) with Michaela Antonellis (15 points) cashing several inside shots.  The Sachems, however, shut out Watertown for the final five minutes of the quarter and went on a 12-1 run to lead 15-12 after a quarter.  Kelsi had two three’s in that segment.

The Raiders regained the lead but Pentucket was still close (27-25) in the first two minutes of the third quarter.  A layup by Audrey Tipson assisted by Boo Torrisi narrowed the gap to two.

Then junior Michaela Antonellis took over with eight consecutive points on a three, a jump shot, and a driving layup.  Gianna Coppola followed with a layup assisted by Michaela to end a nine-point run that put Watertown ahead 36-25 with 3:10 remaining in the third quarter.

Kelsi McNamara tries to get past 6-2 Shannon Murphy

After Shannon Murphy notched a layup to start the final quarter Watertown looked comfortable at 41-32.  But two Kelsi McNamara three’s later that lead was down to three with plenty of time left.  On this afternoon that “plenty of time” wasn’t enough for the Sachems.  No question they had plenty of glittering chances but couldn’t find a big shot in the end game.

I was impressed with ball-handling skills of Watertown’s Michaela Antonellis.
I was also impressed with the way Pentucket turned up the defense in the final quarter.  The way they double-teamed every Raider receiving a pass was effective.

This was the third straight year to the North finals for Watertown.  Two years ago Pentucket won, 38-24, as they put fifteen straight points together to get an early 18-2 lead and never looked back.
(All of the pictures above and below will enlarge considerably if you click on them.) 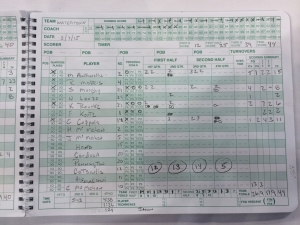 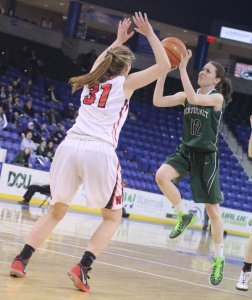 Kelsi McNamara puts up a runner in the lane 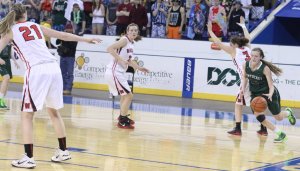 Kelsi McNamara was heavily defended on the perimeter

Kelsi McNamara gets a block on Gianna Coppola 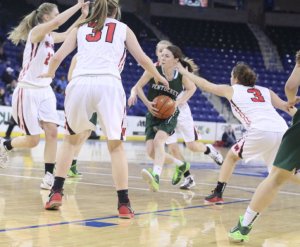 Kelsi McNamara in the midst of four Raiders