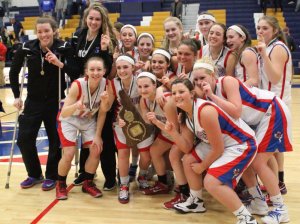 (Manchester NH) No need for any last-minute heroics by Londonderry in this one.

The #2 seed Lancers started fast and never trailed as they defeated Winnacunnet, 48-33, to take a second straight Division 1 title.

The Friday night encounter at the SNHU Fieldhouse lacked the end-game tension of a year ago when Londonderry rode a late three by Brittany Roche (assisted by Jackie Luckhardt) to an exciting 57-56 victory over Bedford.

#9 Winnacunnet reached the finals by getting the ball inside to Meg Knollmeyer (nearly 20 points per game) and getting to the foul line (83 free throws to opponents‘ 44 free throws).

In the title game the Lancers (20-2) collapsed around Meg and wouldn’t let the talented junior or her teammates get to the rim very often.  The Warriors (14-8) had only eight free throws while Meg Knollmeyer was held to eleven points.  Tara Burke and Noelle Lambert were big in denying passes to the interior.

There were turnovers a-plenty in this game.  The number of passes to no one in particular astounded me.  It is important to note that some turnovers are more costly than others.  The first quarter is a prime example.  Londonderry got off to a great 8-0 start.  All eight points came off of Winnacunnet miscues.  That’s costly!

The Warriors played their best minutes of the game after getting down by eight. They got inside (3 layups) and closed to within two (10-8) after a quarter.  Meg Knollmeyer had two of the layups.

The team from Hampton was still within two (15-13) three minutes into the second quarter after a 3-pointer by Molly Britton.  But then the wheels came off for Winnacunnet as the Lancers ran nine unanswered points over the next three minutes to break away, 24-13.  Jackie Luckhardt had a 3-pointer, a rebound, and an assist in the separating segment.

Winnacunnet moved to within two possessions (30-24) on Emily Britton’s 3-pointer with 2 ½ minutes to go in the third quarter.  But the rest of the quarter was all Londonderry with a jumper by Brittany Roche and a long one by Kelsey Coffey.  That ending restored the Lancers’ eleven point lead (35-24). 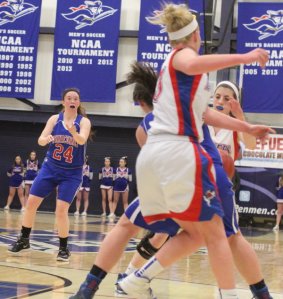 The Warriors go inside a double-digit deficit briefly in the final quarter on Molly Britton’s second three-pointer and later a layup by Meg Knollmeyer.  However, two straight layups by Tara Burke restored the Lancers’ double-digit spread and they played keep-away on offense the rest of the way.

Junior Jackie Luckhardt had nine turnovers for Londonderry but the rest of her stat line had plenty to do with Londonderry winning the championship.  Jackie had eleven rebounds, seven points, nine assists, and six steals.

I saw at least two inbounds layups by Noelle Lambert assisted by Jackie.

This game was long on contact.  Meg Knollmeyer was staggered by a Kelsey Coffey screen in the second half.  Brittany Roche needed help from the trainer after she went down hard.

Winnacunnet scored just one layup in the second half.

Londonderry defeated Winnacunnet, 58-47, during the regular season.  Molly Britton had six 3-pointers for the Warriors while Meg Knollmeyer tallied seventeen points to go with eleven rebounds.  Key to the title win was significantly lessening the production of Molly and Meg in the second meeting.

Greatly appreciated getting a full set of stats from the SNHU stat crew.

Kelsey Coffey takes time off the clock in the 4th quarter

Winnacunnet gets the runnerup trophy 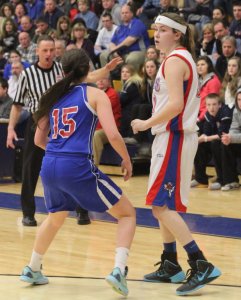 Brittany Roche hit the game winner in the 2014 title game 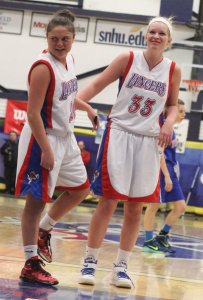 Kelly Arsenault hemmed in by a trio of Lancers 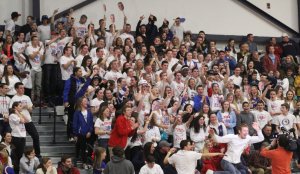