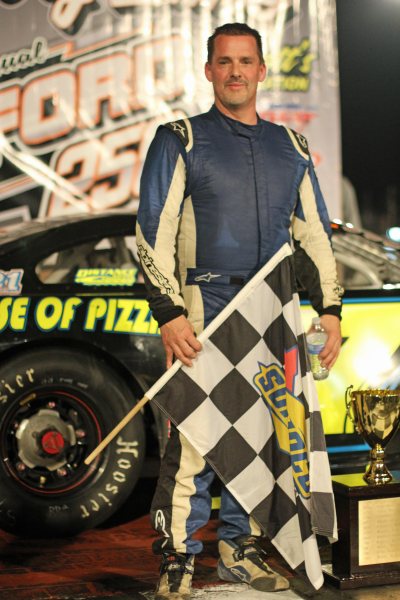 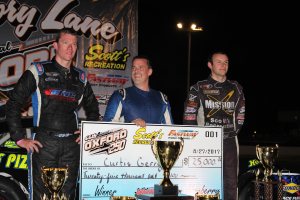 (Oxford ME)  Sunday afternoon/evening I took in the biggest car race in the northeast….the Oxford 250.

Curtis Gerry of Waterboro (ME) was the surprise winner at the Oxford Plains Speedway.  Racing on a low budget, the 46-year-old didn’t even try the 250 last year.  This year, however, has been different.  The wins have come (at Beech Ridge Speedway in Scarborough) and his car has been consistently solid.  He had the fastest practice time during Friday’s OPS practice runs.

Pole-sitter Cassius Clark had the car to beat in the first hundred laps but a sea of cautions (eleven in the first 125 laps) offered too many chances for an eventual lead change.  That finally happened but Cassius would finish strong to get 3rd.

Curtis took the lead with 53 laps left and fought off challenges from Eddie MacDonald (4th) and Reid Lanpher (2nd) to get the $25,000 top prize.

The sunny/cool weather was perfect for the race.

This race had seventeen cautions.  Almost all of them were caused by individual drivers losing control and spinning out.  There were a couple of multiple-driver incidents but little damage done.  You become aware of the skill of these drivers when you witnessed seventeen restarts on a 3/8-mile track and watched them repeatedly avoid sideswipes on the tricky turns on the small track.

If this entry was for a newspaper it would end shortly but it’s a blog and I get to personalize the Oxford 250 experience.

The big guy in the racing “room” today was Speed51.  These folks were everywhere.  They had the equipment and personnel to thoroughly cover the race.  I realized the extension of their clout when I moved to my favorite viewing spot on top of the grandstand.  Been up there for years.  Didn’t last this time.  A Speed51 person informed me that they had exclusive rights to that space.

Now how would I get pictures?  I can assure you that I had no plan to hang out in the infield as the race went around me!  I saw photographers doing it but it was never a possibility for me.

One of the OPS staff members recognized what had happened to my usual vantage point and directed me to a windowed booth.  The beauty of that spot was that there was a (closed) door which lessened the deafening car noises.

I never had any intention of being in the infield.  Why?  Things happen too fast.

I had discovered earlier in this afternoon that the pit area can be dangerous too.  The pit areas are tight.  You have drivers, cars and crew/family members milling about.  And then there are the photographers, like me.  When races are in progress the cars come fast into the pit area where quick attempts are made to fix problems and get the car back out into the race.  Everyone has to be alert or you can get hurt.

I have been a fan of Eddie MacDonald’s ever since I learned that he was from Rowley (MA). I supply pictures to The Town Common which is headquartered in that town.  Eddie won the Oxford 250 twice (2009 & 2010).

I did not expect to see Eddie at today’s race because there had been zero news that he was coming and he wasn’t in the field in 2016. However, I saw in the early afternoon that he indeed was competing.

The starting positions for the race are determined by performance in qualifying heats.  Qualifying waivers are given to former winners but if they want to start up in the field they must qualify for a better placement.  Competing against drivers who don’t have waivers makes the going extremely rough-and-tumble as Eddie found out.  Twice in the consolation race he was knocked off the track.  The second time he decided to come into the pits to get repairs before re-entering the race.

That’s where Eddie and I got “together.”

I saw his car turned around in the infield during a qualifying consolation race and then I saw him heading for the pit area for repairs.  I decided to get closer to get a picture of the repairs being done in the pit area.

After taking this picture I moved to the left of the tire. Little did I know that Eddie MacDonald in the red car ahead would reverse into me.

Eddie parked his car perpendicular to his normal space.  I took a picture of the work being done and then moved to safety in a spot beside a car two spaces away from Eddie’s space.

I suspected that Eddie would do a quick forward turn and head back to the track when the repairs were done.  Instead, he came my way in fast reverse.

I was beside another car two spaces away and clearly off the roadway but it didn’t matter.  Eddie didn’t realize that there was a car parked in the direction he has chosen to go and he definitely didn’t see me.

I turned to avoid a direct hit and Eddie’s car drove me into the parked car.  I believe that Eddie realized at the last second the bad route he was on and hit his brakes.  I would have been in a morgue, instead of writing this entry, if he hadn’t I suspect.

I never went down and I do not recall Eddie’s car leaving the scene.  I do know that he went back out and competed.

Instantly there were folks coming from everywhere seeing if I was all right.  I told them that I thought I was.  I was offered a chair which I gladly took.  In a while, I stood up to see if my legs were okay.  I felt some soreness in my right side but nothing serious.  People offered me water.  Some of them were my daughter’s age.  The one that meant the most was a young lady who was probably my granddaughter’s age.  So young and yet so thoughtful!

A lady connected to the OPS medical staff talked to me several times.  She wanted me to come over to where the ambulance was and I started imagining a trip to Norway’s St. Stephen’s.  No thanks.  Not needed.

I was asked if I was with anyone.  I wasn’t and there would be no other ride home.  My wife wasn’t going to be called.  No need to worry her because the pain was minor.

As these numerous interactions were taking place the consolation race ended.  Before I knew it, Eddie and his car were back two spaces away.

I stood up to see if Eddie was there.  He was, with his driver’s suit half off.  He must have known that something had happened earlier, when he backed up into me, because he was looking back to where he had hit me.  I put both of my arms up in the air beside me, gesturing in his direction.

For some reason, at that instant, I decided to go over there and see him.  I approached him and said that I was the one he had hit.  He asked if I was alright.  He said he was sorry.  I told him that I couldn’t understand how the accident had occurred since I was not on the road.  He said that he had been hit a couple of times during the race and wanted to get right back out there and wasn’t careful enough.  I told him not to worry about it that I was okay.

The medical staff person intercepted me after that and had me fill out paperwork stating that I had refused medical assistance.  She said that if there any medical problems tomorrow (Monday) the paperwork was in place to proceed.

One of the witnesses to my getting hit told me that instead of signing anything I should find out who Eddie MacDonald’s insurance was with and sue them.  Future lawyer, I suspect!

You would have guessed that my interactions with Eddie MacDonald ended there, wouldn’t you.  But you be wrong.

I have already described my grandstand “adjustments.”  From that new (better?) position I watched the Oxford 250.

Eddie was nearly dead-last in the 43-car field at the start.  But in a long race things happen.  With thirty laps left of the 250 laps, Eddie was in second hounding leader Curtis Gerry.  I started imagining that Eddie might pull this one out.  It was not meant to be, however, and Eddie started to slide back.

I figured that I might get one last interaction with him if he made the top three.  Those are the trio that get to pose with the winner’s check.

Eddie, however, ended up 4th.  I worked my way down to the track.  I had media credentials and planned to get shots of the top three.  I didn’t realize that the top five were down there.

I took the expected collection of pictures of the top three finishers and then I ventured over to where Eddie was. 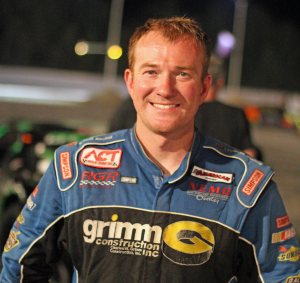 I knew his father by sight from Eddie’s two championships.  Eddie was talking to his father and I headed over to them.  Eddie saw me coming and told his father, “This is the guy I backed into.”  Yup, that’s me!

Eddie’s dad asked if I was okay and was quite concerned.  I said that I was fine.  I repeated that I couldn’t understand how the accident happened.  This time Eddie said that he had been directed to back up by his crew.  It was not good advice.

And that’s my version of this year’s Oxford 250. 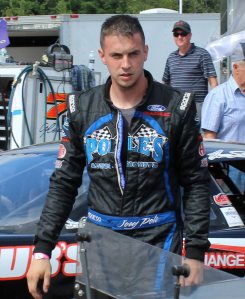 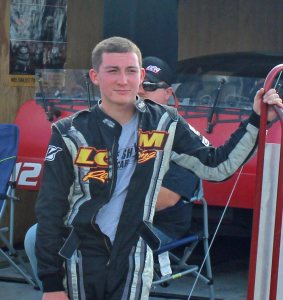 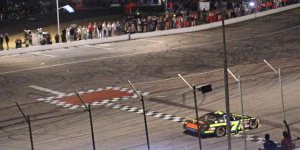 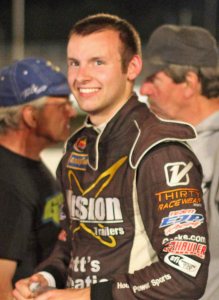 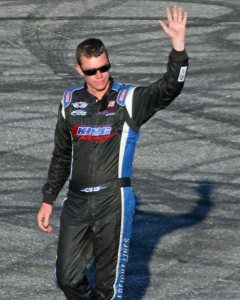 Cassius Clark was the #1 qualifier 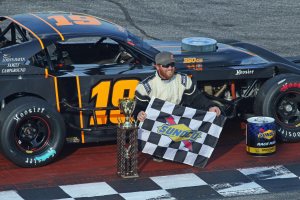 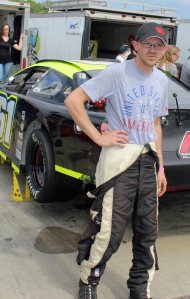 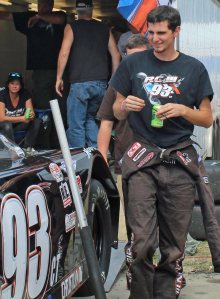 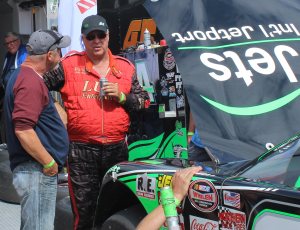