(New Haven CT) The Yale Bulldogs (1-1) won their first game of the young season, 3-0, on a very rainy Sunday afternoon at Reese Stadium.

The home team put plenty of pressure on Bison goalie Carlos Caro (17 shots) and cashed the trio of scores within a fifteen-minute span of the first half.

The visitors (0-3) mustered few shots because they spent so much time dealing with the continuous attack of the Bulldogs.

This was a game of ever-present rain.  There wasn’t much wind, just plenty of moisture.

I try to cover sports in the locations I find myself in.  My granddaughter, who is attending Southern Connecticut, now lives within a mile of the Yale Bowl and so I was looking around for something to use for a blog entry.

I walked to the Bowl on Saturday afternoon and although I couldn’t get inside, I did discover Reese Stadium beside it.  A check of the Yale Athletic website turned up the Yale/Howard men’s soccer game there on Sunday afternoon.

I had a few problems to deal with before I could cover the contest: (1) my press pass was elsewhere, (2) my normal game-shooting lenses were elsewhere, and (3) it was raining. 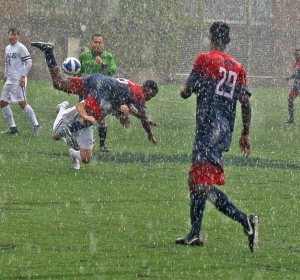 Nigel Grant (#15) of Howard picked up a yellow card after this play.

The press pass never came into play and access to the field was never questioned.  I found an umbrella and I was willing to get what I could get from the small lens I had.

With only one small lens, I knew that much of the field would be out-of-range.  So to get good pictures I needed to know where on the field the action would take place and set up there.

Who had the better team?  Yale or the team from DC?  If I knew that then I could be near the end they were shooting at.

My brief research convinced me that my best picture bet was in the Howard end.  Why?  The Bison had won only FIVE of their last seventy-seven games.  The Bulldogs weren’t overwhelmingly better (nine wins over the same time frame) but they were playing at home.

It was a good guess on my part.  I had a good look at the three Yale goals.

The first two goals had players getting clean looks at the Howard goal.  The third goal had the Yale player collecting his own rebound from in close.

Yale’s second goal on the way 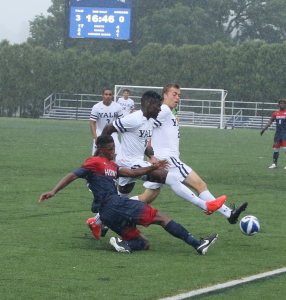 Getting a foot in 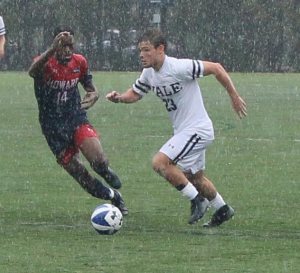 Ball in the air

Sophomore Carlos Caro leaps to make a Bison save 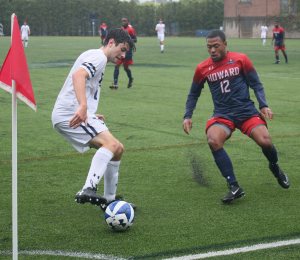 Work in the corner 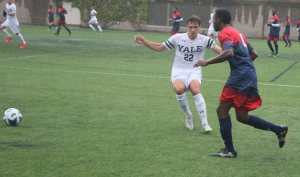 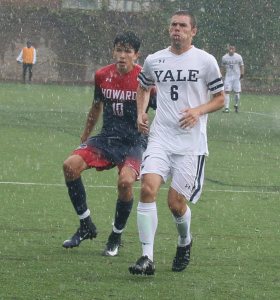