(Naples ME) The Gray-New Gloucester Patriots came into their meeting with the Lake Region Lakers scoreless and winless after two starts.

That all changed versus LR as second-half goals by junior Alexa Thayer earned the visitors a 2-1 victory in a thunder-delayed game on Friday afternoon.

In a matchup of Class B South opponents, the Lakers scored early in the first half when

The Patriots (1-2) controlled play during most of this contest relying on patient passing.  LR took the long-ball approach.

By patient passing I mean being willing to pass the ball back and sideways not straight ahead.  That patient approach set up numerous scoring chances but this was where Lakers GK Maddie Rock stood out denying several GNG point-blank attempts.

The home team held that 1-0 lead until Alexa Thayer responded to a rebound off an Emma Woods shot from the right side and tapped in the game-tying tally with 18:56 left in the second half.  The Patriots were thereby able to end their scoreless streak at 222 minutes.

“We have been focusing on following up on rebounds,” said GNG’s 7th year coach Kiaran McCormack afterwards. “You don’t score style points.  If you can be there for a rebound two yards out it counts the same as a 20-yard rocket to the top corner.”

The Patriots pressure had led to several direct kicks during the game.  On almost every occasion the kick had gone over or wide.  Finally, late in this match, junior Emma Woods put a hard shot on net from straight away on a direct kick that turned up a juicy rebound for Alexa camped to GK Maddie Rock’s right.  Alexa’s tap-in gave GNG the lead and was indeed the game-winner with only 2:28 left. 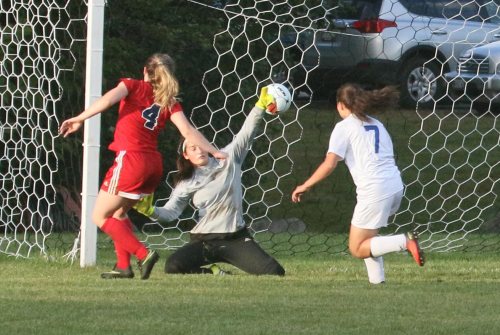 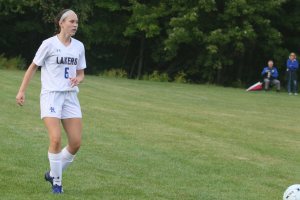 The game got off to an ominous start as the rumble of thunder forced a 30-minute delay.  After that it was typical Maine weather: sunshine, clouds, sunshine, clouds, but in this section of Naples, no more rain.

I was most impressed with the way Gray-New Gloucester kept control of the ball.  Their passing and dribbling forced LR to chase for a high percentage of the game.  That can be tiring and it may have caught up to the Lakers in the end game.

Emma Woods was a standout in the center of the field for the Patriots.  The senior took control of a number of goal kicks and was a skillful dribbler/passer.  Emma also had assists on both goals.

The best player on the field?  I would take junior Neva Leavitt of Lake Region (0-2).  She beat defenders all game long with clever dribbling.

The run back after a goal 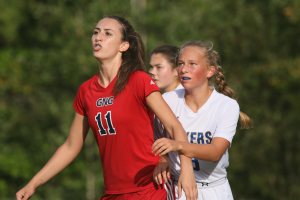 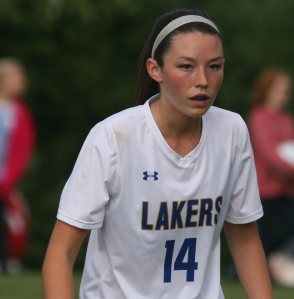