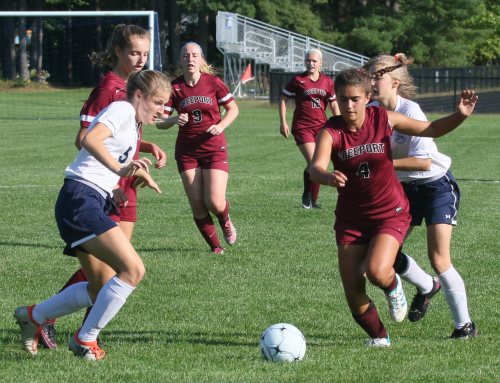 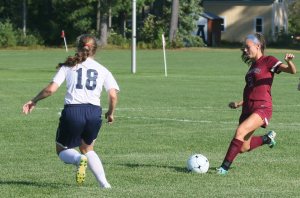 (Fryeburg ME) Freeport ended a two-game losing streak in convincing fashion with an 8-1 win over Fryeburg Academy on sunny Tuesday afternoon.

Six Falcons scored and everyone played in an afternoon of golden chances for the visitors.

Senior Taylor Rinaldi and junior Allison Greuel each had two tallies for Freeport (2-2).

Sophomore Kayla Willard had the Raiders goal late in the second half off a direct kick rebound.

Winless FA (0-4) struggled to get shots.  Freeport was patient in their own end with short passes.  Freshman goalie Carly Intraversato was passed to frequently and her presence up the field lessened the area the defense in front of her had to cover.

Becca Cameron (9) in the middle

The freshman goalie down the other end (Morgan Fusco) faced a ton of good-look attempts by Freeport.  It was the numerous ways that the Falcons got into those juicy scoring situations that impressed me.  I saw the straight away blast (Becca Cameron), the dribble into an open space (Taylor Rinaldi), and unselfish passing in very close (Catriona Gould, Allison Greul).

The goals by Catriona and Bailey were registered in the last minute of each half.

Taylor’s two goals were collected in the first ten minutes of the game.  The 4-year starter dribbled in for a clean look on the first and drilled the second from long range under the crossbar.

Another 4-year starter (Becca Cameron) was a standout in the middle of the field and put a charge into a long shot that GK Morgan Fusco never had a chance on in the first half.

Twice in the second half Falcons’ team members gave up excellent scoring opportunities from very close to set up teammates for open-net shots.  That’s unselfishness!  Last year’s team high scorer (Catriona Gould) did it for Allison Greul and then Allison did the same thing for Lindsay Routhier.

Despite the lopsided result, senior Kalie Eastman and freshman Luna Barrionuevo played well for the Raiders.  Kalie started the game on defense but was moved to offense late in the first half.  Both she and Luna disregarded the score and hustled to create openings for teammates all afternoon.

Beautiful weather with plenty of sunshine.

Fryeburg has struggled on defense since the get-go.  They have been outscored 33-2 in their four losses.

Loose ball in the Raiders end

Becca Cameron on the move

Loose ball in the Fryeburg end