Newburyport explodes in the 4th quarter and defeats Lynnfield 68-55 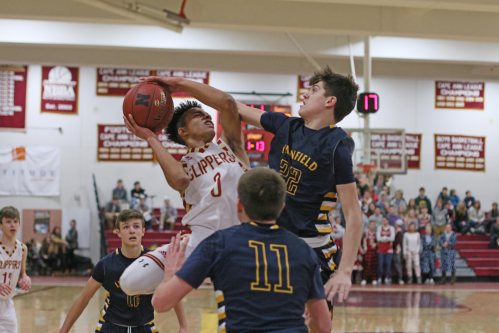 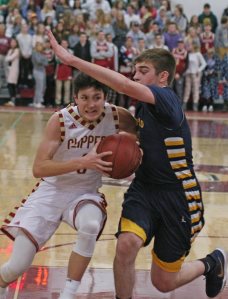 Ryan Archer (17 pts) in the lane with Billy Arseneault

(Newburyport MA) This game was close into the final quarter, and I thought it would go down to the wire.

Newburyport didn’t let that last-shot thing happen, however, as they exploded in the fourth quarter with thirty-one points and defeated Lynnfield, 68-55 on Friday night in Cape Ann League action.

This game was tied seven times with the final tie (45-45) with 5 ½ minutes left.  After that the combination of Ryan Archer long range and George Coryell drives did in the Pioneers.

Ryan’s two 3-pointers and George’s four layups were the major pieces in a 16-6 run for the home team that sealed this one for the Clippers.

“They figured out our weakness (defending on ball) and they took advantage of it,” said Lynnfield coach Scott MacKenzie afterwards.

George Coryell got to the basket four straight times to key the Clippers separation run.  I mentioned George to Newburyport coach Dave Clay and all he said was, “Wow!” 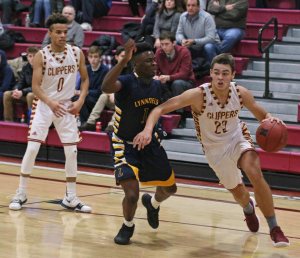 Casey McLaren (22 pts) had seventeen in the first half

George took the ball to the basket throughout the game but in the final quarter there was no help from other Pioneers’ defenders.  Why?  “They paired George Coryell with Casey McLaren on the wing, so we couldn’t offer help,” said Coach MacKenzie, “It was a smart play.”

Anyone playing Newburyport (6-1) knows the trouble 6-5 Casey McLaren can cause.  And the junior caused plenty of that in the first half with seventeen points.  “Casey kept us in the game in the first half,” said Coach Clay.

Casey has the size to shoot over players and the driving skills to thwart perimeter overplays.  What I didn’t see was him posting the undersized Pioneers in close to the basket.

I saw Lynnfield twice last year and was quickly dazzled by #11 (Billy Arseneault).  “Billy is a phenomenal plaer,” said Coach Clay.  “We did our best to contain him but he’s going to have points.”

Billy ended up with sixteen points.  The senior was the Player-of-the-Year in the CAL Kinney Division last season.

Billy not only shoots well but he is also a terrific dribbler and passer.  He isn’t Kyrie Irving, but he sure looked like the Celtic guard on some of the plays he made against Newburyport.

Zach Shone led the Pioneers with twenty points.  He led Lynnfield in chasing down offensive rebounds.

“They had extra chances,” said Coach Clay, “but it wasn’t due to a lack of effort on our part.  We need to work on rebounding in practice.” 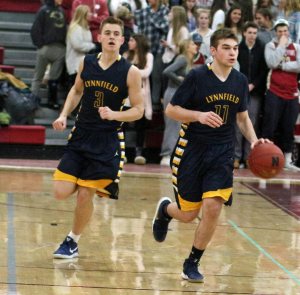 The Pioneers graduated nine seniors off last season’s 18-5 team.  “We’re trying to find our bench,” said Coach MacKenzie.  “We are really only playing five kids and we got tired at the end of this game.”

Coach Clay has great respect for Scott MacKenzie: “I think Lynnfield has the best coach in the league.”

This is Coach Clay’s first year coaching at the school he teaches at. “I am still trying to get to know the team.”

Newburyport went from a 5-point third quarter to a 31-point fourth quarter.

Lynnfield (4-2) certainly didn’t help themselves at the foul line missing twelve of twenty-eight attempts.  It is always a challenge shooting free throws with the Nbpt student section under the basket.  Matt Mortellite missed four straight facing the hostile crowd in the second quarter.

It was the first time I have seen Newburyport cheerleaders at a basketball game. 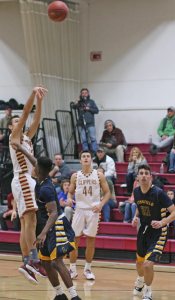 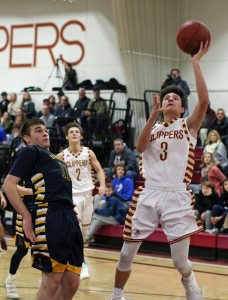 Casey McLaren launches from the wing 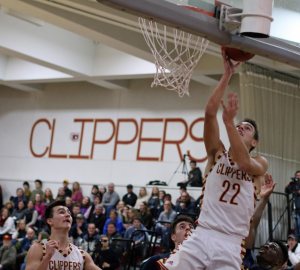 Casey McLaren gets to the rim 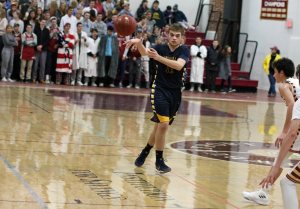 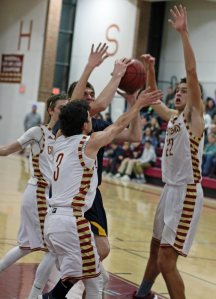 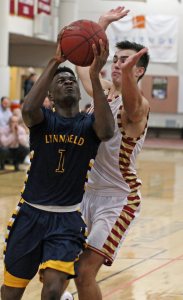 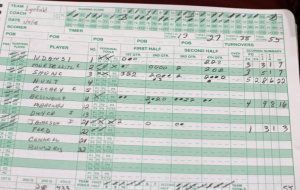