1B Taylor Penniman handles the final out for Triton

(Byfield MA) Triton (12-1) won their ninth straight game this afternoon but it was anything but easy.

The Ipswich Tigers (6-7) had the pitching and hitting to give the Vikings quite a battle before falling, 6-5, on Friday in Cape Ann League action.

“If we don’t hit, we have to be perfect in the field,” explained Triton senior Taylor Penniman afterwards.

The Vikings had been averaging over eleven runs per game but today they ran into junior Katherine Noftall.  Katherine allowed three earned runs and had six strikeouts.

Equally impressive was the hitting of Katherine and her sister Erika.  Katherine was a triple short of the cycle while Erika had two singles and a double. 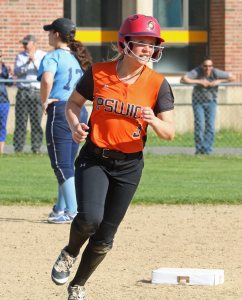 Katherine’s two-run homer over the right field fence in the top of the 7th brought the visitors to within a run with one out.  “It was a nail biter for sure,” recalled Triton coach Dave Dupere.  Pitcher Katherine Quigley, however, ended any further damage with a strikeout (Mya Cuevas) and a ground out (Rowan Galanis).

The streaking Vikings had single runs in the second, third, and fourth.  Their game-deciding runs came in a three-run fifth.

In that fifth, Triton’s Grace McGonagle (3 hits) singled and was joined on the bases by Bridget Sheehan who was intentionally walked.  Senior Emily Karvielis then singled sharply to right.  Grace would certainly have scored on the hit but when the ball rolled past RF Allie Comeau to the fence, Bridget and then Emily also crossed home.  Emily had actually stopped at 3rd but when the Tigers fumbled the relay, home she went with what turned out to be the winning run.  “Emily was there (home) before the throw got there,” said Coach Dupere.”

“That fifth inning was where one run turned into three and it cost us,” said Ipswich coach Brian Seabury.

Triton scored a run in the second when Carisa Boyle drove in Eve Paicos with a double to left.

In the Ipswich third, junior Katherine Noftall drove in sophomore Erika Noftall with a single to center.  Later it was sophomore Mya Cuevas singling Katherine home.

In the Triton 3rd, a Grace McGonagle double was followed by a Bridget Sheehan RBI single to right.

The Vikings pulled in front, 3-2 in the fourth.  An infield bobble (2B Rowan Galanis) enabled Collen McCarthy to reach.  Colleen later scored on a sacrifice fly by Eve Paicos.

3B Colleen McCarthy started the Tigers 5th with a defensive gem stabbing Cat Seaman’s liner.  But Katherine Noftall followed with a double to CF and Mya Cuevas recorded her second RBI with a single.

Erika Noftall reached base (single) before her sister took Katherine Quigley deep in the Ipswich 7th.

Tigers’ left fielder (Mya Cuevas) and center fielder (Cat Seaman) worked together in Triton 4th.  Cat looked as if she had a catch lined up in a tough sun with Mya nearby.  At the last second the ball bounced off Cat’s glove and nearby Mya was able to snag the rebound!

Ipswich had no luck when it came to strategy.  In the Triton 3rd, Coach Seabury wanted to walk Bridget Sheehan (CAL All-Star) but pitcher Katherine Noftall had struck out Bridget in the first.  So they pitched to Bridget and she had an RBI single.

Trouble in the Ipswich outfield in the fifth inning

In the fatal fifth, Bridget came up again and it was decided to walk her this time and face Emily Karvielis instead.  Emily hit an RBI single that ended up scoring three runs.

“When they were going to walk Bridget, I was thinking that our next hitter (Emily) is every bit as good,” said Coach Dupere.  “It sure worked out for us.”

“The Noftall sister were sure impressive,” added Coach Dupere.  “We tried to pitch them in and out, but they still hit.”

“Grace (McGonagle) had three hits for us today,” said Coach Dupere.  “She usually plays small ball but today she was hitting the ball clean and getting on base.”

Sophomore Katherine Quigley registered her 11th win.  She struck out eight and walked one.

I told Coach Dupere that, according to my figuring, North Reading, going into today’s games, had won 45 straight CAL games dating back to 2015.  The Vikings are scheduled to play the Hornets at Triton on May 21st.  “It should be exciting if we can keep playing the way we’ve been playing.”

Taylor Penniman told me that in the fall she will be going to Mass Art in Boston to study graphic design and advertising.

Katherine Noftall also scored three runs for Ipswich.  I saw her drop twenty-five points on Newburyport, including three 3’s, during the basketball season.

Trouble in the Ipswich infield 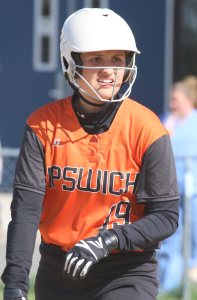 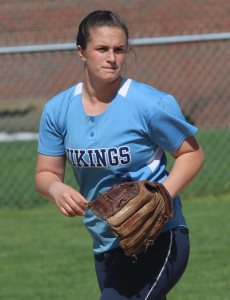