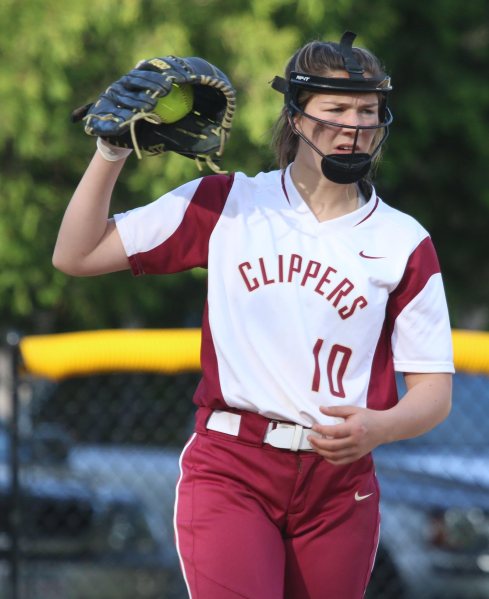 The Clippers stayed away from slugger Kayleigh Brammer

(Newburyport MA) It was the way life should be for the Newburport softball team.

“We kept it together the whole game,” said NHS coach Bob Gillespie after the Clippers had defeated non-league Northeast Metro, 10-1, on a cold Friday afternoon on Pepe Field.

The win gave the Division Two home team their ninth win and a berth in the post-season with two games remaining.

Junior Annie Siemasko said afterwards, “I am so excited about making the tournament.  It’s the first time for me.  We’ve been close before but now we’ve finally made it.”

Northeast Metro coach Bruce Rich and his team were dazzled by Clippers’ starter Paige Gouldthorpe.  The NHS senior tossed a 2-hitter and struck out eight Knights.  “Their pitcher was outstanding.  She’s about as fast as we’ve seen.  She had great location and mixed speeds well.”

“I was able to throw strikes today and get them to hit,” said Paige post-game.

On this successful day, the Clippers (9-7) stayed away from error-driven innings in the field.  Newburyport survived a drop in the 7th (Annie Siemasko) and a collision in the outfield in the 4th.  Northeast Metro wasn’t as fortunate.

Two walks and two errors set up the Clippers for three runs in the first.  Both walkers (Paige Gouldthorpe, Courtney Walsh) and Annie Siemasko (who reached on shortstop Tae Scott’s error) came across.  Freshman Cali Caponigro drove a run in during the NHS good start.

A key to the win was the way Newburyport kept the Knight’s junior slugger Kayleigh Brammer from hurting them.  Kayleigh already has ten home runs this season.  The way Paige was mowing her teammates down, Kayleigh batted only three times and was walked twice.  The third time Paige got her to ground out.

“We kept her (Kayleigh Brammer) off the bases,” said Coach Gillespie.  “She has the ability to play at the next level.”

Annie Siemasko launched a home run to right center in the 3rd to boost the NHS advantage to 4-0.

The Knights (10-5) answered with a run.  Kayleigh Brammer walked and alertly reached third on Kat Zeylaya’s bunt when no one covered third.  Catcher Sarah Linehan’s wild throw to second allowed Kayleigh to score. Paige handled the two-on, two-out situation by striking out Joanna Agostini to limit the damage to one run.

The Clippers fourth was when they expanded their 4-1 lead and gained game-deciding separation from the visitors from Wakefield. 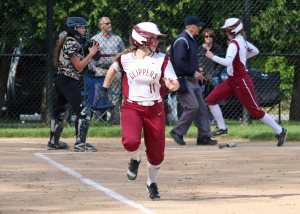 Cali Caponigro (11) drives in a run

Newburyport had tallied only two runs and had two outs in the 4th inning but the inning got extended when pitcher Julia Carrillo couldn’t handle Courtney Walsh’s grounder.  The Clippers would tack on four unearned runs after the miscue. Again, walks played a part.  There were four NHS walks and three scored.

The 10-1 lead carried the rest of the way.  The Knights did get two on in the 7th but a baserunning blunder ruined a promising two-on, no-out’s situation and no inroads were made into the Clippers lead.

Brooke Rogers tagged out at home by Sofie Wyzanski

Northeast Metro (Division Three) is in the Commonwealth Athletic Conference with teams such as Whittier.  The Knights had won three of their last four games before the loss today.

It was a cold afternoon in the shade and not too bad in the sun.

I am always looking to expand my vocabulary.  New word: frenemy.  Paige dropped that one on me to explain her relationship to shortstop Bridget Sheehan of Triton who watched the game.

Bridget’s Vikings (15-1) take on undefeated North Reading on Monday afternoon at Triton.  That should be a game to see……..and blog about. 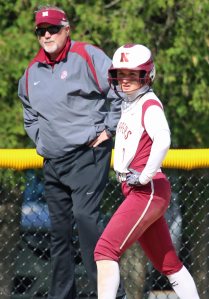 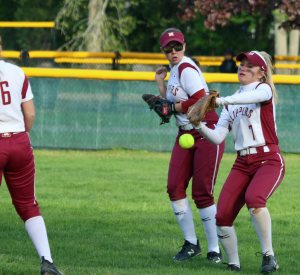 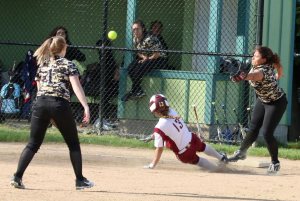 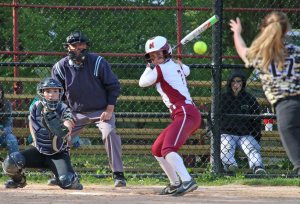 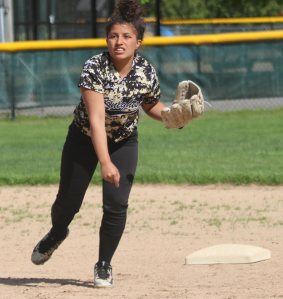 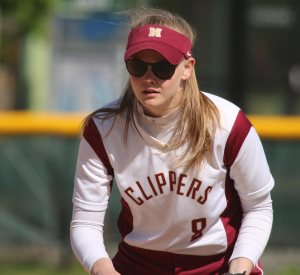