Newburyport rebounds with 9-2 win over Georgetown

Paige Gouldthorpe leaves the field after a big hitting/pitching afternoon 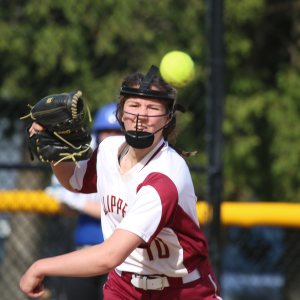 (Newburyport MA) Back in the day there was a popular song with lyrics that started, “What a difference a day makes, twenty-four little hours.”

Those words certainly applied to the Newburyport softball team as they recovered from a 17-1 pounding by Triton to come back the next day and defeat Georgetown, 9-2, on a sunny Wednesday afternoon.

“We did everything we needed to do to win today,” explained senior Paige Gouldthorpe afterwards. “Everyone hit more, and our fielding was definitely cleaner than yesterday.”

Who could argue with any of that?  The Clippers (5-3) whacked fourteen hits, had baserunners galore, and committed one error.

The Royals (1-6) jumped out to a 2 zip lead in the opening frame as some of the bad vibes from the Triton game lingered for a half inning.  Two walks, a wild pitch, and a misread in left (Cali Caponigro) turned into two Georgetown runs.  Caitlyn Donoghue and Maeve McNeil had the RBIs.

After that shaky start, however, the Clippers changed from poor to excellent led by senior Paige Gouldthorpe.

Kate Irons slides as 2B Madi Duford reaches for the ball

After giving up two hits in the first inning, Paige surrendered just one (Kate Irons) the final six innings.  Today Paige also had the strikeout pitch working and set down eleven Royals via the K route.  During one stretch during the 2nd and 3rd innings, she fanned five of six batters.  Impressive!

Newburyport hit from top to bottom.  Everyone contributed.  Annie Siemasko was the only Clipper held hitless, but she did have a run-scoring sacrifice fly.

The Clippers tied things in the first.  Courtney Walsh’s single not only scored Meg Winn but got past LF Caitlin Donoghue allowing the tying run (Liv Salvatore) to cross.

Newburyport took the lead, 4-2, in the second thanks to two G’Town errors (3B Alyssa Gaeta & C Maeve McNeil).

Paige got out of a mini-jam (runner on third) in the Royals third, ending that inning with a strikeout and an assist.

The Clippers most productive inning was the 4th when they pushed across three runs.  Annie Siemasko, Liv Salvatore, and Sarah Linehan had runs batted in.

Georgetown starter Colleen O’Connor walked in a run in the 5th (Paige Gouldthorpe) and then Paige tripled and drove in NHS’s final run in the sixth.

Anyone on hand at Pioneer Park today was also impressed with the defense of Georgetown CF Kate Irons.  “She saved them a lot of runs,” recalled NHS coach Bob Gillespie.  “We probably would have had the ten-run rule except for her.”

CF Kate Irons stretches out for a remarkable catch

Every regular fly ball in her direction was routine for her.  Some of the “routine” ones were well hit.  In the second she made a lunging catch on a sinking line drive.  In the third she fielded a shot in short center and combined with shortstop Brenna Donoghue to get a force out.  I was told that she is also an excellent hockey player.  In today’s game, Kate reached base four times.  Good athlete! 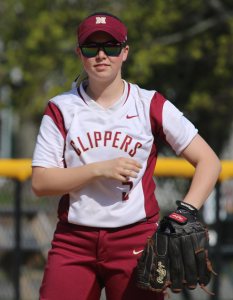 Junior Meg Winn had three hits for the Clippers and scored twice.

The weather was remarkable; 80’s with a breeze.  Don’t expect it to last! 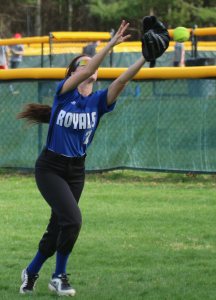 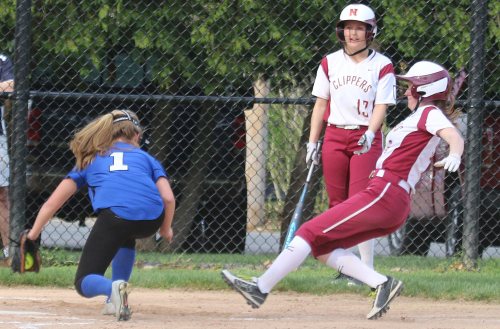 3B Liv Salvatore had two hits and scored two runs 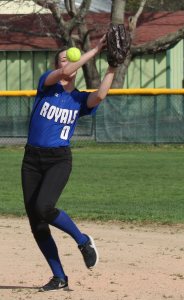 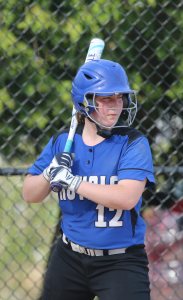 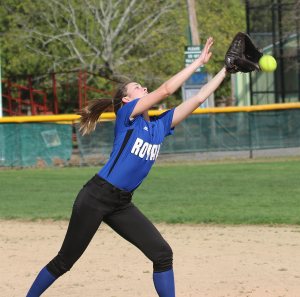 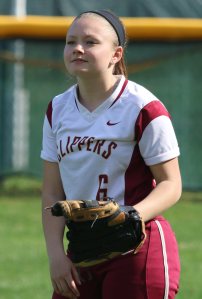 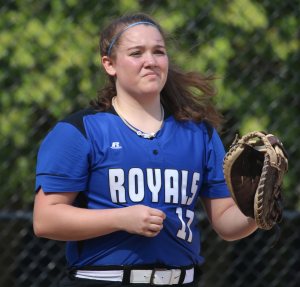