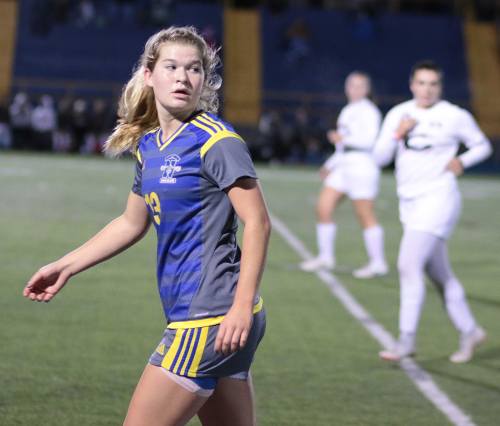 Emma Curtis had a goal and an assist for Newtown

(Newtown CT) It was all that Cheshire coach James Luis would talk about afterwards: Emma Curtis.

“We played against a very special player. She (Emma Curtis) dominated the game and beat us.  That’s it.  End of story.”

Emma Curtis had a goal and an assist in Newtown’s 3-0 win over Cheshire under the lights on Saturday night.

The Nighthawks (8-1-2) have now won five straight and are unbeaten in their last seven games.

“Our ability to defend has been a staple of the program over the last 10-12 years,” said Newtown coach Marc Kenney.  “I don’t think as much about the defensive part of the game because I have confidence in what we can do.”

The Rams (5-3-3) did put some pressure on Julianna Stavola after the 3-goal cushion was in place and NHS had shifted in reserves.

Senior Emma Curtis had everyone’s attention from the get-go.  Two minutes into the game she broke loose down the right side for a clean, low shot that gave the home team the quick lead.

“She took advantage of us from beginning to end,” said Coach Luis.  “We were aware of her coming into the game (Emma was all-state last year) but despite our efforts she was able to turn on us and get good shots on goal.”

It was a perfect start as far as Emma Curtis was concerned. “Cheshire is a team we’re not as familiar with.  We wanted to set the tone right away.”  Mission accomplished.

The Rams didn’t go away despite the one-goal deficit.

Ten minutes into the second half, however, the Rams were put away by two Nighthawks’ scores in little over a minute.

Both second-half goals were off set pieces.  “We’ve been really, really good on set pieces this season,” explained Coach Kenney.  “We’ve scored a bunch of goals off corner kicks and we’re not afraid to head the ball.” 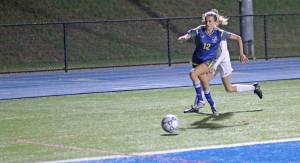 Junior Sydney Howard unleashed a textbook cross from the right corner.  The cross was far enough out that Cheshire GK Seymone Rosenberg couldn’t reach it.  Past her it went and onto the wide-open, waiting foot of freshman Ally McCarthy.  This was at 31:31 of the 2nd half.

More textbook offense in the third Newtown tally.  This time it was a corner kick.

“We work a lot in practice on corner kicks,” explained Emma Curtis.  “We always look for certain players in the center to get a head on it.”  Emma failed to mention the actual corner kick which was her doing and which landed in the middle of a cluster of her onrushing teammates.

One of the teammates was junior Karsen Pirone who drove a header into the net.

Karsen Pirone (6) gets her head on a perfect corner kick

Karsen Pirone (6) after heading the ball in

Newtown GK Julianna Stavola was tested point-blank late in the game but stood her ground to keep the shutout.  NHS has allowed only five goal in eleven games.

Can Newtown stay on the good roll they’re on?  Check back next Friday.  Why?  The Nighthawks have games Monday, Tuesday, and Thursday.  “Next week is rough,” said Coach Kenney.  “We just have to roll up our socks and play hard.”

When I interview seniors I usually ask them about their college plans.  This is what Emma told me: “I was looking at schools for soccer, but I may just not play.  I’ll have to see what’s out there.  If I go to a smaller school I would probably play but at a big school I would do club soccer.”

Coach Kenney: “Emma is super talented.  Her ability to create separation and get in on breakaways for goals has been a key to our success this season.”

It was a fast-moving game with few whistles on a crisp night.

The surface at the Blue-and-Gold Stadium is fast.

One of the adventures of covering high school games is identifying players.  Those of us taking pictures WANT to get the names right.  Sometimes the help we get is minimal.

Rosters online often say one thing while the rosters at the game say another.  Cheshire’s roster online tells me that #5 is Julia Hendrick.  The roster I got at last night’s game doesn’t have a #5.  #5 of Cheshire had a direct shot on GK Julianna Stavola and I had a picture of that action. I’m going with the shooter being Julia Hendrick.

Newtown has a roster online that has Hannah Daly listed as #10.  The roster at the game has her as #2.  That roster online has duplicate numbers.

Cheshire has uniforms without numbers on the front.  Imagine the difficulty that creates for a photographer trying to identify a picture.

Despite all that, a game was covered, and pictures were taken.  I hope with a degree of accuracy.

Newtown celebrates a goal two minutes into the game

GK Julianna Stavola dives for a ball in close

Emma Curtis in the middle of two Cheshire defenders