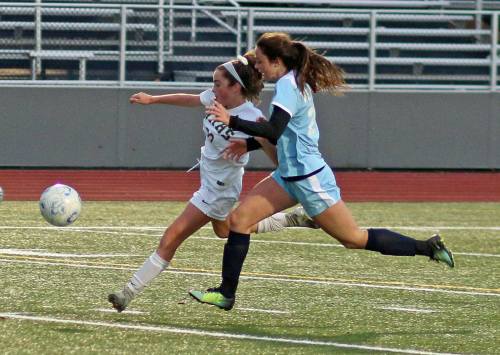 Not a win, but in a season with few of them for both teams, the ending was better than it might have been.

The Vikings entered the game having lost seven straight.

The Hornets nearly pulled this one out in the final three minutes. “We had some good chances at the end,” said North Reading coach Sean Killeen afterwards.

In that high-opportunity final minutes a brilliant rush by Hornets freshman Madison DiNapoli was only thwarted because of an even better defensive effort by Vikings senior Bella Lesinski.  Bella was able to stay with Madison as she raced down the middle and force a shot that was barely wide right.

That dangerous play was followed immediately by another scoring chance on a corner kick.  Alyssa Prusik took it and sent it in the middle where Triton’s Bella Lesinski stepped up and drove the ball back with a header.

Triton cleared the ball toward the other end, but it was only there momentarily.  Back came the Hornets and this time they were awarded a direct kick from straightaway in the closing seconds.  Junior Joanna Kellogg took the kick but sent it wide left as the final whistle sounded.

Not surprisingly, Triton was happy at the end (they survived) and North Reading a bit frustrated (they had serious late-game chances).

But in the bigger scheme of things, neither team lost.

The Hornets started the game with the sun in their eyes and the wind at Triton’s back.  The home team cashed in three minutes into the game.

“We’ve been working on getting our crosses better,” explained Triton first-year coach Dave Ducharme after the game.  Sophomore Kyla Prussman served a textbook cross from the right.

“Elisabeth (Lindholm) collected it and got a good angle to score,” added Coach Ducharme.

Madison DiNapoli was the passer, after a strong run down the right side.  Madison’s pass was far enough out from the goal that Triton keeper Darcie McDonough couldn’t intercept it.  NR sophomore Katelyn Gorgenyi was where the ball was headed but before it got to her it was deflected accidentally by Triton defender Haley Morland into the net.

Ball deflects in off Haley Morland (14)

“We had a little bit of a breakdown on their goal,” said Coach Ducharme.  “It’s called an own goal.”

The final fifty-seven minutes of play largely avoided the goal-scoring areas until that exciting final three minutes in the Triton end.

Joanna Kellogg (10) finishes the game with a direct kick 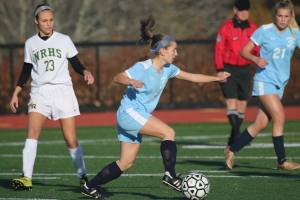 I was impressed with Triton freshman Morgan Hall.  Not tall, but a very skillful dribbler and passer.  “Morgan has rarely been out of any games we’ve had this season,” said Coach Ducharme.

In the first meeting of the two teams (September 21st) Triton was the winner 1-0.  Morgan had the goal in that one assisted by Emily Colby.

North Reading had qualified for the post-season five straight seasons before this year.

Triton won as many games this year (5) as they totaled over the past two seasons.  Their last winning season was the 14-7-2 one they had in 2014.

Very impressed with Triton’s turf field.  Their lights are excellent too.

I’m guessing that a lot of attendees were a bit groggy after witnessing yet another World Series title become a reality late last night. 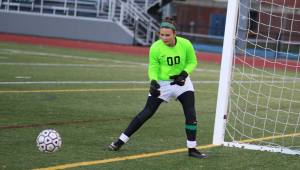 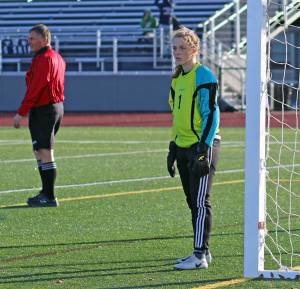 Elisabeth Lindholm looks for a rebound 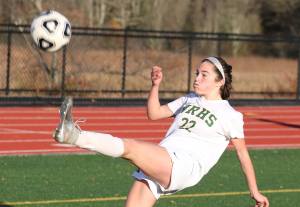