David Gentile (22) above the crowd

(Boxford MA) Those who saw this coming are part of the same (very) small group that expected David Price to pitch so well against Houston.

Lynnfield gained a 2-2 tie with Masco this afternoon at Masco.

When it comes to Cape Ann League opponents, Masco doesn’t lose.  Happened only once in the last 102 matches against CAL teams.  That’s no typo!

There had been six ties.  Make that seven after today.

Back to the improbability of these teams tying.  The Chieftains earlier this season had defeated the Pioneers, on their field, 5-1.

“The difference today was that in the first half we managed to get out, 1-1,” explained Lynnfield coach Brent Munroe afterwards.

Understand that the Masco soccer field clearly has its good end and its bad end.  Defending the “bad” end involves looking directly into the sun, facing the wind, and being noticeably downhill.

Connor Fitzgerald lines up a free kick late in the game

Masco broke the 1-1 tie thirteen minutes into the second half after a lot of good chances.  In the first meeting, the Chieftains (13-2-1) went from there to score three unanswered.  Not this time.

The Pioneers (12-1-2) hung tough today and with sixteen minutes left turned a corner kick into the tying goal. 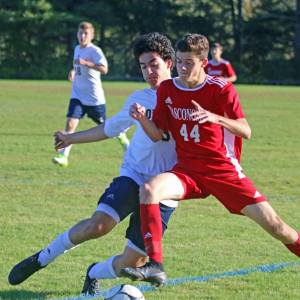 I expected the home team to turn up the pressure but instead it was the visitors with the better chances in the closing minutes.

“I felt like we wanted to go for the tie,” said Coach Munroe, but our assistant coach said that we can win this one.  I’m so happy not to lose to Masco.  The last time we beat them was 2010.  The fact that I know that will tell you how meaningful it is.”

Masco coach Jared Scarpaci came away concerned about conditioning and scoring chances: “Near the end I think that fatigue kicked in for some of our guys.  We left some good chances on the table.”

Coach Scarpaci added that his team needed to work on dead ball plays.  “Both their scores were dead ball plays, one was off a free kick and the other after a corner kick.”

Nathan Bass tallied the first LHS goal.  Nathan was at the heading end of a straightaway free kick.  “It was a long ball into the box,” recalled Coach Munroe.  “Nathan Bass, who wins tons of head balls for us even though he is 5-6, went up, won it and put it in.”  That was scored fifteen minutes into the game. 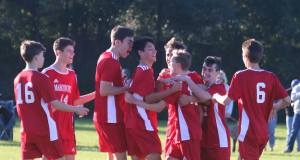 Masco senior Darren Cryan tied things sixteen minutes later.  “Devin Ralph got the ball in from the outside to Darren Cryan in the middle,” said Coach Scapaci.  “Darren shot through traffic and it went in to the side.”

The Chieftains pulled ahead in the second half after misfiring on several glittering chances.  The goal came off a direct kick from Connor Fitzgerald.  The kick was from straightaway and was high. Both Lynnfield GK Jack Campbell and defender David Gentile went for it.  The result was that neither of them dealt with the ball cleanly leaving a juicy rebound for Masco’s Harry Kessel.

“Harry came off the opposite side,” said Coach Scapaci.  “He followed the shot and headed it in.”

The Pioneers had an answer to the Masco goal eleven minutes later.  Jon Luders took a corner kick and the LHS senior sent the ball to the far post where teammate David Gentile got a head on it.

“David Gentile hit the ball back across the goal,” remembered Tom Buston. “I was on the near post and it came right to my feet and I placed it in.  I had taken a wide run in on the corner kick and they (Masco) weren’t ready for me to be on the front post.”

Masco certainly had the upper hand in scoring chances, but Jack Campbell, in the Lynnfield net, made wise decisions.  “Their goalie had great positional play,” said Coach Scarpaci.

“Both of the kids that scored (Nathan Bass and Tom Buston) have about ten goals each,” said Coach Munroe.

Senior Jon Luders was excited about the Pioneers good showing. “We gave it 100%.  It was awesome.  We have so many great athletes on this team.  Every guy on the field is a special, special player.  I love the way we’re playing right now.”

Jon told me that he has committed to going to Seton Hall next year to play baseball.  “Soccer too?” I asked.  “I’ll be sticking with baseball,” he said.

The last time I saw the Masco boys play was in the 2016 D2 title game versus unscored on Nauset.  The Chieftains did get a score but lost 2-1 at Manning Field in Lynn.

Lynnfield is unbeaten in their last seven games.  The tie today ended an eleven-game win streak for Masco. 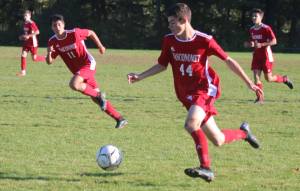 Masco’s only loss in the last 102 matches against Cape Ann League opponents was in 2015 against Pentucket.

A key to the tie today for Lynnfield?  Keeping high-scoring Josh Rubin in check.  Josh has had several hat tricks this season including one against Lynnfield in their earlier meeting.

Nice weather for the last part of October. 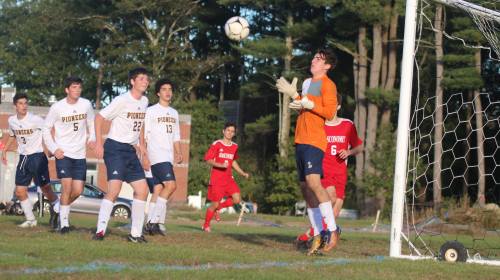