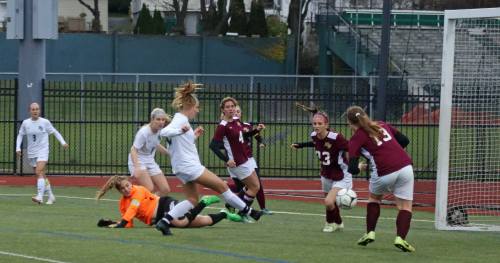 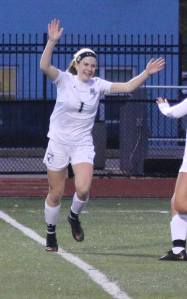 Maya Baker had a goal and two assists for the Hornets

(Lynn MA) The starting time for Sunday’s Division 4 North finals between Amesbury and Manchester-Essex is 11AM.

I alert you to that because after seeing Manchester-Essex twice I know that they can strike early.

I saw it against Amesbury during the regular season; goal in forty seconds.

I saw it today in the D4 semi-finals against Mystic Valley: goal in twenty seconds.

And the Hornets (15-3-2) weren’t finished in either game.  Two more goals were scored against both teams in the next ten minutes.

Both of those games were history before halftime.

ME coach Luke Cosgrove put it succinctly: “We want to start fast, score goals, and keep it tight in the back.”  Mission accomplished against the #1 Eagles tonight in the D4 North semi-finals.

Dasa Hase and Jillian Bowen both scored twice for the Hornets.  Junior Maya Baker had a goal and two assists.  Lily Rhuda had a second-half goal for Mystic Valley.

Jillian Bowen (2 goals) about to take a penalty kick

Seedings can be misleading because they’re based only on a team’s record.  In other states they tweak the seedings based on the strength of schedules.

The team from Malden came in with an excellent 16-2 record.  They had allowed only one goal in their last seven games and had scored thirty-nine goals.

The problem for the Eagles was that they play in the Commonwealth Conference.  “We have a much weaker schedule,” said MV coach Lauren Henry afterwards. 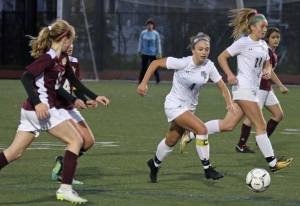 “We’re not used to facing a team like Manchester-Essex.  They were bigger, faster, and had a lot of skills.”

Manchester-Essex is in the Cape Ann League where very competitive opposition abounds and teams toughen each other up for tournament play.

The Hornets will face a familiar CAL foe in Amesbury on Sunday (Remember 11AM) in the D4 North title game.

I was very impressed with the passing skills of Manchester-Essex.  Teammates getting open were rewarded with feeds.

Right from the get-go, ME was unselfish.  Maya Baker brought the ball down the left side, drew defenders, and sent a pass past MV goal Gwen Rhuda to sophomore Dasa Hase in front.  Quick score, twenty seconds into the game.

Less than two minutes later Maya Baker broke down the same wing.  MV was now concerned about Hornets in the middle.  Maya shot, instead of passing.  2-0 with just over two minutes gone by!

I quickly realized that MV’s stats, coming in, would not mean much to this-night’s Hornets.

The ME offense was impressive, but their defense led by Jade Cromwell was just as good, keeping the Eagles in their own end for most of the first ten minutes. 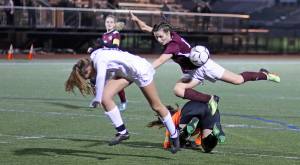 Action near the MV goal

Mystic Valley started to be able to get the ball into the ME side of the field but often the Hornets responded with more scoring chances.  One of those was a marvelous setup by Dasa Hase for freshman Elorie Willwerth.

At 9:11 Dasa Hase finished off a lengthy breakaway with her second goal of the game.  4-0.

Five minutes later Maya Baker put an excellent pass in front to Isabel Musco that was finished at 4:18. 5-0.

Hornets coach Luke Cosgrove substituted frequently in the first half and continued to do that in the second half.  “Blessed are the merciful for they shall obtain mercy.” 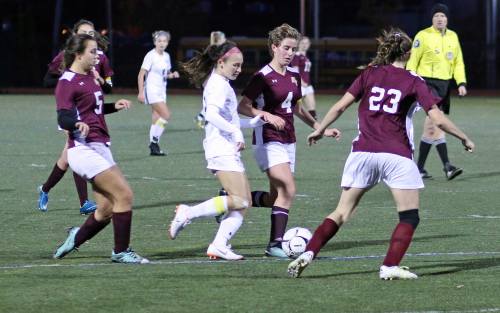 Senior Jillian Bowen tallied ME’s 6th goal ten minutes into the second half.  She put on a dribbling clinic (as my picture shows) through several Eagles to get into a shooting position.  “It was a team effort to get the ball up there,” Jillian explained.  “I took my space and took my shot when I had it.”  6-0.

Mystic Valley finally scored four minutes later.  “Shelagh Downes was outside the box,” recalled Coach Henry.  “She kicked it into the box and Lily Rhuda was fortunate enough to be right there and kicked it over the goalie’s head.”

Coach Cosgrove describing Jillian Bowen: “She has played well every week, every game.  She’s been doing it since preseason.  It’s great that she’s getting rewards for her hard work.” 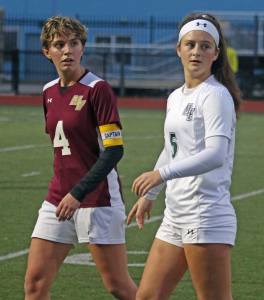 The Hornets are undefeated in their last ten games dating back to a 3-0 loss to Division 2 Masconomet.

Jillian: “We know Amesbury pretty well.  It’s going to be a battle.  A quick start will be best for us.  We’ve have been preparing all season for them.”

Coach Cosgrove: “We split with Amesbury during the regular season but we’re a different team from game one (loss to Amesbury).  We’re more experienced.  We’ve had more time together and be able to coach them up and find our strengths and use them.”

College plans?  Jillian: “I have verbally committed to play soccer at St. Mary’s College in Notre Dame, Indiana.  I have a lot of family connections out there.  I am planning on doing a five-year engineering program.” 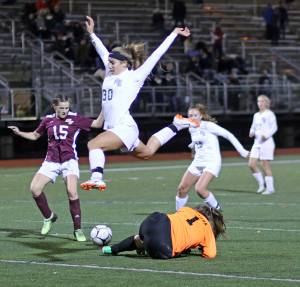 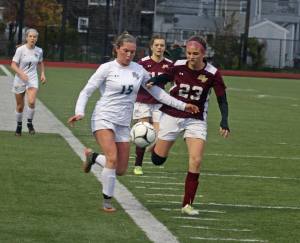 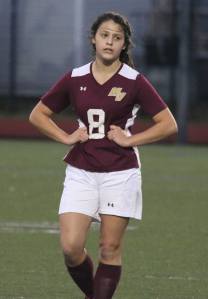 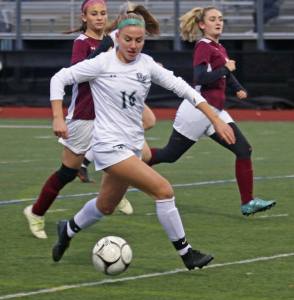 Dasa Hase on the move 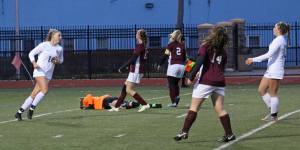 Dasa Hase after scoring the 4th ME goal