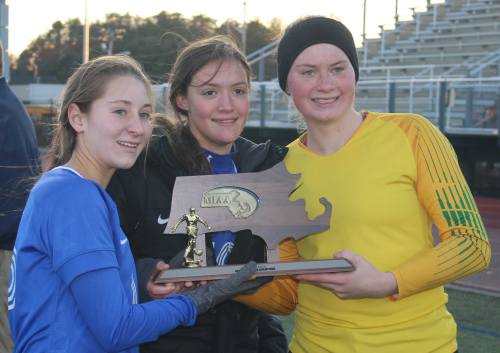 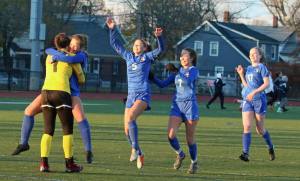 Brookline put the 19th together this afternoon defeating Lexington, 2-0, in the Division 1 North finals at Manning Field.

Junior Maya Leschly paced Brookline with an assist and a goal.

The Warriors (15-1-5) will be back in Lynn on Wednesday in the D1 state semi-finals.

Their opponent will be determined in the D1 South finals between #1 Newton South and #10 Natick on Monday.

A win by Natick would lead to an interesting rematch with Brookline.  Both teams are in the Bay State League and Natick has a win and a tie against the Warriors.

I saw Lexington put plenty of pressure on North Andover in their semi-finals victory.  Not today.  The Warriors did an excellent job of containing sophomore Aleia Gisolfi-McCready and freshman Kirsty Carnan.

“We haven’t been here before,” said Lex coach Alex Caram, “and they have.  I think experience really played a factor.”

That lack of experience put Brookline on the board (24:49) in the first half.

Unable to clear, the Warriors had time to send the ball from the right to an uncovered Maddie Priebe.

Maddie Priebe (6) about to kick a bouncing pass

Maddie Priebe (6) gets her left foot into a shot

Shot on the way

The BHS junior put a strong left foot into a bouncing pass and beat Lexington goalie Eliza Stokes with a shot just inside the near post.

“Maddie is one of our smartest players,” explained Brookline coach Robert Sprague post-game.  “She’s not a big player but she knows where to be to get that type of shot.  She’s scored a handful of goals like that this season.”

Junior Maya Leschly had the assist: “We have been working a lot this week on getting wide and crossing it into the box.  I did my part and Maddie had a great finish.”

In seeing Brookline for the first time, I hadn’t witnessed Katherine McElroy (Warriors goalie) in action.  I had read about her, recruited by D1 Michigan, but hadn’t seen why.  Now I know.

Goalie Katherine McElroy about to take a free kick. 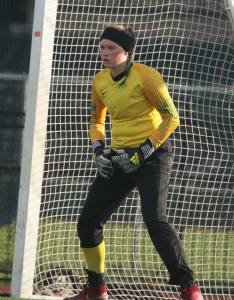 On Brookline free kicks, it was Katherine taking them.  The first one I saw her take traveled over fifty yards!  She took at least seven of them and they were all landing in the box area with plenty of pace on them.  The only exception was a kick from straightway (I have a picture of it.) that went just over the crossbar.  Credit Lex goalie Eliza Stokes for handling everything Katherine sent her way.  What a weapon!

“We were prepared for her kicks and Eliza did well against them,” said Coach Caram.  “We just couldn’t get behind the defense to really test her.”

Brookline’s one-goal lead carried into the second half.

Lexington, despite some good midfield play by Carolyn Lane, could not mount an attack with the formation they were using.  Desperate times require desperate maneuvers.

“We went to three in the back,” said Coach Caram.  “It was a chance we had to take to push our numbers forward.”

With fewer players defending, the Warriors collected the back-breaker at 7:39.  Sophomore Sam Friedman raced down the right side and had time to send a pass to a wide-open Maya Leschly breaking down the middle.  Brookline 2, Lexington 0. 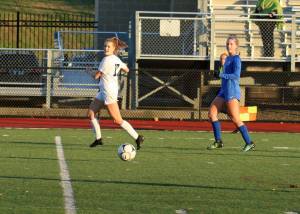 “We’ve been working on that back-post cross for about half the season,” recalled Coach Sprague.  “Maya was in the right spot and took a nice touch on it.  She made it look easy but in a big game like this it wasn’t really that easy.”

Maya Leschly: “Sam (Friedman) was so selfless.  She saw me and passed it where I could shoot. It was a great pass.”

“No one expected us to even be here,” said Coach Caram.  “I think we really elevated our play in the tournament and surprised a lot of people.  We had great leadership and I’m so proud of these girls.”

The sun was shining but it didn’t fool anyone at Manning Field.  There was a breeze that felt like the next season we experience in these parts.

Brookline has given up only eight goals in twenty-one games.  They’ve scored thirty-nine goals.

Brookline is in the Bay State League while Lexington is in the Middlesex League.

Coach Caram: “We’re a really young team.  Now we have experience for next year.  Hopefully we can get back here again.” 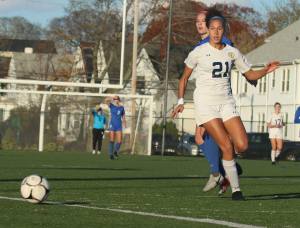 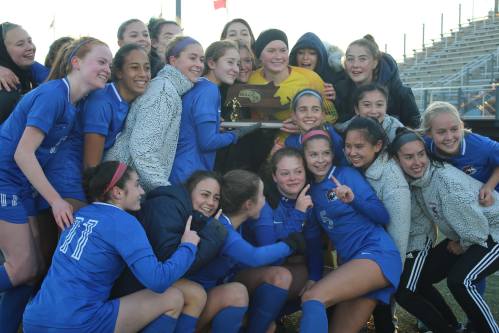 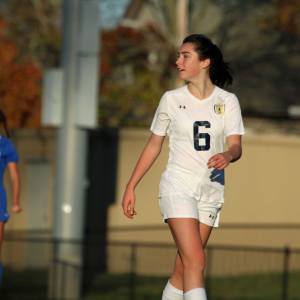 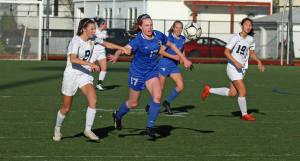 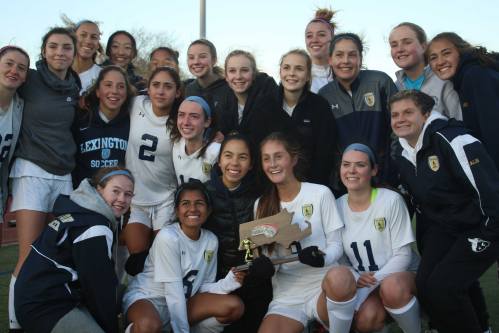 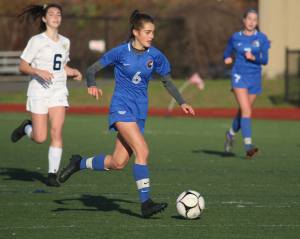 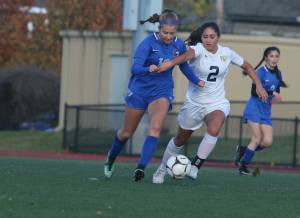 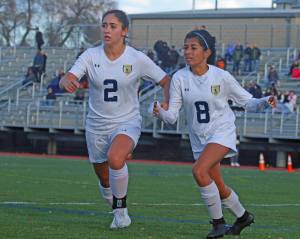 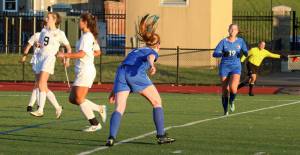 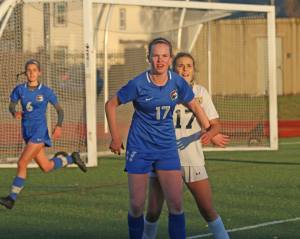 Maya Leschly in front and Isa Lundstrom Svahnqvist in back.