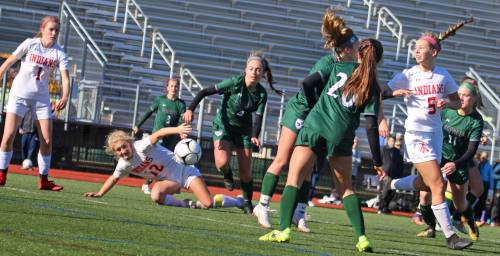 (Lynn MA) Last time I saw the Manchester-Essex girls soccer team play Amesbury it was October and they scored early and often defeating the Indians, 3-0.

In the rematch today, the Indians won the Division 4 North title, 2-1, in double overtime at Manning Field.

Amesbury (15-3-4) moves on to the D4 state semi-finals on Wednesday against the South winner.

Chelsea had both goals for Amesbury, including the game-winner, while Alli was a strong presence in net.

Chelsea did not play in the 3-0 October loss, while Alli played just the second half after returning from an injury.

To take this back even further, the two teams met at Manchester-Essex in September.  The Indians won, 2-0.  Amesbury goals?  Both by Chelsea Lynch. Alli Napoli was in net for the shutout.

Both teams capitalized on misplays in the box during regulation; Chelsea Lynch in the first half and Jillian Bowen in the second half.

The longer this game went between the two Cape Ann League rivals the greater the emotional gap would be between the winner and the loser.

Dasa Haser was in the Amesbury box 1 ½ minutes into the second overtime but her shot went wide left.

Alyssa Pettet sent a direct kick toward the left post with 3:15 left in that second OT but Maddie DiPietro couldn’t finish.

Next Amesbury possession freshman McKenna Hallinan got by one Hornet and passed ahead to Chelsea Lynch in space.  As the space closed, Chelsea shot past GK Bella Pomeroy just inside the near post.  Game over.

McKenna Hallinan gets by a defender before setting up Chelsea Lynch

After the game-winner is scored.

Emma DiPietro hemmed in by Hornets

“What an ending,” said Amesbury coach Adam Thibodeau afterwards.  “Last year we got bumped out in a similar situation (state semifinals).”

Chelsea Lynch: “That last goal was a full effort from everyone behind me.  It came from midfield.  McKenna (Hallinan) made a beautiful pass to me.  Everything was going so fast.  I knew I had to take advantage of the opportunity because there weren’t many of them.”

Very difficult loss for Manchester-Essex.  Amesbury had taken them out last year in the D4 North first round.  The Hornets improvement over last year was very evident.  They beat out Amesbury to win the Baker Division of the Cape Ann League and they were a higher seed (#4) than Amesbury (#6).

ME coach Luke Cosgrove has twice told me that what he wants from his team in a game is to, “start fast, score goals, and be tight in the back.”

When I looked at this D4 North final matchup I knew what ME wanted to do.  But they couldn’t.  The most dangerous of the Hornets (in my opinion) was Dasa Haser.  The talented sophomore is very fast, can get past defenders, and knows how to score.  She had two in the October win over Amesbury.

Dasa showed off her speed today but most of her shots were from long range.  There was one time in the 2nd OT, however, where she had the ball in the box, but Amesbury had three defenders and the goalie in front of her.

I waited for ME to score first but instead it was Amesbury exciting the crowd in the first half (15:13).

Chelsea Lynch had a chance for a separation goal ten minutes into the second half, but her shot was just wide left.

As the game moved into the latter stages of the second half it looked as if one goal might be enough.  It wasn’t.  Credit the Hornets.  They persisted and persisted finally tying things with 8:49 left as Jillian Bowen drove home a loose ball in the box.

Now we had ourselves a ballgame! 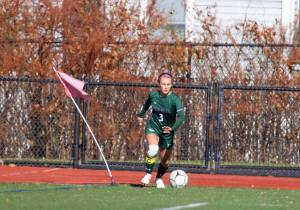 In the deciding second overtime, Amesbury had the wind to their backs and the sun was in GK Bella Pomeroy’s eyes.

There was no ten-minute cooling off period after the game for Coach Cosgrove.  He wasn’t happy with the loss and who could blame him.  I talked to Amesbury coach Adam Thibodeau right after the 3-0 loss to Manchester-Essex in October.  He wasn’t real happy either!

The Amesbury style of play was not to Coach Cosgrove’s liking. “We want to pass the ball around defenders.  They run real fast and try to intimidate defenders.”

No official will admit this, but in these big games, they would prefer to let the teams play without interfering.  Things are let go and there will be collisions.  Players go down and there are no calls.  Both sides get upset.

The key to the Amesbury win?  Limiting Dasa Haser.  “They definitely did better on Dasa today,” said Coach Cosgrove. “When players like that get into the right spot, they can score goals against anyone, but Amesbury had some tough defenders on her.”

Maddy Creps was one of them: “There was a lot of running trying to keep up with her (Dasa).  I felt that we did a pretty good job of containing her.”

“We knew that both teams were ready,” said senior Emma DiPietro afterwards. “We knew it would be a huge battle.  Last season in the state semi-finals we lost in double overtime.  We didn’t want that to happen again.”

Manchester-Essex cruised through opponents in the D4 North tourney.  “We were ready for a tough game after a tight win over St. Mary’s (1-0) in the semis,” said Coach Thibodeau.

Amesbury’s Alyssa Pettet claimed that a change of style was key to the win: “We got into just kicking the ball.  We had to change back to our game and keep the ball on the ground and try to complete passes. We did that, and we scored the winning goal.”

The sun was shining and the breeze wasn’t as strong as it can be at Manning Field.

Manchester-Essex finishes 15-4-2.  “We had a great season,” said Coach Cosgrove.  “Our kids did everything we asked.”

Action along the sidelines 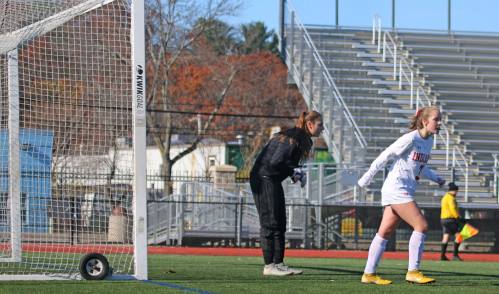 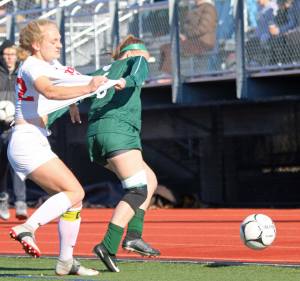