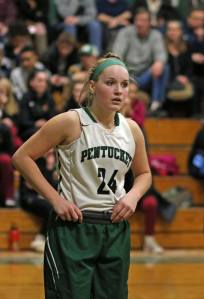 There are times when you’re sure that the Sachems must be using extra players because of the way they double team opponents.

Tonight their defense was good but 3-point shooting was even better as they defeated Newburyport, 68-44, on a very cold Monday evening.

Pentucket (12-1) has now won nine straight and have the best record in Division 2 North.  Swampscott is the only other D2 North team with one loss, but they’ve only won eight games.

Newburyport’s first-year coach Karen Grutchfield saw Pentucket in person for the first time. “They’re too good if we’re not smarter on each possession.”

The Sachems had good offense going from the get-go.  They jumped ahead 8-2 and ran that lead to 19-9 with two minutes left in the first quarter.  By then Pentucket had already drained three 3’s and they added another triple before the quarter ended and led, 23-9.

The Sachems would edge further ahead (36-18) at the half. 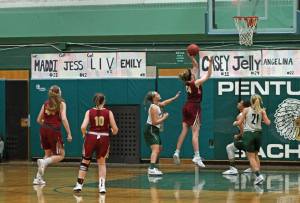 The first two minutes of the second half settled the outcome.  Three different Sachems dropped three’s while at the same time NHS was held scoreless and had two turnovers.

Angelica Hurley (21 points) had the first triple after the possession was kept alive with two offensive rebounds.

Next it was Maddie Doyle assisted by Angelina Yacubacci.

Those two minutes of long-range accuracy combined with shutdown defense extended the Sachem lead to 45-18.

“I give Newburyport credit,” said Coach John McNamara after the game.  “I thought that they out-hustled us in the second half.”

The Clippers (6-5) did put a nice run of ten unanswered points together at the end of the third quarter.  Both Katie Hadden and Anna Hickman (14 points) had multiple baskets during this stretch.

“The reason we won tonight was because we played together as a team,” explained Angelina Yacubacci afterwards.  That teamwork showed itself on defense as the Clippers had little space even to attempt 3-point shots.  The telling statistic was that Pentucket made eleven 3’s while Newburyport didn’t get any.

Coach Grutchfield: “It took us a while to get acclimated to what they were doing.  We have to be smarter with the ball and make better decisions.  I think that we can compete with them if we play better.”

Coach McNamara: “It’s human nature to let up.  We were up-and-down in the second half which isn’t always going to cut it.  We need to be more consistent.  We’ve got some work to do.”

Angelina: “We need to work on executing our offense better.”

Coach McNamara regarding all the made three’s: “I don’t know if they’re a good thing or a bad thing.  Maybe we’re settling too much?”

Jess Galvin had sixteen points with eleven of them in the breakaway first quarter.  She also had four triples.

Kelsi McNamara (St. Joe’s) was in the house.

Casey Snow (11) heads for the hoop

Jess Galvin had eleven points in the first quarter