Maybe it was the pre-game talk.

“We talked before the game about how big this one was,” explained senior Molly Elmore.  “We wanted to turn our season around and have a winning season.”

“It was our best game of the season,” said NHS coach Kevin Sheridan.  “Things clicked today.  I’m really proud of them.”

The Clippers tallied two goals in each half.

Newburyport (3-3-1) missed the tournament last year (7-8-1) after a run of very successful seasons.

The losses for the Clippers this season have been to Masco, Pentucket, and Lynnfield.  There will be second chances against those teams and today’s impressive performance by the home team may help the second time around.

North Reading (2-2-3) has now lost five of their last six tries against Newburyport.

“They outplayed us in the first half and got those two goals,” added Hornets coach Sean Killeen post-game.  “In the last ten minutes of the game we pushed forward trying to get a goal back.”

Instead of getting a goal and closing to within one goal, the shorthanded NR defense gave up two goals to senior Cricket Good in the final six minutes.

A lot of the team’s success had to do with passing and positioning, according to Coach Sheridan: “They stayed connected and always had someone available to pass to.  We got into the right position which makes things calm and organized.”

That good passing factored into all four of the Newburyport scores.

Reserves Vilde Stoeveld and Liberty Palermino combined nicely on the first goal (21:29).  Vilde dribbled down the right side and drew North Reading GK Julia Thorstad to the near post.  Vilde passed across to the front of the goal where teammate Liberty was uncovered with an open net to shoot at.  1-0 Newburyport.

At 9:18 senior Meaghan O’Leary dropped a corner kick from the left to an uncovered Molly Elmore in the box. Molly redirected the kick on the fly. Newburyport 2-0.

“I was perfectly set up by Meaghan,” said Molly.  “It was an unbelievable kick.  She can put them right in the perfect place in the box.”

The Hornets, like the Clippers, had an off season (4-10-4) last year after a string of winning seasons.  They have ties this season with Lynnfield, Pentucket, and Amesbury.  They are a good team.

North Reading was better in the second half of today’s game, but it wasn’t enough on this day.

“That’s how it went today,” said Coach Killeen.  “We’ll see them in North Reading in a couple of weeks.”

Cricket Good’s two goals in the last six minutes of the second half were assisted by freshman Deidre McElhinney.  “She put the ball right on my feet.”

One the first goal Cricket (St. Anselm’s commit) was going down as she shot.  On the second one Deidre fed her into open space with only the goalie to deal with.

“There were some great passes in the offensive third today,” said Coach Sheridan. 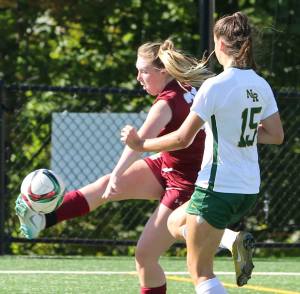 Cricket Good: “This was our biggest game of the season and we knew that going into it.  The outcome will help us with our confidence.  We really showed up well.”

Molly Elmore: “We’re a deep team.  It’s nice to see everyone getting a lot of time.  We stress working together and playing for each other.  I think that everyone had their best game today.”

Temperatures in the 70’s with plenty of sun on this Friday afternoon at Stehlin Field.  A football game (Newburyport/Ipswich) was scheduled to follow on the same field at 7PM. 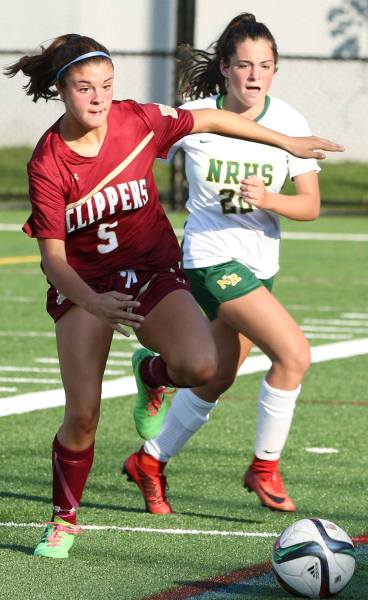 Loose ball in front of the North Reading net 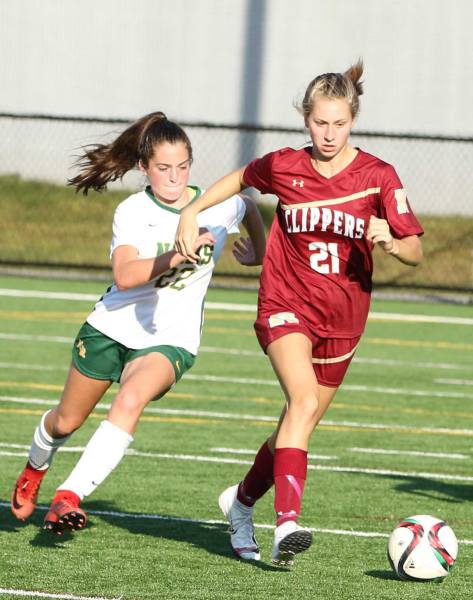 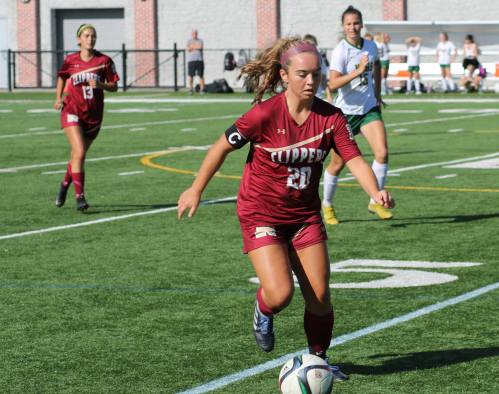 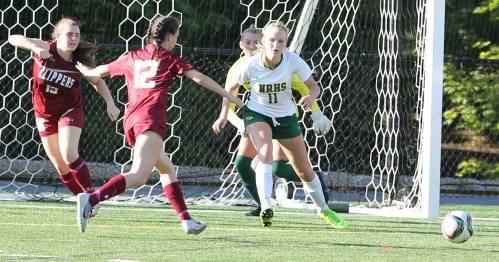