New Hampshire catches Villanova in the second half winning 28-20 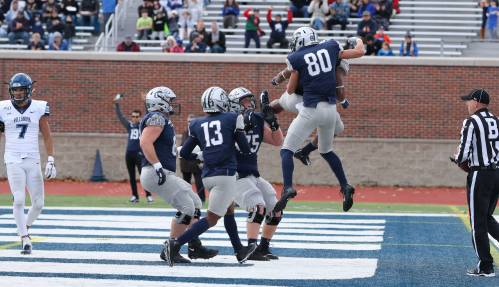 The NH Wildcats (5-3) turned offensive and defensive in the second half and erased a 20-7 halftime deficit and recorded a satisfying 28-20 win over the Villanova Wildcats (6-3) on Saturday afternoon in Colonial Athletic Association action.

The loss was the third straight for Nova and Coach Mark Ferrante expressed that frustration postgame: “We came out and put up a zero in the second half.  We need to figure out how we can play the full four quarters.”

New Hampshire remains undefeated at home (4-0) and owning the home field factored into their second-half turnaround, according to Coach Ricky Santos. “In the first half, they (Villanova) were playing downhill on us.  Halftime wasn’t so much the X’s and O’s.  It was a matter of challenging the guys.  Villanova was playing harder than us on our field.  No one in our locker room was going to allow that to happen in the second half.”

So, back came NH in the second half with three scores and a defensive shutout to grab the W.

Nova quarterback Daniel Smith dazzled in the first half (10/18 – 189 yards).  The Wildcats junior passed for a TD (Zac Kerxton) and ran for another (1 yard) on a fourth-down leap.

Second half it was NH’s Max Brosmer’s turn to shine.  The true freshman was 10/10 totaling 132 yards and two touchdowns (both to Dylan Laube).

Max had to recover from an interception (Keeling Hunter) in the last minute of the first half that cost NH some possible points.  “Max had a turnover right before the half,” recalled Coach Santos.  “It could have gone one way or another for him after that.  He internalized it, however, and wouldn’t let it stop him in the second half.”

Villanova QB Daniel Smith came into today’s game with twenty-one touchdown passes.  He added one to that total today.  He also came into the game with only seven interceptions over eight games.  Key stat?  NH picked him three times this afternoon.

Two of the NH interceptions (Randall Harris & Evan Horn) ended Villanova’s last two drives of the contest and both were close to the NH end zone.

Efficient use by Villanova of timeouts (an issue in an earlier loss) gave the visitors possession in a one-possession game (28-20) at their twenty with 1:49 left and no timeouts.  Daniel Smith used time-stopping sidelines passes and a long scramble to reach the New Hampshire thirty-two with twenty seconds left.  A pass attempt down the middle, however, was overthrown and defender Evan Horn intercepted and sealed the win for the home team.

Dylan Laube (20) scored twice in the second half

NH freshman back Dylan Laube twice swung out of the Wildcats backfield to beat Nova defenders deep.  In the third quarter, Dylan escaped senior Julian Williams to give NH the lead for good, 21-20. In the fourth quarter, Dylan added an insurance score.  This time it was linebacker Drew Wiley who was burned deep.

“We wanted to get Dylan matched up on a linebacker because we thought he could run by them,” explained Coach Santos.

Big plays by the offense and the defense in the game-changing second half.  Not to be overlooked, for certain, was the very important handiwork of punter Drew Sanborn in the final quarter.  Drew had a punt deflected by freshman Elijah Solomon in the first half which set up a Nova drive that ended with a TD pass to Zac Kerxton. 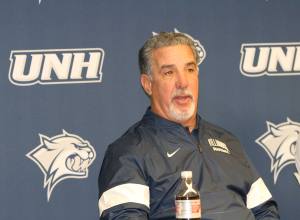 Villanova will play their next three games at home.  “We never got it going offensively in the second half,” explained Daniel Smith postgame.  “That can’t happen.  I’ve got to do a better job.”

I knew that I wasn’t covering a high school game when I stepped out of my truck at UNH about 1 ½ hours before the game started and was confronted with grills and enticing aromas!

The second quarter has been the best for Villanova all season.  They have outscored opponents 130-47 in the second period.

My thanks for Mike Murphy for arranging today’s visit for me.  The stats (pre and post-game) as well as the rosters are never taken for granted by those of us covering high school events. 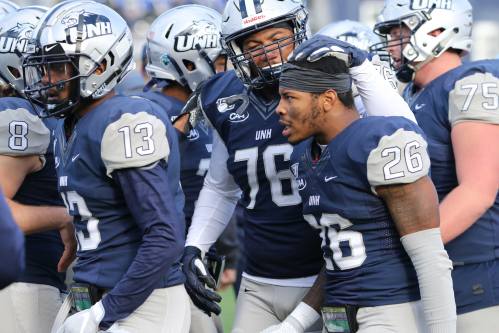 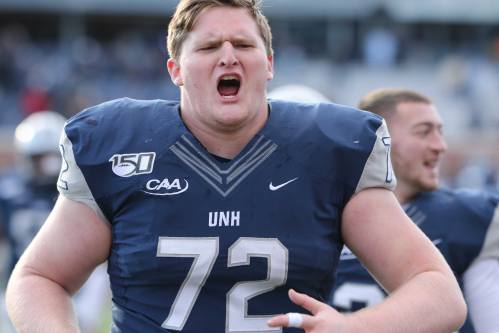 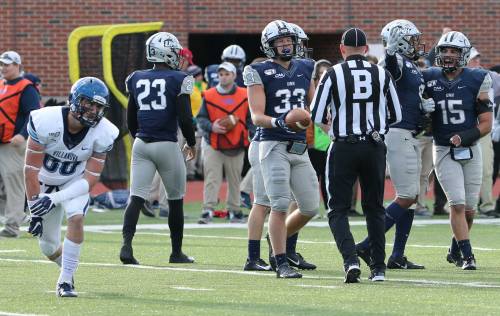 Max Brosmer on the sidelines

Max Brosmer (16) passes to the flat 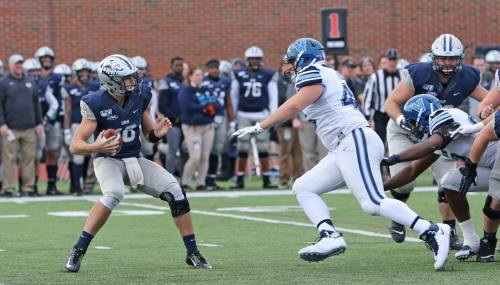