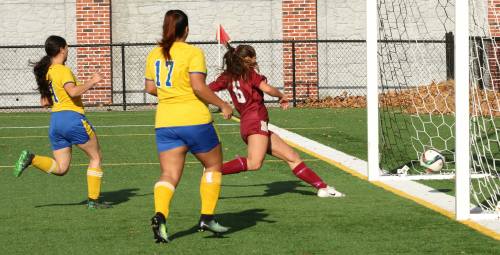 (Newburyport MA) The Clippers (10-6-3) scored early and often in their 11-0 Preliminary Round win over East Boston on Sunday afternoon.

Midway through the first half an EB long ball from midfield rolled to Newburyport keeper Anneliese Truesdale and the Clippers student section “cheered.”  Why?  That was the first and only ball that Anneliese handled during the entire half!

Meanwhile, down the other end, the Clippers applied pressure, pressure, and more pressure and the goals started adding up.

Newburyport coach Kevin Sheridan had everyone on his bench in action in the first half and used reserves for most of the second half.

East Boston coach Richard LaCara took note: “Newburyport is very, very skilled.  We appreciate everything that took place here.  It could have been a lot uglier than it was.  There was no running up the score.”

Senior Cricket Good paced the home team with two goals and an assist.

“Other people had good shots,” said Molly afterwards.  “The rebounds were there for me to run into.” 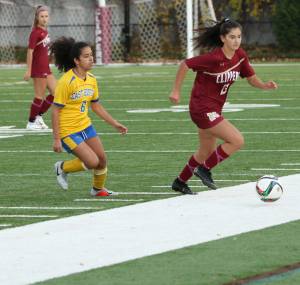 The goals today were Molly’s 2nd and 3rd of the season.

Senior Olivia Coletti started the scoring for NHS three minutes into the game.  Denied a minute earlier, Olivia fielded a deflected shot by Kelsey Soule and cashed an open netter.

Five minutes later one captain (Molly Elmore) was set up by another captain (Cricket Good).

Another five minutes Cricket used her strong left foot from the left side to beat GK Julianna Bonilla to the far side.

Another five minutes Maddy Felts turned a rebound into a 4-0 lead.

This was the point at which Anneliese Truesdale finally had to field a long roller from midfield.

The Clippers added three more goals in the first half to lead 7-0 at intermission.

“The girls played well,” said Coach Sheridan after the game.  “Everyone had a chance to play.  There was quality time for everyone in a tournament game.”

Junior Matigan DeFeo had a goal and two assists while Norah McElhinney added a goal and an assist.

Newburyport is in the Cape Ann League while East Boston plays in the Boston City League.

“Our goal is always to win the city championship,” said Coach LeCara.  “Whatever happens after that happens.”

The Jets lost in the city semi-finals.

Tuesday the Clippers will encounter #1 seed Stoneham in the First Round.  Trust me, “night-and-day” might describe the difference in competition Newburyport will face in that one.

At one point in the second half, the Jets had twelve players on the field before Coach LaCara realized it and got the attention of the extra player.

Soccer doesn’t have a mercy rule………or do they?  I believe that the second half (?) was played with running time.  Normally the clock stops after goals.

I did some last-minute homework on Newburyport girls soccer to see when the last time was that the Clippers were in the tournament.  Didn’t happen last year but in 2017 they reached the state semi-finals.  Who did they play in the First Round on November 4th?  East Boston.  Score?  12-0.  Two years ago at Stehlin Stadium.

Maddy Felts (15) watches her shot that turned into a goal

Molly Elmore (9) lines up a header 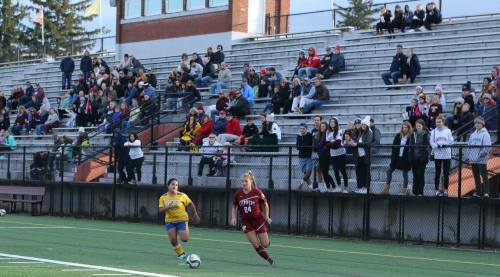