Gabby Hurlbert (11) gets to the basket for two of her twenty-one points. 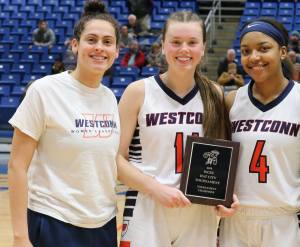 Third time in four years for the Colonials.

Gabby also won the award as a freshman.

The Saxon (4-7) had trouble scoring early and went down, 24-11, in the first quarter.  It looked like the start of a long evening, but the visitors from western New York made a game of it in the second period. 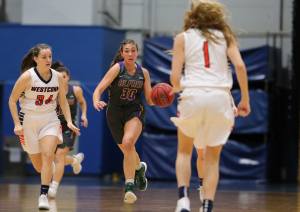 “Our key word for this weekend was “persistence,” explained AU coach Mike Moskowitz.  “You’re going to get knocked down.  You’re going to turn it over four straight times but that doesn’t decide the fifth time.”

The Saxons got within six points (33-27) and only trailed by eight at halftime.

“I kind of expected that our pressure would tire them out,” said WC coach Kim Rybczyk afterwards, “but it didn’t.”

West Conn’s offense picked up considerably in the second half.

“Sometimes we struggle fundamentally,” said Coach Rybczyk.  “We don’t make layups.  We don’t make the right pass.  We struggled in those areas in the first half but really pulled it together in the second half and made our breakaway.”

Gabby Hurlbert on a drive

Gabby was quick to the basket and set up teammates for scores.

“I was trying to find openings to the basket for myself and my teammates,” explained Gabby post-game.

The Colonials found openings to the rim most of the game.

“We chose to defend the perimeter,” said Coach Moskowitz, “and they only made four from out there.  But we gave them openings to the basket.”

WC had a remarkable fifty-four points in the paint.  During the first half some of the West Conn paint shots weren’t falling.  The second half they were and a 14-4 start to the second half gave the home team the separation needed to win the title game.

Last year the Colonials pressed full-court and shot quickly.  “I liked the style,” said Coach Rybczyk, “but we didn’t have the numbers to play it.  We had them at the start and put up some impressive stats but then we had injuries.  That style is not something you modify.  You can’t be in and out of it.  This year we’ve kept the full-court press but on offense we push the ball up the court quickly and we settle if we don’t have a shot.” 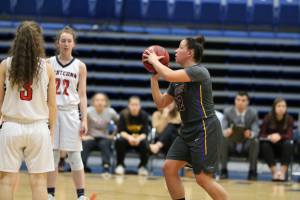 “Their press was very good,” said Coach Moskowitz.  “They have fourteen players used to that style and who are probably in better shape than we are at this point in the season.  We rarely see teams that press the way they do.”

Sophomore Kate Fanning made the All-Tourney team.  Kate had seventeen points in the opening round blowout of SUNY Delhi.

AU’s Ana Ion was selected for an All-Tourney award.  Ana (freshman) tallied twenty points versus Elms in the Saxons’ win on Friday night.

“Ana is a serious offensive threat,” said Coach Moskowitz.  “She can attack off the dribble.” 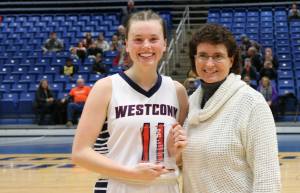 Gabby Hurlbert had nineteen points in the championship game in 2016 against Trinity to capture the MVP trophy that year.

Coach Moskowitz: “We spent a day in New York City.  We have kids from California, Texas, and Florida who hadn’t been.  Some of our western New York players hadn’t been, or hadn’t been recently, to NYC.  It was nice to be able to give them that opportunity.”

Gabby Hurlbert (about the team): “I was drawn to Western Connecticut by the family atmosphere.  From freshman year to my senior year I have loved every player I’ve played with.”

Gabby Hurlbert (about her future): “I will probably take a year or two of schooling beyond West Conn.  I want to be an ultra-sound or a radiology technician.”

Last time I was at the Feldman Arena was for my youngest granddaughter’s graduation in June from Newtown High School.

Gabby Hurlbert (11) gets her hand in the passing lane.

Gabby Hurlbert dribbles in front of the WestConn bench

Hannah Maghini (22) puts up a runner 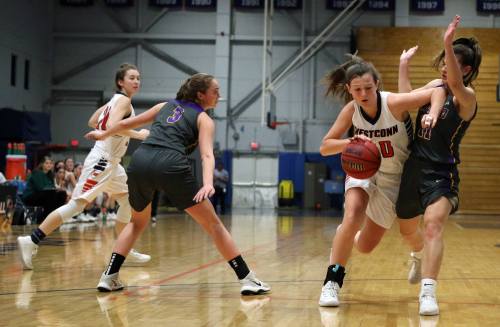