(Peabody MA) The two coaches called the game, “great” and “awesome,” and who could argue?

There were fifteen lead changes and six ties and there could have been one more lead change if Jason Romans (27 points) had connected on the game’s final 3-point attempt.

The Crusaders (4-2) had four-point leads in both overtimes but the Hornets (6-0) just wouldn’t go away.

Kellen Furse (29 points) down the lane

Senior Kellen Furse (29 points) had ten of his points in the fourth quarter as ME rallied back from a seven-point deficit.

“We press and we fast break,” said Kellen post-game.  “I was exhausted after the first quarter, never mind after two overtimes.  Our ability to sub in our one-minute guys to give us a break is huge.  Our depth is awesome.”

Fenwick led, 74-70, in the second OT after a Hornet turnover led to a Kobe Estes layup with 1:34 left.  Those, however, would be the last points the home team would get.

A rebound basket plus one by ME junior Jack Shaw (15 points) and an AJ Pallazola layup after a BF five-second inbounding violation put the Hornets on top for good, 75-74.  Kellen Furse would add a free throw in the closing seconds.

“We competed hard,” said Fenwick coach Kevin Moran afterwards.  “That’s a credit to the players.  Our execution probably wasn’t as good as it should have been.  That one is on the coaching staff.”

A turning point in the game may well have been when Fenwick’s tallest player, junior Christian Loescher (12 points), fouled out in the first overtime.

“My eyes lit up when that happened,” said ME coach Tim St. Laurent post-game.  “Christian is a very good player.  With him out, I knew that we could go right at them.”

“When we lost Christian’s presence, it made a difference,” recalled Coach Moran.  “He does tend to get himself in foul trouble once in a while.  He’s one of the better athletic big guys around.” 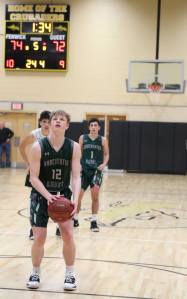 Jack Shaw at the line late in the game

The two teams were tied 59-59 with three minutes left in regulation.  Neither team could score in those last three minutes.  The Hornets missed four straight free throws in the final ninety seconds; two each by Kellen Furse and Jack Shaw.

“We haven’t shot much from the free throw line in a tight game like this,” explained Kellen Furse.  “Tomorrow at practice we’ll most definitely be running……..and shooting free throws!”

Sophomore AJ Pallazola covered high-scoring Jason Romans during most of the game.  “He’s a very good player,” said AJ.  “He can shoot and he’s tough coming off screens.”

Jack Shaw finished with fifteen points including seven in the first quarter.  He had two 3’s.

The Crusaders turned a 26-25 deficit in the second quarter into a nine-point lead with a run of ten unanswered points.  Both Jason Romans and Christian Loescher contributed two layups and Jason added two free throws for BF.

Manchester-Essex was down 40-32 in the third quarter before consecutive three’s (Mason Paccone, Alex Furse, Jack Shaw) put the Hornets ahead 41-40. 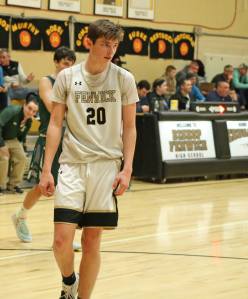 Bishop Fenwick used a zone defense while ME pressed full-court for the first half and went to a half-court man-to-man during the second half and in the two OT’s.

Coach Tom Comeau of Amesbury was in the house.  The Indians, like Manchester-Essex, are in the Cape Ann League and will face each other twice.

ME and BF played twice last season.  Both games were close.

Coach Moran: “Manchester-Essex is one of the top teams in D4.  We knew that they would be competitive.  They have seniors with lots of experience.”

Coach St. Laurent: “This was two of the best teams in Division 4 going at it.  This was high school basketball at its best.  Fenwick has great guard play and they have bigs that crash the boards.”

Kellen Furse: “This was such a big team win.  They are an incredible D4 team.  This gives us momentum going into our league stretch.”

AJ Pallazola: “It was very intense out there.  They were banging us, and we were bumping them.  We have to improve our foul shooting.” 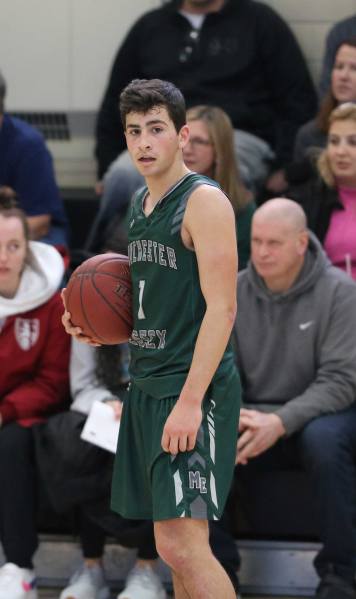 Jack Shaw (15 points) to the basket 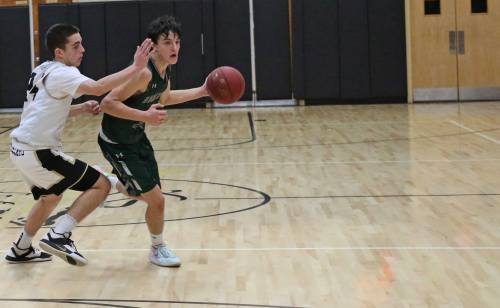 Kellen Furse in for two