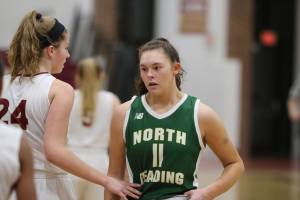 Julia Howse left with an injury in the second half

(Newburyport MA) Freshman Deirdre McElhinney turned a last-minute North Reading miscue into an old-fashioned 3-point play to give Newburyport the cushion needed to hold off the Hornets, 38-36, on Wednesday night.

Both D2 teams had scoring strengths, but tenacious defense minimized those strengths.

The Clippers (5-1) wanted to take advantage of their height inside, while North Reading (3-3) wanted their long-range shooting to spark them.

“It was a battle,” said NR coach Bob Romeo afterwards.  “We told the team before the game that this would be a one-or-two possession game, and it was.”

After a missed free throw (Sami Cavanaugh), the Hornets had twelve seconds to either tie the game or win it.  They got two shots off but under heavy pressure and couldn’t connect.

“I’m thrilled with how tough our kids were down the stretch against a good team,” explained NHS coach Karen Grutchfield.

North Reading had a six-point lead (10-4) after a Lauren Sullivan (9 points) breakaway in the opening period. 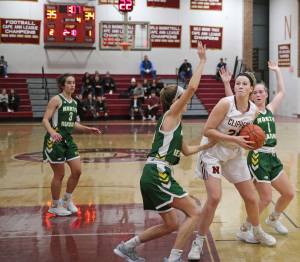 Abby Gillingham looks for her shot

Newburyport had a six-point lead of its own in the third quarter (24-18) after an Abby Gillingham layin.

The rest of the time it was close between the two Cape Ann League opponents.  There were six ties and five lead changes.

The visitors had a 3-point edge (32-29) five minutes into the final quarter after an Ali Grasso (12 points) long one.

The Clippers answered with their best collection of consecutive offense (six straight) over the next minute.  In the crucial run, senior Sami Cavanaugh started it by setting up junior Leah Metsker for a layup and then added a jump shot.  The other two points came on a perfectly executed inbounds play: Abby Gillingham set a screen for teammate Sadie Vandenberg along the foul line.  Sadie used the screen and rolled wide open into the lane for an uncontested layup. 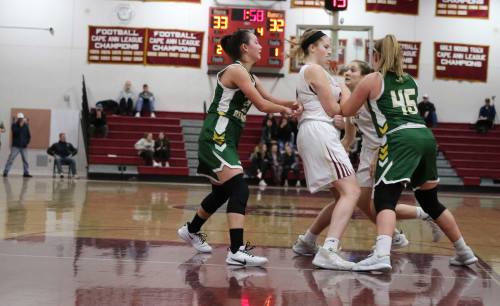 That run of points put NHS ahead by three. 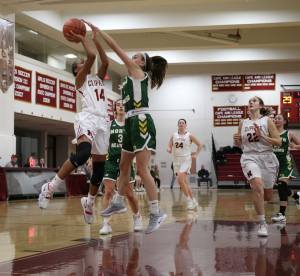 Makenna Ward has a shot blocked by Lauren Sullivan

The Hornets cut that lead to one (Lauren Sullivan rebound basket) and had the ball back in the last minute with a chance to do even better.  But the Clippers forced a turnover on the NR perimeter and Sami sent Deirdre off for the outcome-sealing layup + one.

“I felt that Anna Affolter (9 points) and Deirdre (7 points) really stepped up,” said Coach Grutchfield.  “Sami led us.  She’s the heart of the team.”

North Reading had five three’s.  Four of them came in the second half.

“We hit some big shots in that stretch when we got back into the game in the second half,” said Coach Romeo.

Several of the Clippers had turns guarding Ali including Anna Affolter and Deirdre McElhinney. 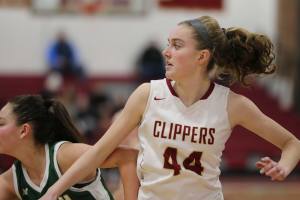 Leah Metsker looks for a pass

NR’s top inside presence (Julia Howse) injured herself diving for a ball going out-of-bounds early in the third quarter and didn’t return.

“We were a little short-handed when Julia (8 points) went out,” admitted Coach Romeo.

The Clippers (8-12 last year) are off to a nice start with their 5-1 record.  They have yet to face Pentucket, Masconomet, and Amesbury.  North Reading (3-3) has losses to Pentucket and Amesbury.

Pentucket coach John McNamara was in the house.

Coach Romeo on wearing green after all those years wearing Masco red: “I was due for some new clothes.”

Makenna Ward tries to pass inside 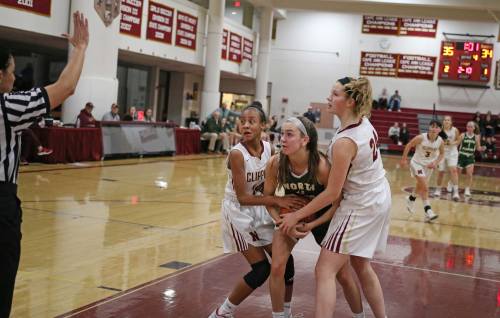 Lauren Sullivan gets a timeout for North Reading

Sami Cavanaugh spots Deirdre McElhinney ahead and in the open 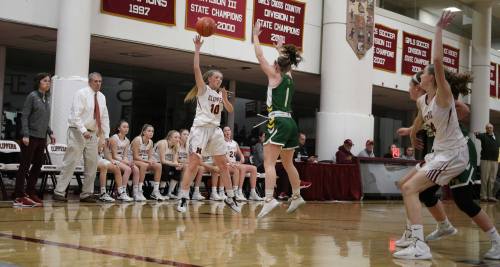 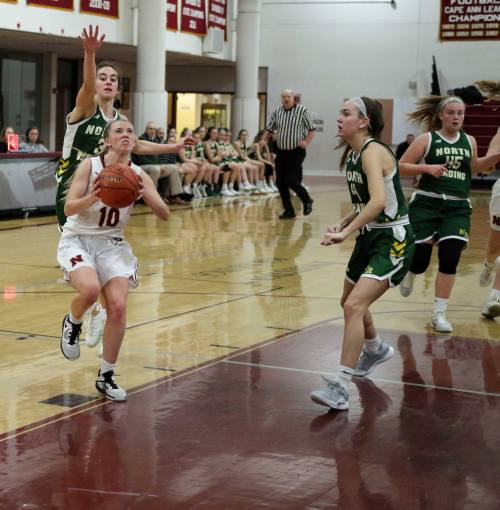 Sami Cavanaugh layup attempt with Ali Grasso over her shoulder 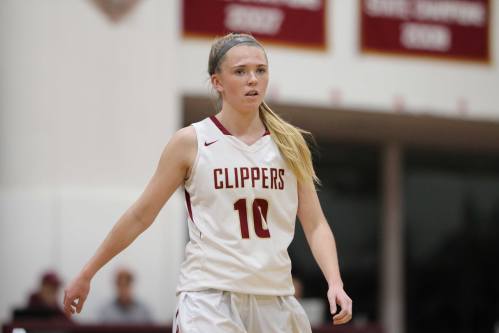 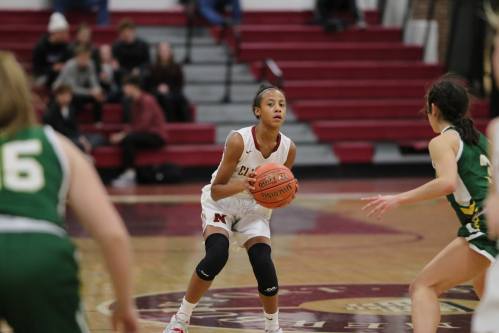 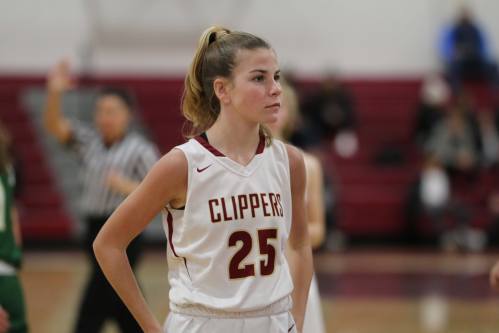 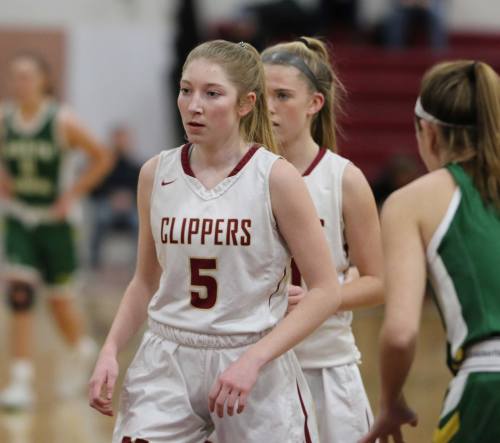 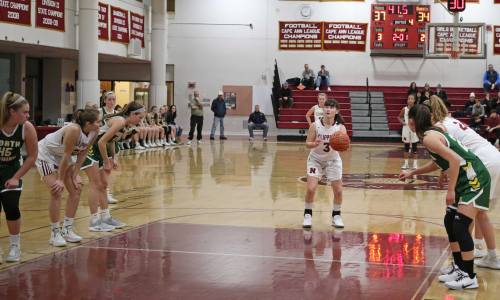 Deirdre McElhinney adds the plus one in the closing minute