Plenty of pressure applied game-long by Amesbury on Winthrop 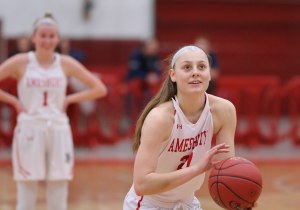 (Wakefield MA) Everyone knew her name.

There was chanting and singing. All in Alli Napoli’s direction.

And she smiled through it as Amesbury ousted Winthrop from the D3 North tournament with a 50-28 win on Tuesday night.

The Indians (20-2) get a rematch on Saturday against #1 seed St. Mary’s at the Tsongas Center. At stake will be the Division 3 North title.

The Amesbury defense was active and effective all night long.

And who could argue? Amesbury held the Vikings (15-8) to only a point over the final seven minutes of the first period and went off to a 16-3 lead. Winthrop never recovered.

Maura Dorr and Avery Hallinan battle for a rebound

“We struggled to score,” said Vikings coach Joe Lowe afterwards. “It’s been that way all year.”

The Indians played very little half-court offense because their defense was so disruptive. On this night their on-ball defense was influential in creating twenty-four Winthrop turnovers.

“If we can’t score in the half-court, we’ll struggle to generate pressure,” said Coach Lowe. “They played well defensively so they were part of the reason we had trouble scoring points.” 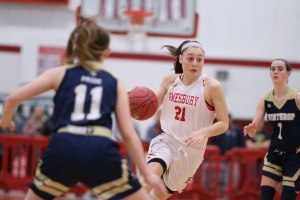 Alli Napoli on the fly

The Indians put their defense/offense neatly together some more in the third period. In the first five minutes Amesbury went on a 13-3 run and stretched their advantage to 37-16.

Alli was again in the middle of the good play. The AHS senior sparked the offense and defense. She also made a long pass to a cutting Gabby Redford that had “next-level” written all over it.

“They’ve been doing that all year,” said Coach Dollas. “I’m going to miss that next year.”

Alli laughed about it afterwards: “Maybe it was because it was my 18th birthday? It’s fun to play in front of a big crowd.”

After Amesbury got the twenty-one point lead (37-16) the Vikings suddenly found their touch from beyond the arc.

Coach Dollas reinserted some of his starters and the Vikings run ended. The Indians tallied that next ten points, including two baskets by Avery Hallinan (18 points), and they coasted in from there.

McKenna Hallinan: “We had to push the pace. We knew that they weren’t as quick as us. We tried to make it a track meet and run and score as much as we could.”

Coach Dollas on facing St. Mary’s: “There was a 45-point differential last time we played them. We may have to work on some defense! We’ll go out there and try to knock down one of the top private schools in Massachusetts.”

McKenna Hallinan on the St. Mary’s rematch: “We’re hoping to play our best and see where that takes us.”

Maura Dorr made All-Conference in the Northeastern Conference. Caroline Earl and Luly Pulsifer were All-Stars.

Maura Dorr gets a block in front of the Amesbury bench 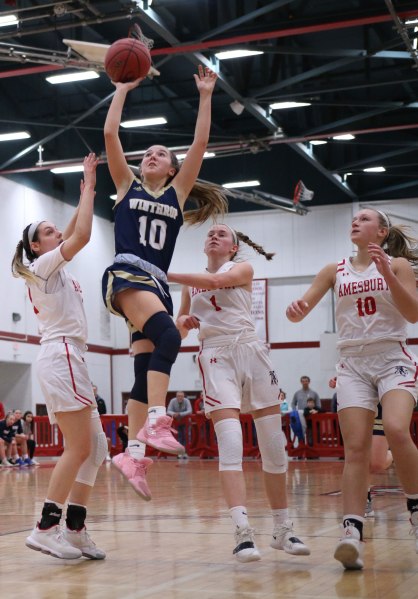 Freshman Maddie Stiglets in the air

McKenna Hallinan in the lane

Alli Napoli waits for a pass